The most important Viking sites in Denmark including Roskilde, Copenhagen and Jelling.

See some of the best-preserved ‘bog bodies’: Tollund Man and Grauballe Man.

Stay in central Copenhagen, the charming mediaeval town of Ribe and the important regional city of Aarhus.

Journey through idyllic countryside and visit the environmentally precious wilderness of the Wadden Sea.

Led by Dr Gareth Williams, leading expert in Viking history and curator at the British Museum.

A country with a fierce and proud national history, but which today is renowned for its excellent food, world-class museums and high standards of art, architecture and design, Denmark is a pleasure to visit. Its archaeological treasures include the collections of the National Museum in Copenhagen, the Viking ships at Roskilde and the exceptionally well-preserved Iron Age ‘bog bodies’ known as Tollund Man and Grauballe Man.

The peaceful and prosperous image of modern Denmark belies its roots as northern Europe’s first, and most aggressive, nation state. Between the eighth and the eleventh centuries ad, Danes attacked, conquered and colonised a wide swath of Europe. Bands of well-armed warriors spread out from its fjords and islands in ships of unrivalled quality and effectiveness. They travelled the northern seas, wreaking terror on indigenous populations and causing political chaos. Treaties and buy-offs, such as ‘Danegeld’ paid by the English under Æthelred ‘The Unready’, consolidated their power.

The keys to understanding Denmark’s rise as a centralised state are its compact geography and the ease of communication across its waterways and gently contoured landscape. Emerging from warring Iron Age tribes, a succession of ambitious and successful rulers established national defences, roads, bridges, canals and a network of towns. Trade and the new religion of Christianity prospered.

The high-point of the Viking Age occurred under the Jelling dynasty, which began with the reign of Gorm the Old in the early decades of the tenth century. Gorm’s son Harold Bluetooth, his grandson Svein Forkbeard and his great-grandson Cnut the Great presided over a ‘golden age’ of Danish achievement, marked by the construction of spectacular dynastic monuments and accompanied by astonishing artistic endeavour. Under Cnut, Denmark’s conquests extended to parts of Norway, Sweden, Germany and, its greatest prize, the Kingdom of England.

Copenhagen. Fly at c. 9.00am (British Airways) from London Heathrow to Copenhagen. Much of the surviving artistic finery of Denmark’s Viking Age, in metal, wood, bone and semi-precious stone, can be found in the National Museum, Copenhagen. One of the great museums of the world, it hosted the first stage of the Vikings: Life and Legend exhibition, which subsequently went on to the British Museum and Berlin. The National Museum’s prehistoric exhibits are also exceptional, and it has played a key role in the history of European Archaeology. First of two nights in Copenhagen.

Roskilde. Excursion to the small historic city of Roskilde to see the extraordinary Viking Ship Museum, where several original vessels and many reconstructions can be viewed. There is an opportunity to be part of the crew and sail a reconstructed Viking long ship into the Roskilde Fjord.

Trelleborg, Ribe. The well-preserved circular military fortress at Trelleborg is part of a network of similar ‘command and control’ sites across Denmark. Picturesque mediaeval Ribe is Denmark’s oldest town, and one of the earliest in post-Roman Europe. First of two nights in Ribe.

Wadden Sea, Ribe. Spend the morning at the environmentally precious wilderness of the Wadden Sea. In the afternoon visit the excellent Viking Museum in Ribe. Some free time.

Ravning, Jelling, Silkeborg. There is a short walk to Ravning, the site of the Viking bridge built by Harold Bluetooth across the Vejle valley, 760 metres long and over five metres wide. The small eastern Jutland town of Jelling, now a World Heritage Site, preserves a vast stone ship-setting, two immense burial mounds and the rune-stones of Gorm and Harold which record the early history of their dynasty. These stand outside a stone church, emblematic of the rise of Christianity. In Silkeborg see the best-preserved Iron Age bog body known as Tollund Man. The final three nights are spent in Aarhus.

Moesgaard, Aarhus. In a charming countryside setting, the state-of-the-art museum at Moesgaard, designed by Henning Larsen Architects, opened in 2014. It houses exhibitions on prehistory, including Grauballe Man who was discovered in a peat bog in 1952 and dates to the 3rd century BC. Return to Aarhus for some free time.

Lindholm Høje, Aalborg, Fyrkat. Head north to Lindholm Høje, a major late-Viking burial site. Rare ship monuments (burial sites demarcated by stones in the shape of ships) are found as well as hundreds of burial sites marked with stones or mounds. Stop in the pleasant market town of Aalborg for lunch before visiting the Viking fortress of Fyrkat.

Ladby, Copenhagen. The only ship burial discovered in Denmark, the Ladby boat is a Viking chieftain’s burial vessel. The wood of the 22-metre ship has long since rotted away but left a perfect impression in the earth. Buried with 11 horses and many valuables and possessions, the skeletal remnants of the animals are all that remain of the contents. Fly from Copenhagen to London Heathrow, arriving at c. 6.20pm.

Air travel (Euro Traveller) with British Airways (Airbus 319 & 321); travel by private coach for all transfers and excursions; hotel accommodation as described below; all breakfasts, 1 lunch and 5 dinners with wine, water and coffee; all admission charges; all tips for restaurant staff, drivers, guides and porters; all taxes; the services of the lecturer.

Phoenix Copenhagen, Copenhagen: a traditional 4-star hotel close to the Amalienborg Palace. The Dagmar Hotel, Ribe: a characterful 3-star hotel on the town square with views of the cathedral. Hotel Royal, Aarhus: a 4-star in the centre of Aarhus, public rooms are opulent and luxurious while bedrooms are classic and comfortable. Single rooms are doubles for sole use throughout (though small doubles in Ribe).

Walking is necessitated over the uneven terrain of Viking sites. There is quite a lot of standing in museums. There are two hotel changes. The optional boat trip in Roskilde involves manning the oars. Average distance by coach per day: 92 miles. 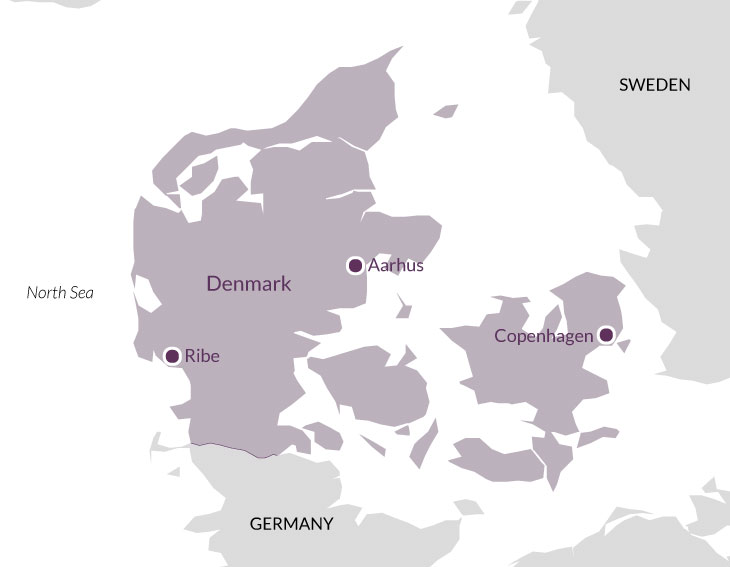