A Festival of Music in Franconia with six country walks and seven private concerts.

Musicians of the highest calibre, from Germany, Austria, Belgium, Italy and Britain.

Baroque and Classical music appropriate to the buildings in which it is performed.

This tour continues the highly popular format developed several years ago for The Danube Music Festival and inaugurated in 2016 for A Festival of Music in Franconia. While most of the participants on these festivals eat and sleep on board a river cruiser, a small group stays in hotels and undertakes walks on most days through some of the most attractive stretches of the countryside in the vicinity of the river and the concert venues. Further details of the festival can be found online or in the dedicated brochure.

Fly at c. 9.00am from London Heathrow to Munich (British Airways). Drive directly to Kelheim at the confluence of the Danube and the Altmühl, otherwise known as the Rhine-Main-Danube Canal. Visit the Befreiungshalle, built to commemorate the German victory over Napoleon, before an afternoon woodland walk with Danube vistas (c. 5km). The walk ends at Weltenburg Abbey, an outstanding example of Baroque architecture with decoration by the Asam brothers. Continue to the beautifully preserved mediaeval town of Regensburg. First of two nights here.

Morning lecture followed by attending the morning concert at the Salzstadl from In Echo and Alex Potter (counter-tenor): Echoes of the Danube: the Flow of Habsburg Power. Power and influence flowed from 17th-century Vienna and across the Holy Roman Empire, and Regensburg, the Imperial capital, was a hub of Italianate music and culture. Archives across the former Habsburg lands house works by Italians such as Rigatti, Rovetta, Sances, Pandolfi-Mealli and Bertali. Composers from north of the Alps could nevertheless flourish in this environment, as evidenced by the success of composers like Muffat, Biber, Johann Schenck and the Franconian Kapellmeister Johann Staden. An afternoon walk, c. 8.5km along the Alpinensteig (so named by the locals because of the likeness to the alpine landscape), with wide-reaching views of the valley and down to the Laber, a tributary of the Danube. Overnight in Regensburg.

After the morning lecture, depart for a 6.5km walk along the Naab from Duggendorf to Kallmünz, which has a beautifully preserved medieaval centre. Continue to Ansbach for the afternoon concert at the Residenz from Amphion Wind Octet (Xenia Löffler; oboe, director): Mozart & Bohemian friends, Myslivecek, Družecký, Triebensee. Many of the best wind players in 18th-century Europe were Bohemians by birth, including most of those for whom Mozart composed. This programme presents Mozart’s Serenade in C minor (K.366), pieces by Josef Mysliveček and Jiří Družecký, and Josef Triebensee’s arrangements of Mozart’s Don Giovanni. Then drive north to Bamberg, arriving at the hotel in time for a light supper. First of three nights in Bamberg.

Some free time in Bamberg. Drive south for a picnic lunch and a walk (c. 9km) in the rolling hills around Pommersfelden before arriving at Schloss Weissenstein, country retreat of Bishop Lothar Franz von Schönborn. Afternoon concert with from La Serenissima (Adrian Chandler; violin, director): The Four Seasons. La Serenissima’s highly acclaimed recording of Vivaldi’s I Quattro Stagioni is the outcome of over two decades of thought and study. This is no ordinary performance, but one whose originality, passion and brilliance may persuade you that you have never heard the piece played properly before. The afternoon’s setting is ideal – a Baroque hall in lovely countryside (though we cannot promise a thunder storm). Pieces by Mossi, Telemann and Pisendel furnish the first half of the concert. Overnight in Bamberg.

Drive west to Volkach, in the heart of the Franconian wine-producing region. A morning walk of c. 9km through vineyards overlooking the Main includes a picnic lunch. Return to Bamberg for a free afternoon. Drive out to Schloss Seehof for the evening concert from Sonatori de la Gioiosa Marca (Dorothee Oberlinger; recorder, director): Flauto Veneziano: music for recorder. Final night in Bamberg.

After a morning lecture, drive to Schloss Faber Castell for the morning recital from Dorothea Röschmann (soprano) and Malcolm Martineau (piano): Lieder recital – Late Romantic songs. The programme will include songs by Gustav Mahler and Alban Berg, which are contemporary with the wonderful wall paintings in the hall. Mahler’s Rückert-Lieder, settings of poems written by Friedrich Rückert, were first performed in 1905, and Berg’s Seven Early Songs date to 1905–08. Then continue to Nuremberg city centre where there is an optional guided walk and free time before the 5.30pm concert at the Altes Rathaus from Albion String Quartet: String quartets: a German programme. The programme contains some of the best-loved and most moving string quartets by German-speaking composers (at the time of composition the present-day distinction between German and Austrian did not apply): Haydn’s Emperor Quartet (Op.76 No.3), which famously includes the German national anthem, Beethoven’s Harp Quartet (No.10) and Schubert’s Quartet No.14, Death and the Maiden. After the concert continue to Regensburg for another two nights.

An imposing structure imitating the Parthenon commissioned by King Ludwig I, Walhalla was built to commemorate ‘laudable and distinguished Germans’. A circular walk of c. 6km begins with a steep climb to Walhalla. Visit the interior before continuing back to Donaustauf. Return to Regensburg for a free afternoon. Evening concert at Schloss Thurn und Taxis from the Freiburg Baroque Orchestra: German Classical Composers. The programme consists of symphonies by Haydn (No.41 in C) and Mozart (No.29 in A, K.201) and concertos by Franz Benda (Flute concerto in E minor) and Ignaz Holzbauer (Oboe concerto in D minor). Final night in Regensburg.

Drive to Munich Airport and return to Heathrow at c. 1.45pm.

Flights (Euro Traveller) with British Airways; admittance to 7 private concerts on A Festival of Music in Franconia; hotel accommodation as described below; travel by private coach; breakfasts, 1 picnic lunch and 6 dinners with wine, water, coffee; admission to museums etc.; tips for waiters, drivers, guides; the services of the lecturer and tour manager.

This is a walking tour. You must be in good physical condition and to be used to country walking with uphill and downhill content. There is not always the opportunity to return to the hotel to freshen up before every concert or dinner. 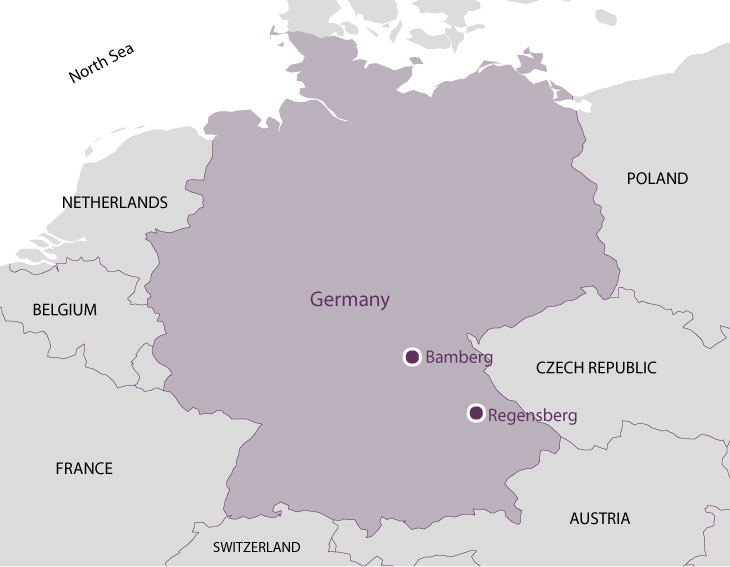 The whole trip was completely fantastic, a wonderful blend of walking and music with wonderful hotels. The concerts were superb and the venues were stunning. It was a masterpiece of amazing organisation and logistics.

Really lovely diverse concerts in beautiful locations. Could not have been bettered.

The tour manager could not have looked after us better. His attention to detail and kindness was such that we all wanted to take him home with us! The lecturer was an erudite, intelligent and passionate expert on music. He increased our enjoyment of the concerts and was a charming travelling companion.

I consider this trip excellent value for money. It was a really special experience that money cannot buy. Well done Martin Randall Travel.

Our fifth MRT tour, and the best – in fact one of the best holidays we have ever had. It was a particularly enjoyable and stimulating group which helped to make it such a successful holiday, as well as the tour manager and lecturer, and, of course, some superb music.