Four walks of between 5 and 9.5 km in the lush landscapes of vineyards, rolling farmland and wooded hills.

Stay in one hotel throughout, a charming listed building in the centre of Colmar.

Marc Millon is a wine, food and travel writer, and author of The Wine & Food of Europe.

Alsace, arguably the prettiest wine region in France, is also one of the best to explore by walking. Footpaths lead across a carpet of vineyards that extends over the lower slopes of the Vosges mountains. Tall pointed steeples, often topped with storks’ nests, peek out from above the rolling slopes; visible markers connect villages filled with sandstone buildings and charming half-timbered mediaeval houses with window boxes overflowing with colourful geraniums. Undoubtedly the best time to visit is September, when there is a buzz of activity as the grapes are being brought in to wine cellars and the heady smell of pressed grape must, fermentation and new wine is in the air.

Wine producers take time off from their exertions to warmly welcome visitors, happy to explain the intricacies of their terroir, their style and range of wines, and to offer generous samples to taste. In historic towns and villages along the way, Winstubs offer further opportunities simply to enjoy the distinctive wines of Alsace, served in delicate green-stemmed goblets.

And what wines! Alsace’s turbulent past – annexed by Germany after the Franco-Prussian war in 1871, retaken by the French after World War I, once again occupied by the Germans during World War II – has resulted in a range of varietal wines that reflect a mixed heritage. Teutonic-sounding grapes such as Riesling, Sylvaner, Gewürztraminer and others are vinified in the Gallic style to result in a range of wines that are archetypically and undoubtedly French: classic (mainly) dry, forceful white wines that are meant to be enjoyed with meals.

If the wines of Alsace reflect the region’s historic past, so does its renowned gastronomy. German sauerkraut here translates into choucroute; French culinary expertise raising the mundane to the sublime: the lightly fermented cabbage simmered with spices in Riesling wine to accompany a veritable mountain of outstanding sausages and cured meats of the region. Foie gras from the fattened livers of ducks and geese is a longstanding speciality here, while, in addition to charcuterie, magnificent picnic foods include tarte à l’oignon, local cheeses such as Munster, and of course delectable and colourful pâtisseries made from the abundance of local and seasonal fruits (many of these same fruits are distilled into clean and powerful eaux de vie). Restaurants range from the humble and simple to refined and famous temples of gastronomy.

While the main focus of the tour is the wine and walking, there is also time to appreciate the immensely rich artistic and cultural heritage of Alsace. A leitmotif of the tour is the collection of late mediaeval altarpieces and mediaeval church architecture, both Romanesque and Gothic.

London to Colmar. Fly at c.8.30am from London Heathrow to Basel (British Airways). By coach to Colmar, an exceedingly attractive town with richly ornamented half-timbered and stone buildings lining the streets and canals, it’s position in the foothills of the Vosges makes an ideal base for walking tours. Lunch is followed by an introductory tasting at the Domaine Viticole de Colmar. Dinner in Colmar where all five nights are spent.

Colmar, Wintzenheim. A tour of Colmar with a local guide, including two of the city’s splendid churches, ends at the Musée d’Unterlinden, with an outstanding collection of 15th- and 16th-century pictures, chief of which is Grünewald’s Issenheim altarpiece, the most searing of all images of the Crucifixion. In the afternoon drive to Wintzenheim for a wine tasting at Josmeyer.

Bergheim, Ribeauvillé, Colmar. Drive to Bergheim to begin an easy walk along part of the Alsace wine route: 5 km, c. 1½ hours. The path is mostly level through fields and on grass through the vineyards, though there is little shade. After lunch drive to Rorschwihr for a tasting at Rolly Gassmann and then return to Colmar for some free time.

Munster, Ammerschwihr. A challenging walk in the foothills of the Vosges. Beginning with a steep climb from Munster Haut-Rhin, this is a circular route on country lanes, farm tracks and woodland paths, which passes through picturesque villages and farms: c. 9.5 km, c. 3 hours. Lunch, to taste tarte flambée made with Munster cheese and a tasting at the JB Adam winery in Ammerschwihr before returning to Colmar.

Kaysersberg. Drive to near Kaysersberg to begin a challenging walk across the First World War battlegrounds east and south of the highly strategic Tête des Faux mountain peak, where French and German troops fought with heavy losses between the end of 1914 and the beginning of 1915. Starting at 940m we begin with a climb to reach 1,130m at the Roche du Corbeau in the woods before making our way back through pastures and farmlands: 6 km, c. 3½ hours. Lunch is in Kayserberg where there is a chance to see this remarkably unchanged mediaeval village with delightful houses, castle, bridge and a church with a very fine carved altarpiece. In Colmar, an evening tasting of a range of eaux de vie.

Rosheim, Obernai. A day of small places, beginning in Rosheim which possesses a number of unspoilt mediaeval houses and the 12th-century church of Saints Pierre et Paul. The easy morning walk ascends to vineyards before levelling off over fields to Obernai which is partly surrounded by fine ramparts: 5 km, c. 1¾ hours. Wine tasting at Robert Blanck and a tour of the Romanesque church of St Pierre before returning to Colmar where dinner is at a Michelin-starred restaurant.

Flights (Euro Traveller) with British Airways (Airbus 319); private coach travel; accommodation as described below; breakfasts, two lunches and four dinners with wine, water, coffee; all admission to museums and churches; tips for restaurant staff, drivers; all state taxes; the services of the lecturer and tour manager.

Maison des Têtes, Colmar: a charming, independent 5-star hotel located in the historic centre of Colmar. Rooms are traditional in style. Included dinners are at the hotel and at selected restaurants in Colmar. Single rooms are doubles for sole use.

This is a walking tour, graded moderate. Of the 4 walks, 2 are easy and 2 are challenging. It is essential for participants to have appropriate walking footwear, be in good physical condition and to be used to country walking with uphill and downhill content. Average distance by coach per day: 22 miles. 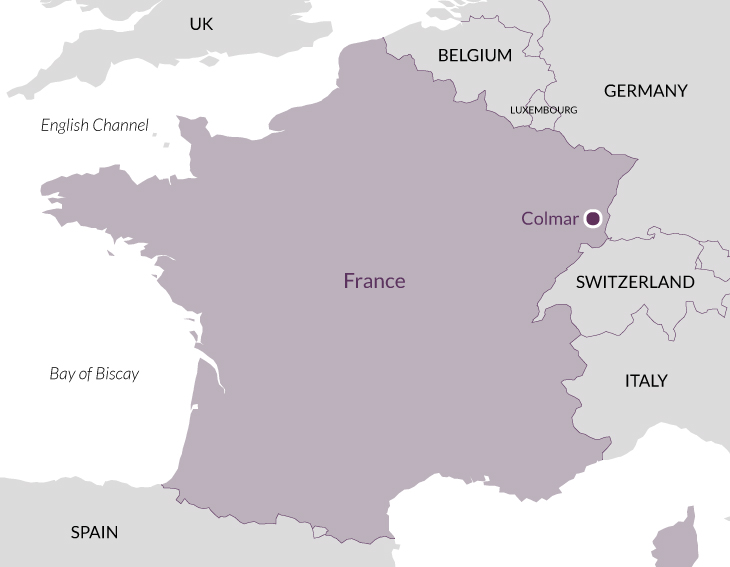 'We came back with a smile on our face and enthusiasm in our hearts, so it has to be good value.'

'The towns, vineyards and wineries visited were excellent choices, and the art was of great interest.'

'I have been on a number of Martin Randall holidays and this was easily one of the best.'