Wines of Bordeaux - Châteaux and vineyards, tradition and innovation

Tutored tastings and visits to eight châteaux from St Estèphe to Sauternes.

Accompanied throughout by a Master of Wine, expert in Bordeaux wines.

Bordeaux stands proud on the banks of the Garonne, with its glorious eighteenth-century architecture testament to the golden age of trade with far-flung destinations, at one time only rivalled in Europe by its northern former-ruler, London. But Bordeaux is firmly situated in the south, its long hours of sunshine conducive to sitting at open-air cafés in grand squares, and drinking wine.

For wine and its trade are at the heart of Bordeaux’s prosperity. The Gironde estuary north of the city is not only a positive influence on the temperature and soils of the nearby châteaux, but has been the conduit for their wines to be shipped to foreign markets for centuries. The vine was introduced to the region by the Romans in the first century ad, but it was the 1855 classification of the Médoc and Sauternes which firmly established its burgeoning worldwide reputation for quality. In spite of more recent international competition, the eyes of the world are still drawn to these top appellations for their expertise and complex wines.

It is thrilling to travel by road between neat rows of vines punctuated by fairytale châteaux, their familiar names such as Pichon Baron or d’Yquem discreetly inscribed over imposing gateways, so imposing as to discourage the casual visitor. But the facades belie the welcome and enterprise that await us behind the closed doors we are opening on this tour. Ancient, or occasionally starchitect,  walls surround modern, shiny, squeaky-clean stainless-steel tanks, and vast temperature-controlled underground halls of new-oak casks are designed to make these renowned wines consistently ‘précis’.

It is said that to make a small fortune in the wine business, you need to start with a large one. Bordeaux is no exception, with many châteaux owned by large corporations, or more boutique wineries run as vanity projects for their individual proprietors. But all of the wonderful wines tasted on this tour are made by teams of people passionate about what they do, many of whom we shall meet, and who bring to life the story behind the science.

Bordeaux. Leave Bordeaux Airport following the arrival of the flight from London Gatwick (easyJet, currently 9.25pm) (flights are not included - see ‘Practicalities’). Transfer to the hotel. All six nights are spent in central Bordeaux.

Bordeaux. A morning introductory lecture and tutored tasting in Bordeaux of representative white and red wines. After lunch visit the contemporary Château les Carmes Haut-Brion designed by Philippe Starck and the architect Luc Arsène-Henry on the outskirts of the city.

Pessac-Léognan, Sauternes. Today’s journey south is to Pessac-Léognan to appreciate its white wines. The appellation was created in the 1980s largely by the revered André Lurton of Château la Louvière where we taste wines from the estate and elsewhere. The influence of the river Ciron, near the diminutive village of Sauternes, is key to the development of noble rot. Château d’Yquem opens its doors to us for a tour of its spectacular cellars which culminates in a tasting. In order to enjoy more personal visits, the group is required by Château d’Yquem to divide in two today, and travels by minibus.

St Émilion, Pomerol. A Merlot day.Drive east to the charming, medieval town of St Émilion and visit the traditional Premier Grand Cru Clos Fourtet, acclaimed for its terroir. After some free time for an independent lunch and exploration in the town, it is a short journey to the smaller, but celebrated appellation of Pomerol and its opulent and velvety wines. The compact, modern Château Petit-Village is located at the highest point of the gravel plateau, neighbouring le Pin and Pétrus.

St Estèphe, Pauillac. Driving through Pauillac, Château Pichon Baron Longueville plays host in the 19th-century fairytale turrets, but makes its superb Cabernet-dominated wines in modern, neo-Egyptian cellars. Return through the expanse and beauty of the Haut-Médoc to reach St Estèphe and specifically the privately-owned Cos d’Estournel. The extensive and exotic 19th-century exterior is mirrored in the ultra-modern interior where we taste deep-coloured, long-lived wines.

Bordeaux, Margaux. Free morning to visit la Cité du Vin or for independent exploration of Bordeaux. In the afternoon return north to Château Kirwan for a visit, tasting and dinner.

This gives a fair picture of the tour, but there may be substitutes for some places mentioned and the order of the visits will possibly differ.

Travel by private coach; hotel accommodation as described below; breakfasts, 3 lunches and 3 dinners (with wine, water and coffee); all admissions (including la Cité du Vin); all tips; all taxes; the services of the lecturer and tour manager.

Flights are not included

Flights are not included in the basic tour price because the most convenient outbound flight is with easyJet and we cannot make a booking without knowing the passenger name. We can book flights on your behalf, quoting the fare at the time of booking, or you can make the bookings yourself. Suggested flight details are provided with your Confirmation of Booking, but please contact us if you require details sooner.

There is a considerable amount of walking and standing in possibly muddy vineyards and cool cellars. Average distance by coach per day: 39 miles. 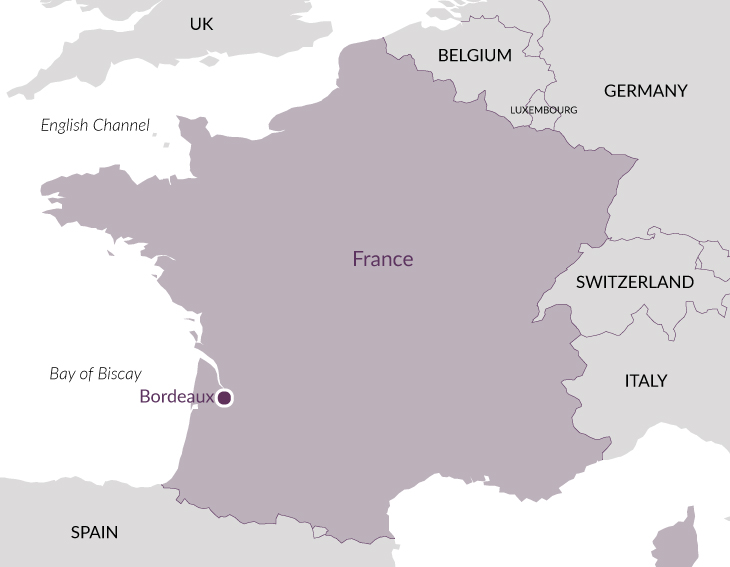