Short but comprehensive survey of mediaeval ecclesiastical building in Yorkshire.

Based in York throughout.

Monastic ruins across the North Yorkshire Moors at Lastingham, Rievaulx and Byland.

Famed for its Cistercian ruins and the quality and virtuosity of its fourteenth-century architecture, Yorkshire boasts the richest collection of mediaeval churches to survive in northern England. Unusually, it is also an area where one might pick out examples from every important phase of church building in mediaeval northern England – from the early Anglo-Saxon crypt surviving from Wilfrid’s Ripon to Marmaduke Huby’s magnificent early sixteenth-century tower at Fountains Abbey.

That said, the tour develops around two overlapping themes. The first is monasticism, or at least the type of monasticism that was re-established in northern England, at Lastingham, following the Norman Conquest. This monasticism took a dramatic turn in the twelfth century with the establishment of the great Cistercian houses of Yorkshire. We visit the three most significant abbeys, Rievaulx, Byland and Fountains.

The second tour theme is aesthetic and concerned with the type of architecture that developed in the later Middle Ages. As with much of eastern England, Yorkshire experienced a large-scale rebuilding during the period c. 1290–c. 1420, the greatest evidence for which is to be found in the churches of York, Beverley, Howden and Selby. Distinctive approaches to the ‘Decorated’ interior are a great feature of Yorkshire churches, immeasurably enhanced by the survival of considerable quantities of stained glass. Good examples of glass are encountered in profusion at York Minster and survive in a number of the smaller parish churches.

York. The coach leaves at 1.30pm from York railway station for the short drive to York Minster, the largest of English mediaeval cathedrals. Above ground it is all Gothic, from Early English to Perpendicular but predominantly 14th-century, and demonstrating an exceptional knowledge of the latest French Rayonnant ideas. It is a treasure trove of stained glass, and the polygonal chapter house is without peer.

Lastingham, Rievaulx, Byland. Venture up into the North Yorkshire Moors to Lastingham, and an exquisitely sited small monastery with a tiny early Romanesque crypt. In Rievaulx, see the major Cistercian monastery whose choir still rises majestically above the River Rye. The second of the day’s Cistercian ruins, in Byland, has enthralling remnants of an early Gothic choir and west front.

Howden, Selby, York. Howden is an important late thirteenth-century collegiate church and Selby, a wonderfully rangy and ramshackle Benedictine abbey church. As befits a major mediaeval city, York played host to a plethora of monasteries and parish churches over and above its Minster. Two of these form the afternoon: Holy Trinity, Goodramgate and All Saints, North Street.

Beverley. Beverley Minster’s magnificent marble-enriched choir acts as a superb foil for the extravagances of the later Middle Ages. See the Percy Tomb, stalls and famously historicising nave. St Mary’s, Beverley, is an ambitious giant of a parish church – some free time in York.

Fountains Abbey. A morning to the west of York at Fountains Abbey, a monastery originally founded by a dissident community of monks from St Mary’s, York. By the Dissolution, it had grown to become the richest Cistercian house in Britain – quite simply the greatest of all English mediaeval ruins – the coach returns to York station by 3.00pm.

Travel by private coach; hotel accommodation as described below; breakfasts and 3 dinners with wine, water, coffee; all admissions; all tips; all taxes; the services of the lecturer and tour manager.

The Grange Hotel, York. A 4-star hotel in York in a converted Regency townhouse a short walk from the Minster and just outside the mediaeval walls. Rooms are elegantly decorated, but some are not large. Some rooms are noisy from passing traffic and there is no lift. Dinners are in the hotel restaurant or at good restaurants within walking distance. Single rooms are doubles for sole use.

The tour involves a lot of walking where coach access is restricted, and a lot of standing in churches. Uneven ground and irregular paving are standard. A good level of fitness is essential. You will be on your feet for lengthy stretches of time. Average distance by coach per day: 47 miles.

Combine this tour with 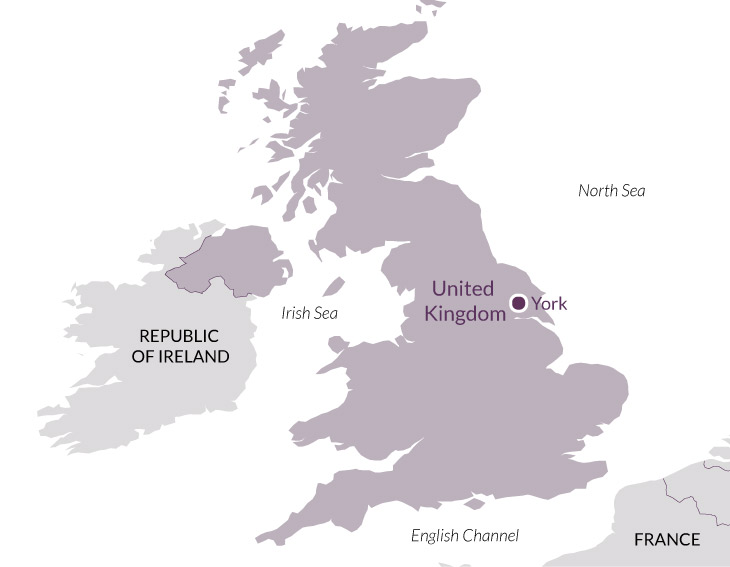