In Dublin, an in-depth study of the struggle for Home Rule and the early years of the Republic.

In the North, examine The Troubles in Belfast, Derry-Londonderry, rural areas & the border.

Led by Patrick Mercer obe, historian, former soldier and politician who served in the North.

Contributions from people with special insight into the troubled past and the febrile present.

This is a history tour of exceptional vividness, potency and contemporary relevance. The Good Friday Agreement was reached in April 1998; for most people who lived in Britain or Ireland for any significant span of the preceding thirty years, ‘The Troubles’ were probably felt as the dominant issue of the day, an ever-present source of anxiety, bewilderment and distress.

Only by duration and impact on mainland Britain, however, was this an exceptional period in Irish history. During the ‘Ascendancy’ following the seventeenth-century conquest, and throughout the nineteenth century after the Act of Union of 1800, relations between the English and the Irish, and Protestants and Catholics, were at best sultry, were frequently hostile, sometimes violent. Recrudescence of the cycle of protest, insurrection and oppression was a regular occurrence.

The tour takes you to the sites of flash points and political and sectarian confrontations of the last hundred years. In the North, you go to places where only a few years ago civilians would not have dared to visit; this is not a tour for the faint-hearted. Nevertheless, you will find warmth, welcome and courtesy on both sides of the border.

Starting in Dublin, the tour first focuses on Home Rule and the events leading up to the Easter Rising of 1916. Subsequent writing tends to emphasise the romanticism of the Rising, never better than in Yeats’s line, ‘A terrible beauty is born’. Yet that was not how it was seen at the time. While Britons bled on the Western Front, rebels rose up and delivered what many regarded as a stab in the back, and the Crown, in turn, reacted bloodily.

That clumsy cruelty not only caused sympathy to turn but led to a chaotic Partition in 1922, a shocking civil war and dreadful brutality by all sides. The raw emotions of those years will be stripped bare by this tour: the links between Eire’s agony and modern Ulster’s political turmoil will be explained by people who were – and still are – involved in the convolutions that dominate Ireland today.

As the tour moves to Northern Ireland, so the tensions that caused resentment to bubble over in 1969 will be examined. The tour acquires particular edge from the fact that the speakers were participants in the Troubles one way or another. Patrick Mercer, a historian steeped in Ireland’s past, is a former politician and soldier whose regiment was foremost in 1916 and who himself served during the most harrowing times of the conflict. He is joined at points by individuals from different sides of the sectarian divide with very different views.

The blame is often laid solely at the feet of either the IRA or the British Government but of course the situation was complex and nuanced. The speakers trace the simmering resentment between Republicans and Loyalists, the political and social impasse, the role of the police and soldiers who tried to keep order – and their intermittent bloody blunders – and the anguish of the people caught in the middle.

Dublin. The tour begins at 3.00pm with an exploration of the key sights of the 1916 Rising, beginning around the General Post Office in O’Connell Street, the rebel headquarters and site of the Provisional Government’s surrender, and continuing across the Liffey to various places including St Stephen’s Green, Countess Markievitz’s last stand, and Boland’s Mill, where Eamon de Valera was captured. First of two nights in Dublin.

Dublin. Visit Collins Barracks, built in 1702 and now a museum dedicated to Easter 1916. Here is the Asgard, which Erskine Childers used to smuggle guns from Germany, and a poignant cemetery. Kilmainham Gaol opened in 1796 and leaders of the rebellions of 1798, 1803, 1848, 1867 and 1916 were detained here. We see the extraordinary museum and Stonebreakers’ Yard where 14 Rebels were executed and the embers of The Troubles that beset the rest of the century were fanned.

South Armagh. Cross the Border (currently unmarked) near Newry. Now the tone of the tour changes as we are taken through the fabled ‘Bandit Country’. We’ll be shown where Thatcher’s new government was rocked by events at Warrenpoint, where Capt. Robert Nairac was abducted and won his George Cross, and the villages of Forkhill and Crossmaglen which still bear the marks of the twentieth century’s most protracted guerrilla campaign. The border was always lawless, and there are also sites of the conflict 1920–21. First of three nights in Belfast at the Europa Hotel, during the Troubles home of the press corps.

Derry-Londonderry, Omagh. (12th July: day of Protestant celebration of William of Orange’s victory at the Battle of the Boyne 1690.) Drive two hours through beautiful countryside to Derry-Londonderry, and explore Bogside and the Creggan Estate. Within sight of the Apprentice Boys’ defence of the city walls in 1690, the shocking events of January 30th 1972 – ‘Bloody Sunday’ – will be examined; the British Government stood on the brink of success until the disaster of that day gave the IRA what it needed to rejuvenate its campaign. Then a small village on the border where there are stories to be told, and Omagh, site of the deadliest but last of the Republican bombings.

Belfast. Start at Belfast Castle to view the city and its districts laid out below, then visit some of the most famous sites of confrontation: the so-called ‘peace-line’ which still divides the communities, Holy Cross School, the Ardoyne where the IRA split into its different factions, the Republican plot in Milltown Cemetery and the hardline Ballymurphy with its louring security forces’ base. Study also several of the famous murals, Loyalist and Republican.

Belfast. The tour is rounded off by a visit to the rarely seen Police Service of Northern Ireland’s Museum of The Troubles. The tour is over by 11.30am, which may allow you time to see more of Belfast before your flight.

Several airlines link Dublin and Belfast with many UK and other airports, so flights are not included in the tour. You are free to choose flights which are the most convenient for you.

Hotel accommodation; breakfasts, 2 lunches and 4 dinners with wine, water, coffee; travel by private coach; all admissions; all tips; the services of the lecturer and tour managerr.

Hotel Riu Plaza, The Gresham, Dublin: A historic 4-star hotel located on the famous O’Connell street in central Dublin. It has recently been fully refurbished. Europa Hotel, Belfast: a 1960s 12-storey tower of historical significance, recently refurbished, comfortable and with excellent service. Single rooms are doubles for sole use throughout.

The tour involves a lot of walking, where coach access is restricted, and a lot of standing at sites. A good level of fitness is essential. You will be on your feet for lengthy stretches of time. Rather more time is spent outside than indoors on this tour. Average distance by coach per day: 59 miles. 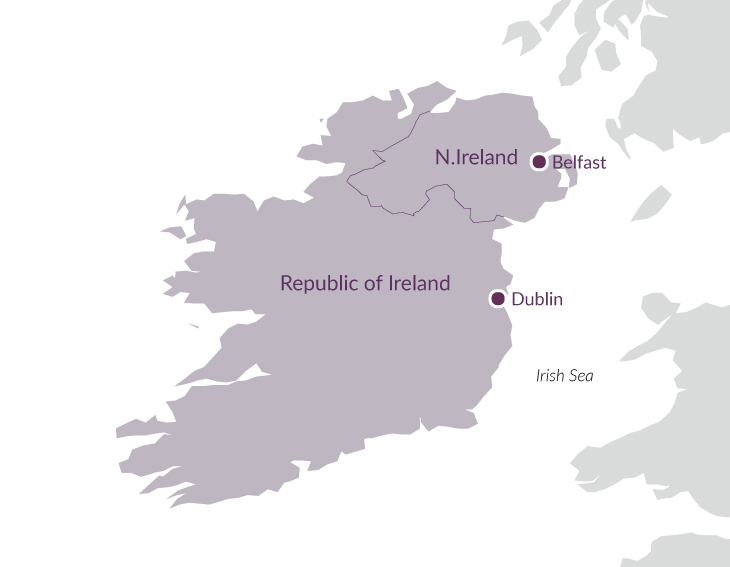 'Extraordinary opportunity. We heard firsthand accounts by participants and experienced and saw some of the continuous divisions in this fundamentally safe but fragile country.'

'It surpassed expectations – an adventure as well as informative.'