Amsterdam at Christmas - Art and architecture of the Dutch Golden Age

The loveliest capital in northern Europe, with visits to four other little cities – Haarlem, Delft, Leiden and The Hague.

Walks to enjoy the 17th-century canal-side mansions and other fine buildings.

Focus on painting of the Dutch Golden Age – Hals, Rembrandt, Vermeer & contemporaries – and art of other eras, notably Van Gogh.

Christmas Day concert at the Concertgebouw.

Settle on a swamp, dominate world trade for a hundred years, lapse into a 150-year recession and finally build up prosperity again over the next 150 years: the recipe for creating an extraordinarily beautiful and thriving city centre is, in retrospect, quite straightforward, if not often emulated (especially the first bit).

Originating about ad 1000 as a tiny community in the Rhine delta, Amsterdam’s population expanded massively during the seventeenth century, Holland’s Golden Age. The city fathers imposed a grand plan comprising four concentric canals lined with merchants’ mansions. Exulting in variety within homogeneity, these are up to seven storeys high, feature huge windows and are crowned with elaborate gables.

Exceedingly handsome, and quaintly picturesque: pine piles are not 100% reliable, and many a house has leans into its neighbour. Nevertheless, the survival rate is amazing for a modern capital; the majority of the building stock throughout the historic core is three to four hundred years old.

Complementing the beauty of the built environment are the arts of the period, in many media. Led by Frans Hals, Ter Borch, Rembrandt, Ruisdael, Van de Velde, Vermeer and innumerable other artists, the Dutch School is of universal appeal, with its mix of realism, painterliness, potency and poignancy. This tour visits all the major art galleries in Amsterdam and some of less visited ones, and includes outstanding collections elsewhere. Several have been transformed after a recent comprehensive refurbishments.

You also visit several temporary exhibitions including Rembrandt-Velázquez at the Rijksmuseum, Young Rembrandt at Leiden and Pieter de Hooch at Delft – the latter two in the artists’ birthplaces.

Haarlem, Amsterdam. Fly at c. 11.00am (British Airways) from London Heathrow to Schipol. Drive to Haarlem, the chief artistic centre in the northern Netherlands in the 16th century and home to the first of the great master of the Golden Age, Frans Hals. His finest works are in the excellent museum here, an inspiring start to the tour. Continue to Amsterdam, where all six nights are spent.

Amsterdam. Walk around parts of the western canals with their 17th-century merchants’ mansions. The City Hall (1655) magnificently expresses the power of the municipality at its height; it became a royal palace under Napoleonic rule. The house where Rembrandt lived and worked for nearly 20 years has been impeccably restored and has a display of etchings. Visit also the gothic Oude Kerk, the oldest building in the city, and Our Lord in the Attic, a secret Catholic church.

Amsterdam. A leisurely 30-minute walks through further canal-side streetscape prefaces a visit to the brilliantly refurbished Rijksmuseum, the principal gallery of the Netherlands. A tour concentrating on Golden Age art is followed by free time for independent exploration and lunch before timed tickets for the Rembrandt-Velázquez exhibition. Finally, the Museum Van Loon, a mansion with interiors of the 17th, 18th and 19th centuries.

Delft, The Hague. Drive to the delightful little town of Delft, home to Vermeer and Pieter de Hooch. Visit the exhibition devoted to de Hooch, master of the domestic interior. On to the seat of government, The Hague, to see the recently restored Mauritshuis, a princely residence with a smallish but superb collection of paintings including masterpieces by Rembrandt and Vermeer.

Amsterdam. Morning visits to the Portuguese Synagogue, a fine building of the 17th century, and to the Van Gogh Museum, the world’s largest holding of over 200 of the artist’s paintings, many from brother Theo’s collection. Lunch precedes an afternoon concert at the Concertgebouw with the Royal Symphony Orchestra.

Amsterdam. Another canalside walk takes us to the Museum Willet-Holthuysen, a well-furnished residence little changed since the 17th century. The Hermitage, an outpost of the St Petersburg institution, has changing exhibitions (not yet announced) and a long-term show of portraits of the Golden Age. Free afternoon; possible visits include the Stedelijk Museum (modern art), the Anne Frank House and the Science Centre.

Leiden, Amsterdam. The Museum De Lakenhal in Leiden reopens in 2019 after radical refurbishment. The exhibition Young Rembrandt draws together early works by the city’s most famous son. Fly from Amsterdam and return to London Heathrow at c. 4.30pm.

Hotel Estheréa: an excellently located 4-star hotel installed in a group of canal-side houses; decor throughout is colourful and quirky; room are comfortable if small (as is normal in Amsterdam); service good. Single rooms are doubles for sole use.

There is quite a lot of walking, and standing in museums, and the tour would not be suitable for anyone with difficulties with everyday walking. Average distance by coach per day: 20 miles. 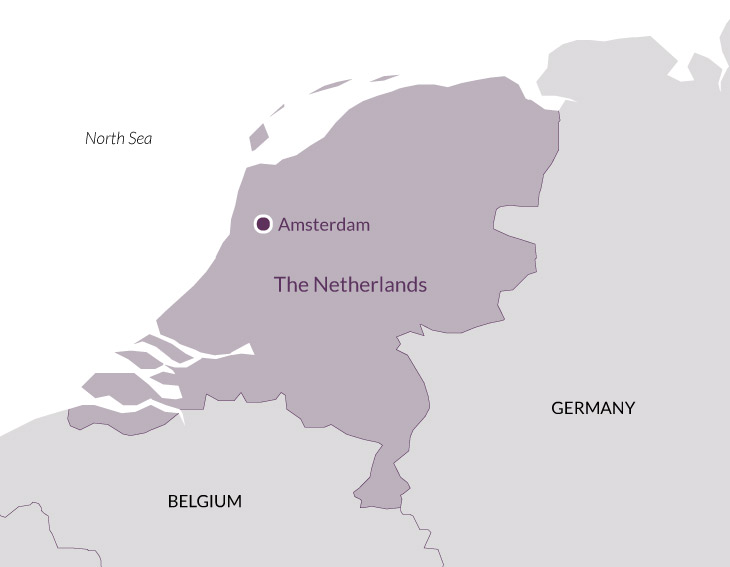