Art in the Netherlands - A spectrum of the finest

A study of Dutch art in some of the finest museums of the Netherlands.

The Rijksmuseum in Amsterdam, one of the world’s great museums, closed for major refurbishment for over ten years. It reopened in 2013, allowing us to offer comprehensive art history tours to the Netherlands once again. In the last few years the Van Gogh Museum and the Stedelijk Museum of Modern Art have also re-opened to great acclaim after periods of closure.

The seventeenth century was the Golden Age in the history and art history of the northern Netherlands. (Much of this activity was concentrated in Holland, though that was but one of seven provinces which constituted the United Provinces, now the Kingdom of the Netherlands.) This was the time of Frans Hals, Rembrandt, Vermeer and innumerable other great masters.

The Dutch School is of universal appeal, with its mix of realism, painterliness and potency, though it is best appreciated in the excellent art galleries of their native country – and against the background of the well preserved and wonderfully picturesque towns and cities. With their canals, cobbled alleys and gabled mansions, many have changed little in three hundred years.

There is also focus on Vincent Van Gogh, the bulk of whose output is in the Netherlands. Painters of the Hague School of the nineteenth century have a presence, as do pioneers of modernism in painting and architecture, the architects Van der Velde and Gerrit Rietveld for example, and the abstract painter Piet Mondriaan. More recent art and architecture also features.

The base for the tour is a five-star hotel in Utrecht, whose central location means relatively short journeys to all places visited.

Haarlem. Morning flight from London Heathrow to Amsterdam. Haarlem was the chief artistic centre in the northern Netherlands in the 16th century and home of the first of the great masters of the Golden Age, Frans Hals, whose finest works are in the excellent museum here. Drive to Utrecht, where all six nights are spent.

Amsterdam. With its rings of canals lined with merchants’ mansions, Amsterdam is one of the loveliest capitals in the world. Our visit to the brilliantly refurbished Rijksmuseum concentrates on the major works in its unrivalled collection of 17th-century paintings, Rembrandt’s Night Watch and four Vermeers among them. The house where Rembrandt lived and worked for nearly 20 years is well restored and has a display of prints. Also newly extended, the Van Gogh Museum houses the biggest holding (over 200) of the artist’s works, largely from his brother Theo’s collection.

Utrecht. One of the best-preserved historic cities in the Netherlands, Utrecht features canals flanked by unbroken stretches of Golden Age houses. The excellent art museum has a major collection of paintings of the 17th-century Utrecht School. See also the Rietveld House (1924), a landmark of 20th-century architecture.

Otterlo. Located in gardens and surrounded by an extensive heath, the beautiful Kröller-Müller Museum has the second great collection of works by Van Gogh as well as an eclectic holding of paintings, furniture and sculpture. A leisurely visit here allows time to explore the 75-acre park with its outdoor sculptures.

The Hague. The Mauritshuis at Den Haag contains a superb collection of paintings including masterpieces by Rembrandt and Vermeer. Exhibited in the Gemeentemuseum are 19th-century Hague School paintings, the realist milieu from which Van Gogh emerged, and works by the pioneer abstractionist Mondriaan. Visit also the illusionistic Mesdag panorama and the centre of the city, seat of the court and parliament.

Amsterdam. Return to Amsterdam. Visit the Hermitage Museum, which celebrates the historical ties between Amsterdam and St Petersburg. The afternoon is free for revisiting the Rijksmuseum (there is much to see other than the Golden Age paintings), the Van Gogh Museum, or the Stedelijk Museum of
Modern Art.

Leiden. The Museum De Lakenhal in Leiden reopened in 2019 after radical refurbishment. Originally built as the guildhall for cloth merchants, it houses works by Rembrandt. Drive to Rotterdam and take the Eurostar direct to London St Pancras arriving late afternoon.

We sometimes change the visits on this itinerary to take advantage of temporary exhibitions.

Rail travel (Standard Premier) on Eurostar; hotel accommodation; travel by private coach; breakfasts; 1 lunch and 4 dinners with wine, water and coffee; admission to museums and galleries; all tips; all taxes; the services of the lecturer.

The Grand Hotel Karel V, Utrecht: 5-star hotel converted from a 19th-century hospital in a quiet location within the city walls. Single rooms throughout are doubles for sole use.

There is quite a lot of walking and standing around, and the tour would not be suitable for anyone with difficulties with everyday walking and stair-climbing. Average distance by coach per day: 70 miles. 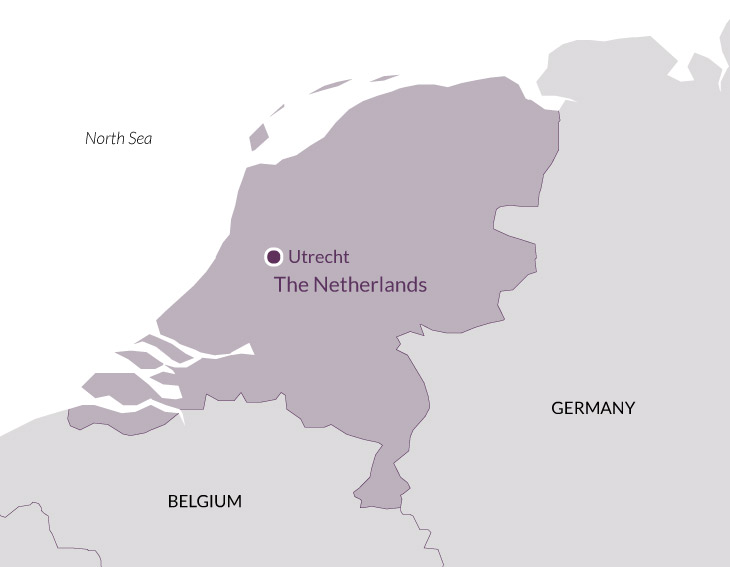 'This was a really marvellous week.'

'Wonderful! I was delighted to have the opportunity to visit and revisit so many towns in the Netherlands where art and architecture are sublime.'