Comprehensive overview of the country’s development from prehistory to the 20th century.

Beautiful and varied landscapes provide a striking backdrop to the journey.

A country still largely untouched by mass tourism but unlikely to stay that way for long.

Variety characterises this tour, which aims to cast light on a fascinating and little-explored region over a broad timespan. Humans first inhabited what is now Bulgaria around 40,000 years ago and there is much of archaeological importance to be seen, both in situ and in the country’s excellent museums.

Outside the Balkan peninsula, an air of mystery surrounds the region in the prehistoric and ancient periods. This was a time latterly dominated by the Thracians: an enigmatic people comprising cattle herders, farmers and warriors, with a love of wine and gold jewellery. Prehistoric burial sites scattered across the country illuminate their customs and culture and point towards one of the earliest hierarchical societies. We visit two such tombs – remote and stunningly preserved – with their artefacts displayed in collections across the country. Perhaps the most spectacular discovery in the region dates back, incredibly, to the fifth millennium bc. Recognised as the oldest gold treasure in the world, the ornaments housed in the archaeological museum in Varna on the Black Sea coast stimulated enormous international interest in 1972, yet many remain unaware of their existence.

The decline of the loose union of Thracian tribes under the Odrysian Kingdom (480 bc– ad 46 ushered in a gradual Romanisation of the area. Evidence of Thracia’s importance as a Roman kingdom is widespread in Bulgaria – particularly in Plovdiv (Philippopolis), one of the world’s oldest continuously inhabited cities, where the Roman forum and stadium vie for attention with Ottoman mosques and brightly-painted National Revival houses.

More recently, the country has emerged confidently from the post-communist haze: Plovdiv and the capital, Sofia, are lively, cosmopolitan centres with a plethora of bars, restaurants and shopping areas. Further afield, the former capital of Veliko Tarnovo and the ancient city of Nessebar hark back to an illustrious past.

Sofia. Fly at c. 8.00am (British Airways) from London Heathrow to Sofia. Transfer to the hotel for dinner. First of two nights in Sofia.

Sofia. The day begins with the first of a series of lectures. The church of St Sofia, from which the city takes its name, is an outstanding example of Early Christian architecture. The vast Alexander Nevsky Cathedral, built 1882–1912, follows this architectural tradition. The well-preserved remains of the Roman city (Serdica) are entwined with the subway system under the shadow of the former Communist Party headquarters. Break for lunch before visiting the archaeological museum, an impressive collection including Thracian treasure housed in the city’s oldest and largest former Ottoman mosque. Visit Boyana Church with its incredible 13th-century frescoes.

Rila monastery, Plovdiv. Drive south into the scenic Rila mountains to the eponymous monastery. Built on the site of its medieval predecessor, which was destroyed by fire, Rila is a spectacular example of Bulgarian National Revival architecture and a unesco world heritage site. Lunch near Rila before journeying through forest, mountains and across plains to Plovdiv. First of three nights in Plovdiv.

Plovdiv. Walking tour of the remains of ancient Philippopolis: the forum, stadium and the amphitheatre, which ranks among the best-preserved ancient theatres in the world, with the Rhodope mountains as its dramatic backdrop. After lunch walk through the National Revival quarter. Brightly painted and highly decorative, the architecture reflects the ambition of the emerging middle class which flourished in the early 1800s after liberation from Ottoman rule. There is time to visit the archaeological museum.

Kazanlak. Leave Plovdiv for Kazanlak in the so-called Valley of the Thracian Kings, a region where more than a thousand tombs have been unearthed. Visit one of the most elaborate: the Tomb of Seuthes III, fourth-century bc ruler of the Odrysian Kingdom, whose bronze head is displayed in Sofia’s archaeological museum. The Thracian Tomb of Kazanlak with its painted ceiling is considered one of the masterpieces of the Hellenistic period in Bulgaria. Visit the full-size replica (to preserve the paintings, the tomb is not open to the public).

Nessebar, Varna. Travel to the Black Sea coast and the ancient city of Nessebar. Situated on a rocky peninsula, the city is described by unesco as ‘an outstanding testimony of multilayered cultural and historical heritage.’ Many civilisations left their mark on the city, with archaeological structures from the second millennium bc to the Middle Ages. Continue to Varna, where two nights are spent.

Varna. Bulgaria’s third city has been one of the Black Sea’s major ports for over 2,000 years and was an important Roman and Byzantine staging post. Visit the archaeological museum with its glorious collection of gold jewellery from the nearby necropolis dating back to the fifth millennium bc. In the afternoon visit the largest Roman remains in the country: the thermae of Odessus, a sizeable complex with a brick tower built in the middle of the second century.

Madara, Sveshtari, Arbanassi. The Madara Rider is a unique relief carved into a 100m-high cliff, created during the early years of the formation of the First Bulgarian Empire, at the beginning of the eighth century. After lunch, drive to the remote village of Sveshtari where a third-century bc tomb was discovered in 1982. Ten female figures carved in high relief on the walls of the central chamber are the only examples of their kind found so far in the Thracian lands. Continue to the charming village of Arbanassi for the first of two nights.

Arbanassi, Veliko Tarnovo. A walking tour of the village includes a traditional house and the Church of the Nativity with richly coloured 17th-century frescoes. Drive a short distance to the former capital of Veliko Tarnovo and visit Tsaravets fortress, used in the Second Bulgarian Empire from 1185 to 1393. Razed to the ground by the Ottomans in the 14th century, rebuilding began in the 1930s. Its hilltop location provides a wonderful vantage point from which to survey the Old Town. Lunch here before a guided walk through the narrow streets.

Visit Nicopolis ad Istrum, the ruins of a Roman and Early Byzantine town, before lunch in Sevlievo. Drive to Sofia and the National History Museum, in the former primary residence of the dictator and last communist leader, Todor Zhivkov. Fly to London Heathrow, arriving at c. 7.00pm.

Flights (Euro Traveller) with British Airways (Airbus 320); travel by private coach; hotel accommodation as described below; breakfasts; 9 lunches and 8 dinners with wine, water, coffee; all admissions; all tips; all taxes; the services of the lecturer and tour manager..

The tour involves a lot of walking in town centres, where coach access is restricted, and a lot of standing in museums and churches. Uneven ground and irregular paving are standard. A good level of fitness is essential. You will be on your feet for lengthy stretches of time. There are some long coach journeys. Average distance by coach per day: 95 miles. 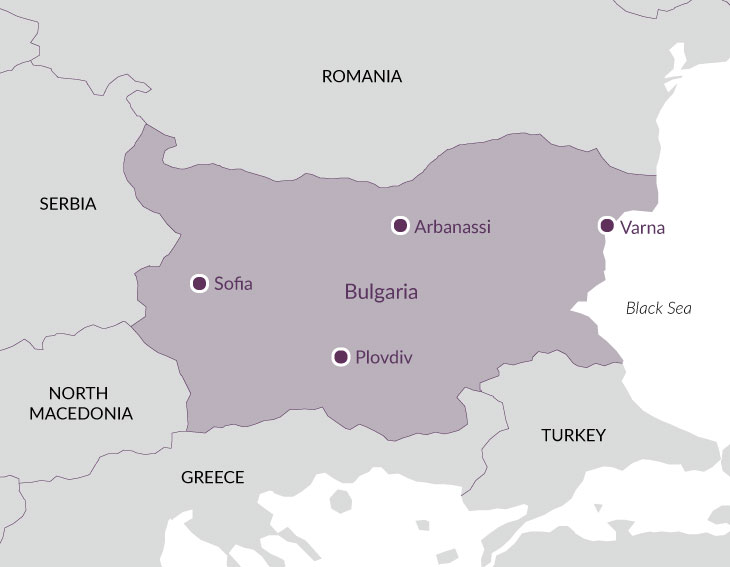