The Duchy of Urbino - The Renaissance in the Marches

Trawls through the little-visited hills and valleys of the Marches, and along its coast.

Some world-class items, but for the most part the pleasures of this tour arise from the lesser treasures in remote and unspoilt communities in a kaleidoscope of breathtaking scenery.

Led by Dr Thomas-Leo True, expert art historian specialising in Renaissance and Baroque architecture of the Papal States, and former resident of the Marches.

By inheritance lord of a marginal patch of mountainous territory, by profession a mercenary soldier, by scale of expenditure the most important Maecenas of his day: Federico da Montefeltro, Duke of Urbino, was one of the most fascinating and influential characters of Renaissance Italy.

His palace at Urbino is the finest Early Renaissance courtly residence in existence, a sequence of interiors of serene beauty. He was also the paymaster for many other buildings, civil and military, throughout the duchy. Even more important for the subsequent history of civilization than the architecture was what took place within these buildings, for his court attracted humanists, artists and young noblemen from all over Italy and beyond. Two examples: Raphael spent his first twelve years here (his father was court painter), and for centuries the manners and demeanour in the upper echelons of European society were under the influence of Urbino court life as described by Baldassare Castiglione in The Courtier.

The Duchy of Urbino is located in the north of Le Marche, the Italian Marches, the name deriving from its tenth-century status as the borderlands between the Ottonian empire to the north and the papal lands to the south. Remoteness from the centre led to the emergence of local warlords, territorial fragmentation and de facto independence. The Buonconte dynasty had controlled Montefeltro for two hundred years before Federico II succeeded in 1444 at the age of 22. During his 38-year tenure he expanded his domains at the expense of his Malatesta and Sforza neighbours, but the source of his fortune was his generalship of the armies of the great powers of Italy, the Duchy of Milan, the Republic of Venice and the Kingdom of Naples, switching sides without scruple, and accepting tribute from lesser powers just to stay away. He was made a duke by the pope in 1474.

His son Guidobaldo and his Delle Rovere successors continued artistic patronage though on a much reduced scale. Stagnation set in after the duchy reverted to the Church in 1631.

One recurrent feature of this tour is military architecture, castles and city walls of huge variety and sometimes extraordinary beauty. There are also many fine paintings, in galleries and original settings.

San Leo. Fly at c. 8.30am (British Airways) from London Heathrow to Bologna. Drive along the Via Emilia and turn into the hills marking the northern border of the Duchy of Urbino and constituting the Montefeltro heart lands, guarded by the famously impregnable castle of San Leo. Introductory walk in this tiny mountain town, which has a marvellously unspoilt Romanesque church and, atop a limestone cliff, one of the most dramatically sited castles in all Europe. Overnight San Leo.

Sassocorvaro, Urbino. Mountain drives lead to the castle of Sassocorvaro and another staggeringly beautiful hill road climbs to Urbino, Duke Federico’s principal residence and one of Italy’s loveliest hilltop towns. An afternoon walk takes in the outstanding International Gothic frescoes by the Salimbeni brothers, cathedral and Diocesan Museum. First of five nights in Urbino.

Mondavio, Senigallia, Fano. Two of the most extraordinary and beautiful examples of Renaissance fortifications are seen today: the multifaceted brick castle at Mondavio and, in the coastal town of Senigallia, the sedate quadrangular fort and palace within. Also in Senigallia are a Neoclassical market place and arcaded waterfront. In Fano see an altarpiece by Perugino.

Sant’Angelo in Vado, Mercatello sul Metauro, Urbania. Drop down to the Metauro river and follow the valley to the foothills of the Apennines. The small towns of Mercatello sul Metauro and Sant’Angelo in Vado retain well preserved mediaeval and Renaissance centres and paintings from the 13th to 17th centuries. Urbania is a charming town with a fortified palace built for Federico and modified for the last Duke of Urbino, whose tomb is in the town.

Urbino. Unravel the building history and examine the interior of the finest Renaissance palace in Italy, built over half a century from the 1450s for the dukes of Urbino, with the loveliest of all arcaded courtyards, serene halls of state, beautifully carved ornament and exquisite study. The art collection includes paintings by Piero della Francesca, Raphael and Titian.

Gubbio is one of the most beautiful hill towns in Umbria, with a hillside piazza overlooking the lower town, formidable mediaeval palaces and the Ducal Palace, best-preserved of Federico da Montefeltro’s residences outside Urbino.

Pesaro. A prosperous port and centre of ceramic production, Pesaro was won successively by the Malatesta, Sforza and Delle Rovere dynasties before returning to papal rule in 1631. The art gallery contains Bellini’s great Coronation of the Virgin, perhaps his masterpiece. Fly from Bologna, arriving London Heathrow at c. 8.20pm.

Flights (Euro Traveller) with British Airways (Airbus A319); travel by private coach for airport transfers and excursions; hotel accommodation; breakfasts, 1 lunch, 4 dinners with wine, water, coffee; all admissions; all tips; all taxes; the services of the lecturer and tour manager.

Hotel Castello, San Leo: a small 2-star hotel, simple but adequately comfortable, the lack of luxury more than compensated for by its location in the heart of this beautiful hill village. Hotel San Domenico, Urbino: a 4-star hotel converted from a monastery building and the best to be found right in the centre of the city, opposite the ducal palace.

There is a lot of walking, much of it uphill and on rough-hewn cobbles. There is also quite a lot of driving along minor hill roads. Average distance by coach per day: 63 miles 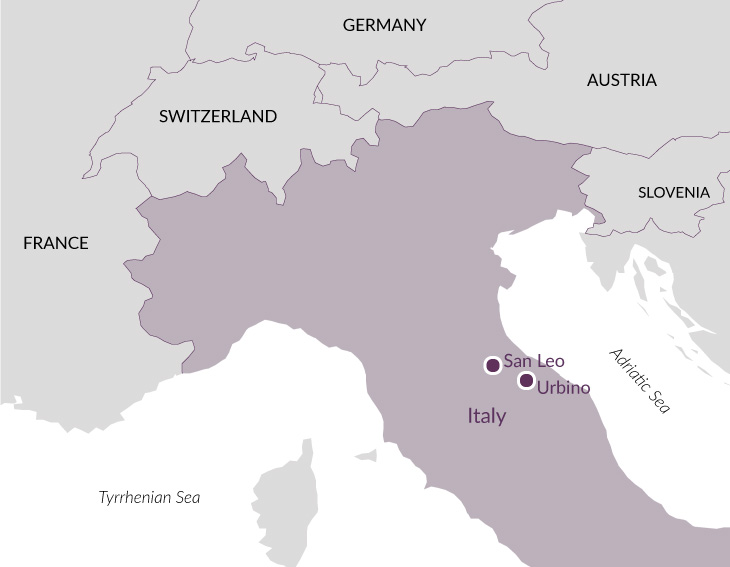 'Our lecturer was excellent on all counts.'

'Comprehensive and well chosen. We saw more palaces, forts and great art than might be expected in a relatively short tour.'

'Thank you for the magnificent experience.'