The cradle of Gothic, northern Europe’s most significant contribution to world architecture.

Nearly all the most important buildings in the development of Early and High Gothic, with an entire day at Chartres.

Gothic was the only architectural style which had its origins in northern Europe. It was in the north of France that the first Gothic buildings arose, it was here that the style attained its classic maturity, and it is here that its greatest manifestations still stand.

From the middle of the 12th century the region was the scene of unparalleled building activity, with dozens of cathedrals, churches and abbeys under construction. Architects stretched their imaginations and masons extended their skills to devise more daring ways of enclosing greater volumes of space, with increasingly slender structural supports, and larger areas of window.

But Gothic is not only an architectural phenomenon. Windows were filled with brilliant coloured glass. Sculpture, more life-like than for nearly a thousand years yet increasingly integrated with its architectural setting, was abundant. The art of metalwork thrived, and paint was everywhere. All the arts were coordinated to interpret and present elaborate theological programmes to congregations which included both the illiterate lay people and sophisticated clerics.

Nearly all the most important buildings in the development of the Early and High phases of Gothic are included, and the order of visits even follows this development chronologically, as far as geography allows. A whole day is dedicated to the cathedral at Chartres, the premier site of the building arts of the medieval world.

Travel by Eurostar at c. 1.00pm from St Pancras to Lille. Continue by coach to Laon and the hotel, in an attractive lakeside setting. First of three nights near Laon.

Noyon, Laon. One of the earliest Gothic cathedrals (c. 1150), Noyon’s four-storey internal elevation marks the transition from the thick-walled architecture of the Romanesque to the thin-walled verticality of Gothic. Laon is spectacularly sited on a rock outcrop. Begun c. 1160, the cathedral is the most complete of Early-Gothic churches and one of the most impressive, with five soaring towers.

Soissons, Reims. Soissons Cathedral is a fine example of the rapid changes which took place in architecture at the end of the 12th century. Reims Cathedral, the coronation church of the French monarchy, begun 1211, is a landmark in the development of High Gothic with the first appearance of bar tracery and classicising portal sculpture. At the church of St Rémi the heavy Romanesque nave contrasts with the light Early-Gothic choir.

St-Denis. On the outskirts of Paris, the burial place of French kings, St-Denis was an abbey of the highest significance in politics and in the history of architecture. In the 1140s the choir was rebuilt, and the pointed arches, rib vaulting and skeletal structure warrant the claim that this was the first Gothic building. 100 years later the new nave inaugurated the Rayonnant style of Gothic with windows occupying the maximum possible area. First of two nights in Chartres.

Chartres. The cathedral at Chartres, begun in 1145 and recommenced in 1195 after a fire, is the finest synthesis of Gothic art and architecture. Sculpture and stained glass are incorporated into an elaborate theological programme. A full day here provides time for unhurried exploration of the building and space to reflect and absorb. See also the church of St Pierre.

Mantes-la-Jolie, Beauvais, Amiens. Visit the 12th-century collegiate church at Mantes-la-Jolie. Beauvais Cathedral, begun 1225, was, with a vault height in the choir of 157 feet, the climax in France of upwardly aspiring Gothic architecture and the highest vault of medieval Europe. Overnight Amiens.

Amiens. The cathedral in Amiens is the classic High-Gothic structure, its thrilling verticality balanced by measured horizontal movement. Drive to Lille for the Eurostar to London St Pancras, arriving c. 7.15pm.

Train travel by Eurostar (Standard Premier); coach travel; hotel accommodation; breakfasts and 5 dinners with wine, water, coffee; all admissions; all tips; all taxes; the services of the lecturer and tour manager.

Hôtel du Golf de l’Ailette, Chamouille: a comfortable 4-star located a short drive from Laon in an attractive position by a lake. Hotel Le Grand Monarque, Chartres: a centrally located 4-star hotel. Hotel Mercure Amiens: a modern 3-star hotel near to the cathedral. Single rooms are doubles for sole use throughout.

There is a fair amount of walking and standing around, as well as some long coach journeys. You should be able to lift your luggage on and off the train and wheel it within the station. Average distance by coach per day: 89 miles. 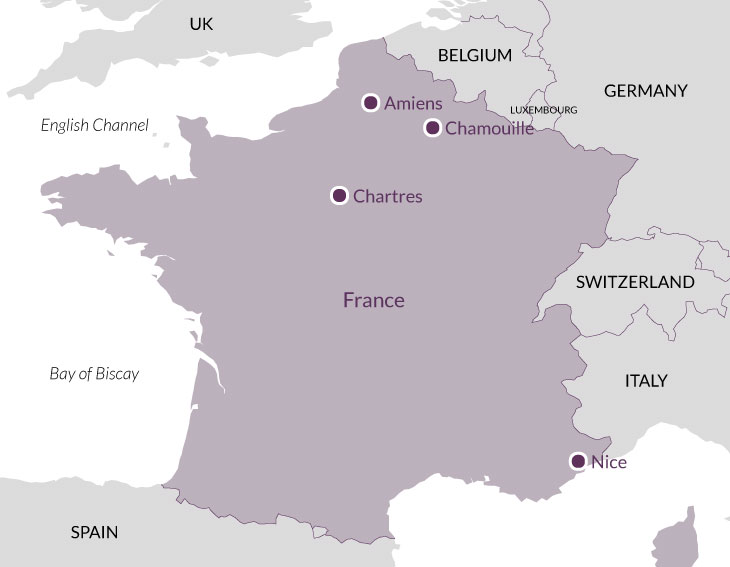 'Very well devised - just the right amount of time wherever we went.'

'The lecturer's infectious enthusiasm and deep knowledge was a wonderful combination.'

'Excellent holiday. I would choose MRT over rival competitors because of their attention to detail.'

'The lecturer was very knowledgeable, engaging manner, communicated a complex subject very clearly. We shall look out for her future tours.'

'I enjoyed every minute. I was pleased that there was time to also explore some of the delightful towns we visited as well as being truly in awe of those wonderful churches and cathedrals the lecturer led us through. It was very well planned and we covered so much during that memorable week.'

'The lecturer's orientation notes and thorough coverage of features at each major cathedral revealed the key stages, influences and cultural context of this radical new approach to church architecture. It was a stimulating learning experience.'