A selection from one of the densest collections of country houses and town palaces in Europe.

Prosperous and progressive for most of their history, Bohemia and Moravia were favoured territories for aristocratic estates.

Renaissance houses and decoration of the 16th century are a particular delight, Baroque is brilliantly represented, Neo-Classical and Gothic Revival not far behind.

Can be combined with Music Along the Danube, 31 August–7 September 2019.

With an exceptional density of great houses, the Czech Republic, comprising the historic provinces of Bohemia and Moravia, is an essential destination for anyone who cares for country houses and town palaces. With variety also being as much a feature as profusion, visitors are invariably surprised and delighted by the riches that are to be seen in the relatively undiscovered countryside beyond Prague.

The Middle Ages had an impact on the appearance of some of the houses where incorporation of the masonry of a castellar predecessor affected the present plan or appearance. Reception of Italian Renaissance architecture was precocious, and there are arcaded courtyards of an elegance and scale which are unparalleled elsewhere in Europe. There is also some outstanding decoration of the sixteenth century.

Around the turn of the seventeenth and eighteenth centuries, a period of renewal after a time of troubles, there was a veritable mania for building. Houses in rumbustious Baroque styles arose, sometimes sophisticated, often provincial, usually delightful, always impressive. The Age of Neo-Classicism is also handsomely represented. Many parks and gardens succumbed at this time to the fashion for the English landscaped style. Also partly of British inspiration was the Gothic Revival, and the nineteenth century produced a large number of mansions shaped by the spirit of Romanticism.

Nearly all the houses retain first-rate furnishings and works of art. On the whole state custodianship has been adequately caring, but since the collapse of Communism a number of properties have been returned to their pre-1948 owners. Every year there are improvements to be seen as growing prosperity allows for restoration and more enlightened curatorship.

Natural beauty is also a feature of the tour, with ravishing countryside and a deep rurality which has vanished from much of the rest of Europe.

Prague. Fly at c. 10.00am from London Heathrow to Prague and drive to Mělník. Situated on a bluff above the River Vltava and surrounded by vineyards, Zámek Mělník is a charming country house of several periods. The rooms with unrestored 18th-century decoration are outstanding. First of two nights at a country house hotel near Liblice.

Veltrusy, Nelahozeves. Veltrusy is a delightful 18th-century house on an unusual X–plan. Chinoiserie interiors, and one of the Continent’s earliest ‘English’ landscaped parks.The formidable and apparently defensible bulk of Nelahozeves melts in the courtyard into a graceful Italianate dwelling with classical arcades, revealing itself as one of the first monumental Renaissance buildings in the region. A property of the Lobkowitz family, there is a fine collection of pictures and furniture. Overnight Liblice.

Chlumec, Kačina. Karlova Koruna (‘Charles’s Crown’) at Chlumec nad Cidlinou is a fascinating design by the brilliant if eccentric Baroque architect Santini-Aichel. It was built for the the Kinsky family, to which it was restituted after the collapse of the communist regime. Dating to the early 19th century, Kačina is a fine synthesis of English Palladianism and Continental Neo-Classicism. Fine rooms, remarkable cylindrical library, landscaped park. First of three nights in Brno.

Valtice, Lednice. Adjoining the Austrian border are two great houses which were the property of the Liechtenstein family from the 13th century to 1945. The redoubtable residence at Valtice is largely of the 17th and 18th centuries, while the house at Lednice is a magnificent Gothic Revival building with outstanding woodwork interiors. Here also are monumental Baroque stables designed by Fischer von Erlach and an extensive park with large-scale follies and pavilions. Overnight Brno.

Bučovice, Kroměříž. Bučovice is a Renaissance treasure, with a splendid triple-tiered arcaded courtyard and stucco interiors of a quality virtually without equal in northern Europe. Kroměříž is a lovely small town which was an episcopal seat. The Bishop’s Palace has a magnificent Rococo hall and other fine rooms as well as an outstanding art collection (Titian’s The Flaying of Marsyas). The 17th-century walled garden with pavilion and immense colonnade is an astounding survival. Overnight Brno.

Vranov, Jaroměřice. The great house at Vranov, perched above a ravine, was transformed in the 1690s by Fischer von Erlach, greatest of 18th-century Austrian architects. The oval Hall of Ancestors, with frescoes by Johann Rottmayr and views across hills, is one of the finest creations of the Baroque Age. Vast and rambling, the Baroque palace at Jaroměřice nad Rokytnou has some delightful untouched 18th-century interiors, an enormous chapel and fine gardens. Overnight Telč.

Telč, Jindřichův Hradec. The tiny town of Telč has the loveliest square in Central Europe. The aristocratic residence was rebuilt in phases in the 16th century with arcaded courtyards and a series of halls with richly carved ceilings and decoration which verge on the bizarre. More Renaissance arcades follow at the castle at Jindřichův Hradec; we limit our visit to the interiors of the beautiful garden rotonda. Drive to Hluboká nad Vltavou, our base for two nights. Its white tower visible from afar, Hluboká had mediaeval and Baroque incarnations before the lavish Gothic Revival refurbishment inspired by visits to Britain. Splendid carved wood interiors and a profusion of furniture and works of art.

Český Krumlov, Kratochvíle. Built up around a bend in the River Vltava, Český Krumlov is an exceedingly picturesque and well-preserved town. The castle looms above –mediaeval in origin, in large part 16th-century, endowed in the 18th century with a hall painted with scenes of a masked ball and a theatre which has survived fully equipped with scenery and costumes. Secluded within a walled garden amid particularly lovely countryside, Kratochvíle is the finest Renaissance villa in the country. Overnight Hluboká.

Hluboká. Drive to Prague for the flight to London, arriving Heathrow c. 2.50pm.

Participants combining this tour with Music Along the Danube (31 August–7 September) are transferred privately to Passau where the ship is moored. The journey takes around two hours.

Some of the places on this itinerary require special permission to visit. The order may therefore vary a little from the description above.

Air travel (economy class) on scheduled British Airways flights (Airbus A320); travel by private coach; accommodation as described below; breakfasts, 6 lunches and 6 dinners with wine; admission charges; tips for waiters, drivers and guides; all airport and state taxes; the services of the lecturer and local guide/interpreter.

Hotel Château Liblice, Liblice: 4-star hotel and conference centre converted from an 18th-century country house. Grandezza Hotel, Brno: a newly opened luxury boutique hotel, located in the heart of Brno’s historic centre Green Market. Hotel U Hraběnky, Telč: the only usable hotel for many miles around, this 4-star hotel is fairly old-fashioned, if adequately equipped. Hotel Stekl, Hluboká nad Vltavou: a 4-star hotel converted from an auxiliary building belonging to the neighbouring mansion. Single rooms are doubles for sole use throughout.

There is quite a lot of walking on this tour, some of it up slopes or up steps. To be able to enjoy the tour it would be essential to manage daily walking and stair-climbing without any difficulties. There is also a fair amout of driving. Average distance by coach per day: 87 miles. 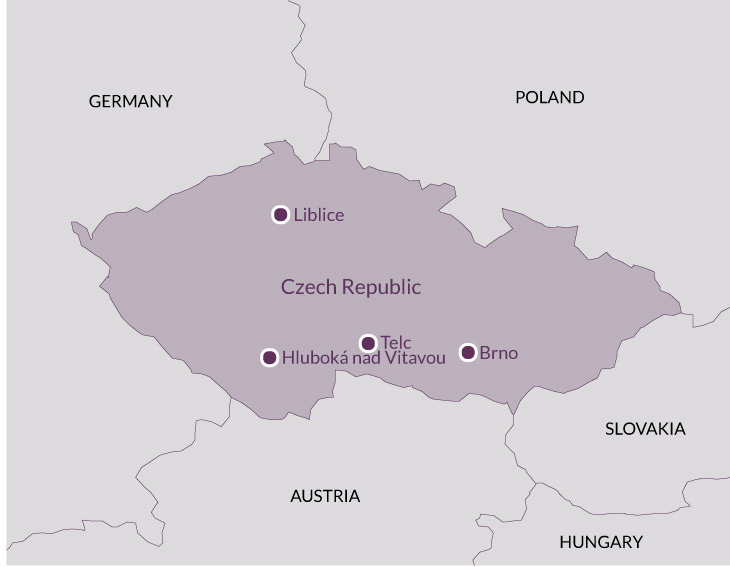