Some of Italy’s finest collections of musical instruments, some in private properties and viewed only by special arrangement.

Based in Milan and Cremona, with some free time to explore these historic cities, and excursions to Briosco and Bologna.

Recitals on period instruments and the opportunity to meet the collectors.

An instrument is the sole and precious witness to music that was performed in the past. Many years after the musicians and the sounds they produced have disappeared, a few rare instruments remain, in museums and private collections. Thanks to their preservation, we can today hear appropriate music played with more colourful timbres and more authentic performance styles, and better understand the stylistic choices made by composers.

This tour brings musical history to life by visiting some of the most influential centres of instrument making. No city can surpass Cremona for its tradition of bowed strings, dating to the early 16th century when the mellifluous tone of the Amati family’s instruments transformed the violin from a folk instrument to one capable of expressing the noblest musical sentiments. Nicolò Amati probably taught both Antonio Stradivari and Andrea Guarneri, whose instruments have become legendary and whose tradition is continued today among Cremonese luthiers.

Milan was the centre of the violin family’s early development, but both Milan and Bologna were also famous for their lutes. And Bologna was renowned for the quality of its wind instruments as early as the 13th century; the ensemble of cornets and sackbuts at the church of San Petronio was admired throughout Italy.

Northern Italy is home to some of Europe’s most important collections of historic instruments, many of which are in playable condition, making it possible to explore the evolution of the principal instrumental families – keyboards (harpsichords, clavichords, organs and pianos), bowed and plucked strings, woodwind and brass.

Milan. Fly at c. 10.30am (British Airways) from London Heathrow to Milan. Visit the Musical Instruments Museum at the Castello Sforzesco, which has a vast collection of over 800 instruments, including a rare double virginal by Ruckers (Antwerp c. 1600), numerous examples from the Lombard lute and viol tradition and many African and Asian instruments. In the evening, visit a collection in a private palazzo where there is a harpsichord recital and dinner. First of two nights in Milan.

Milan, Briosco. Drive to Briosco to visit Villa Medici-Giulini, a 17th-century stately residence which houses one of the most important private collections of European keyboard instruments and harps, many
of which have been restored to playable condition. There are demonstrations and performances on the instruments, followed by lunch in the villa. There is some free time in Milan in the afternoon.

Cremona. This glorious town in the Po Valley was home to the Stradivari, Amati and other families of luthiers whose stringed instruments have been the world’s best for more than 300 years. Learn about the violin in situ at the Museo del Violino (with a performance on a historic violin), and visit a violin-maker’s workshop. Cremona has a splendid central square formed of cathedral, campanile (Italy’s tallest), baptistry and civic palaces, and there is some free time to explore these. Overnight in Cremona.

Bologna. Continue to Bologna. The Museo della Musica houses a rich collection of scores, portraits and instruments. The private collection of the late-Bolognese scholar Luigi Ferdinando Tagliavini, long-admired by specialists, has recently been made available to the public. It is housed in one of Bologna’s oldest churches and traces the history of keyboard instruments from the 16th to the 19th centuries. Fly from Bologna to London Heathrow, arriving c. 8.00pm.

If you are joining Venice: Pageantry & Piety, travel independently by rail (first class) from Bologna to Venice and transfer to your festival hotel (you will need to elect to arrive a day early). At the end of the festival, return to London of festival flight option 1.

Flights (Euro Traveller) with British Airways (Airbus 320); travel by private coach; hotel accommodation as described below; breakfasts; 1 lunch and 3 dinners with wine, water and coffee; all admissions; all tips for restaurant staff and drivers; all taxes; the services of the lecturer and tour manager.

If combining this tour with ‘Venice: Pageantry & Piety', we charge you the ‘with flights’ price for this tour and the ‘without flights’ price for the festival. Supplementary cost for the train from Bologna to Venice and transfer to the hotel: £95 per person (you will also need to add the price of arriving a day early in Venice).

There is inevitably quite a lot of walking and standing in museums on this tour. Some of the walking is uphill or over cobbles. The coach cannot be used within the town centres. Average distance by coach per day: 53 miles. 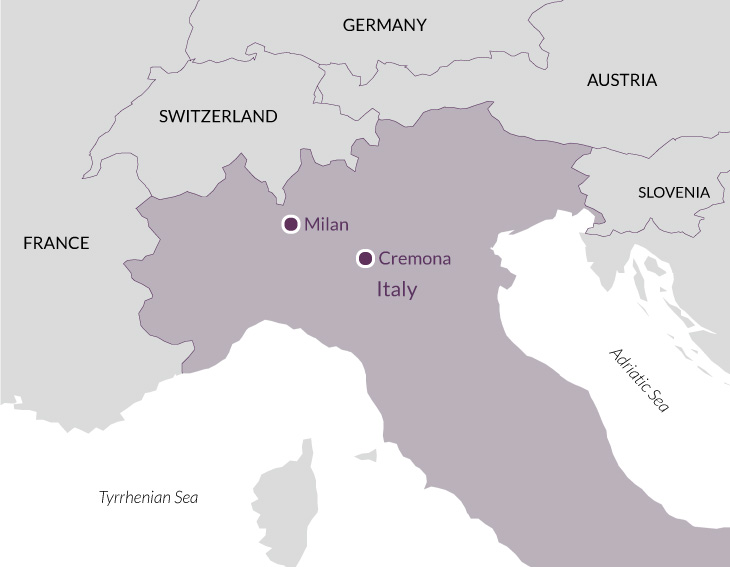