Art & Medicine - Florence, Bologna and Padua in the Age of Humanism

Historic anatomical theatres, including the earliest in the world, some of the best scientific museums in Italy, and an exploration of the anatomical studies of Leonardo and Michelangelo.

This unique tour is jointly led by a leading professor of classical medicine and an expert art historian.

It is almost impossible to over-emphasise the leading role that Italy played in creating the civilization of the modern world.

Developments in the arts of painting, sculpture and architecture during the Italian Renaissance came to dominate the art of the western world until the beginning of the last century. Humanism, a range of intellectual endeavour which built on the achievements of the classical world, matured into the critical, liberal attitude which underlies current modes of thought and ideas about education. From patisserie to opera, boarding schools to astronomy, in countless areas of human endeavour and intellectual achievement a seminal Italian input can be traced.

In no field is the contribution of Italy greater than in the science of medicine. Bologna and Padua are homes to the oldest universities in Italy – indeed, in Europe – and their medical schools have for centuries made important contributions to the study of anatomy and the practice of surgery. Florence also has a good range of historical medical institutions, as well as the finest artistic patrimony of any city in the world.

Florence. Fly at c. 8.45am (British Airways) from London Heathrow to Pisa. Visit the Museo Galileo, which covers scientific studies from the Medici right through to current theory. First of three nights in Florence.

Pisa. In the High Middle Ages Pisa was one of the most powerful maritime city-states in the Mediterranean, the rival of Venice and Genoa, deriving great wealth from its trade with the Levant. The Campo dei Miracoli is a magnificent Romanesque ensemble of cathedral, monumental burial ground, campanile (‘Leaning Tower’) and baptistery. The Campo Santo, for centuries the burial place of the Pisan upper classes, was built using earth brought back from Golgotha during the crusades and has frescoes depicting death.

Florence. See the Ospedale degli Innocenti, a children’s orphanage designed by Brunelleschi, and Michelangelo’s David in the Accademia. Visit also the Casa Buonarroti, house of Michelangelo’s family, which has models revealing his unprecedented knowledge of anatomy. Leave Florence for Bologna, where the following three nights are spent.

Bologna. The Archiginnasio has an 18th-century anatomical theatre and écorché figures by Lelli. At the oldest university in Italy visit the Museo di Palazzo Poggi, which has sections devoted to obstetrics and anatomical waxworks. In the afternoon visit the Basilica di San Domenico, with the tomb of St Dominic, and the late-Baroque church of Santa Maria della Vita.

Padua. A full-day excursion to Padua, an important university city where Galileo once lectured. In the university itself, items include Galileo’s chair, William Harvey’s emblem and, above all, the 16th-century anatomical theatre, the oldest in the world. Visit the new Museum of the History of Medicine, which uses interactive displays. See also Giotto’s fresco cycle in the Arena chapel, one of the landmarks in the history of art.

Fly from Bologna to London Heathrow, arriving at c. 2.00pm.

There is a lot of walking on this tour and it would not be suitable for anyone who has difficulties with everyday walking or stair-climbing. Average distance by coach per day: 57 miles. 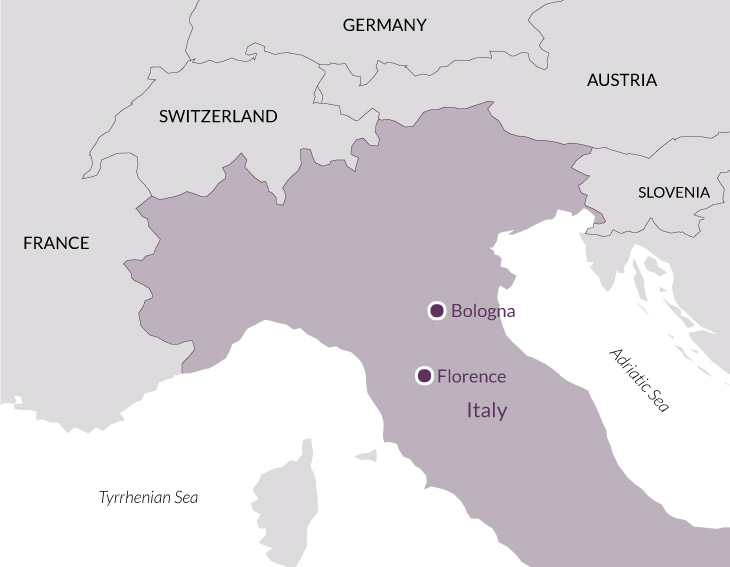 'The lecturer was superb; extremely knowledgeable.'

'It was a great privilege to have two such excellent lecturers. They complemented each other and it was a joy to listen to them.'