Wrocław and Kraków, two of the most impressive and fascinating historic cities in Central Europe.

Passed between Bohemia, Prussia and Poland, the multi-layered region of Silesia is of outstanding interest, historically and architecturally.

Wrocław is the capital of Silesia, in the early modern period one of the wealthiest regions of Central Europe. Prosperity has returned to Wrocław (it has the fastest growing economy of any Polish city), but otherwise contrasts outweigh similarities with Kraków. The mediaeval origins of Silesia were Polish, but under Bohemian, Austrian and Prussian rule, and as an integral part of a united Germany until 1945, German culture came to dominate (Wrocław was known as Breslau). When Silesia was added to Poland after World War II the German-speaking population was replaced by Polish settlers – many of them displaced from territory lost in the east. There ensued ambivalence about its status: much was made of Wrocław’s Polish origins, but a veil was drawn over its later history.

It is only since the end of Communism that Wrocław has really come to terms with its multi-layered past and the glories of its artistic heritage, now painstakingly restored: the imposing Gothic churches, magnificent Baroque sculpture and pioneering modernist architecture. The impressive old town centre is one of the grandest in Central Europe – evidence of the city’s status as a great metropolis in the fifteenth and sixteenth centuries. It was to remain an important place of cultural interchange between the German west and the Slavic east, and between the Protestant north and the Catholic south.

Kraków is one of the treasures of Europe, an unspoilt cityscape of the highest architectural importance. Famed for its royal castle, university, great churches and art collections, it was for centuries Poland’s capital, at a time when the country was one of the major kingdoms of Europe. After the dismemberment of Poland at the end of the eighteenth century, the city was subsumed within the Austrian Habsburg Empire and reduced to provincial impotence.

Its independent spirit and intellectual life continued undimmed, however. After the revival of Poland as an independent nation in 1918, and during the tribulations it sustained during much of the twentieth century, Kraków acquired the status of cultural capital, and its literary and artistic life continues to thrive. Miraculously, it largely escaped war-time destruction, but its fabric suffered neglect under Communism. In recent years it has undergone another transformation, restored, cleaned, and once again prosperous.  Cafés, shops, restaurants and enterprises of all sorts now fill the historic centre, and it has become a popular city-break destination.

London to Wrocław. Fly at c. 10.00am from London Heathrow to Kraków (British Airways). Drive to Wrocław and settle in at the hotel before an introductory lecture and dinner. First of four nights in Wrocław.

Wrocław. Slav by origin, for centuries Wrocław was predominently German (Breslau). The main square is dominated by the elaborate Gothic town hall and lined by a colourful assortment of Renaissance and Baroque mansions. In the academic quarter, and inside the 171m-long Collegium Maximum, the Aula Leopoldina is an ornate Baroque hall with illusionistic ceiling frescoes. Cross the Piaskowy Bridge to Cathedral Island. Among the highlights of the National Museum are Matejko’s Vows of King Jan Kazimierz Waza and an important collection of mediaeval sculpture. Overnight Wrocław.

Brzeg, Małujowice, Kamieniec Ząbkowicki. A second excursion into the Silesian countryside. The Renaissance castle at Brzeg has a remarkable sculptured entrance gateway, and there are extensive 15th-century wall paintings in the nearby village church of Małujowice. Kamieniec Ząbkowicki, a huge neo-Gothic country residence, was the last major project by the Prussian architect Karl Friedrich Schinkel (1838). Overnight in Wrocław.

Kzreszów, Świdnica. The magnificent Baroque abbey at Krzeszów, with imposing interiors, sculpture and paintings, is remarkably well preserved. Polish nuns expelled from Ukraine settled here after the War. The huge ‘Peace Church’ at Świdnica is an extraordinary building, constructed of timber and brilliantly exploiting the tight constraints of the terms under which Lutherans were permitted to build three churches in Catholic Silesia after the 1648 Treaty of Munster. Final night in Wrocław.

Wrocław, Kraków. Transfer to Kraków with lunch en route in Katowice. In the heart of the old town, the enormous mediaeval market square (the largest in Europe) has fine façades of many styles. The soaring Gothic church of St Mary contains the greatest of all late-mediaeval German sculpted altarpieces, by Veit Stoss. First of three nights in Kraków.

Kraków. A walking tour of the Old Town includes the St Florian Gate and the Furrier’s Tower above it, constructed (1300–07) as part of the city’s fortifications. See also the 15th-century university complex including the cloister, Collegium Maius and St Anne’s Church, a major work of Polish Baroque. In the afternoon visit the City History Museum and the Cloth Hall, still a covered market below and with a gallery of magnificent 19th-century Polish art above. Overnight in Kraków.

Kraków. Wawel Castle was rebuilt by Italian designers in the 16th century to become one of the earliest and greatest of Renaissance palaces north of the Alps, with arcaded courtyard and splendid interiors. Works of art include an excellent tapestry collection. The cathedral is also situated on Wawel Hill; essentially a Gothic structure, it is a Polish pantheon, with tombs of 41 monarchs and national heroes. Adjacent to Kraków but across a branch of the Vistula, Kazimierz was an independent town until the 19th century. Here the Jewish population was concentrated, but there are fine churches as well as synagogues and the former ghetto. It is a place of beauty as well as poignancy. Final night in Kraków.

Flights (economy class) on scheduled British Airways flights (Airbus A320); travel by private coach for transfers and excursions; hotel accommodation as described below; breakfasts, 3 lunches and 5 dinners with wine; all admission charges for places visited; tips for waiters, drives and guides; the services of the lecturer, tour manager and a Polish national guide.

Hotel Monopol, Wroclaw: a 5-star hotel in the Old Town in a historic building with a modern interior. H15 Palace, Krakow: a boutique 5-star hotel in a former palace close to the medieval main square.

There is quite a lot of walking, much of it on roughly paved streets. There are long drives on four of the days. Average distance by coach per day: 109 miles. 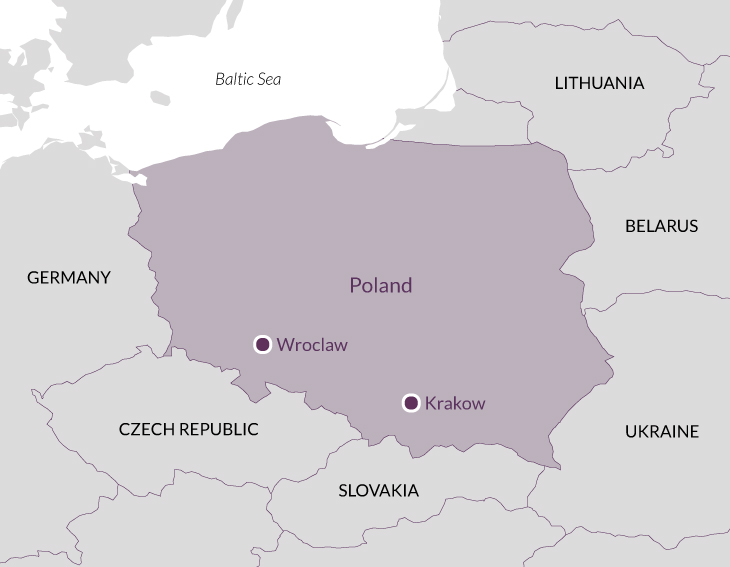