Medieval Burgundy - Abbeys and churches of the High Middle Ages

A superb collection of Romanesque and early Gothic buildings.

Numerous highlights include the magnificent remains at Cluny, Fontenay abbey, the choir at St Thibault, Vézelay, Notre-Dame at Dijon.

Many rural drives through beautiful landscapes.

The key to understanding medieval Burgundy is its situation, a cradle of wooded hills drained by three great river systems flowing, respectively, to the north, south and west. Not only did this lend the area the status of a lieu de passage, but it guaranteed its importance, ensuring that the medieval duchy was open to the forms and traditions of far-flung regions.

Remarkably, much of Burgundy’s medieval infrastructure survives. Even extending back as far as the ninth century, for in the interlocking spaces of the lower church at St-Germain d’Auxerre one might catch a glimpse of western Carolingian architecture and painting, a glimpse that presents this most distant of periods at its most inventive and personal.

It is equally the case that while the great early Romanesque basilicas which once studded the underbelly of the Ile-de-France are now reduced to a ghost of their former selves, what survives in Burgundy is sublimely impressive, as one might see in that great quartet of crypts at Dijon, Auxerre and Tournus.

As elsewhere, the twelfth century is well represented, though the depth of exploratory work undertaken here cannot fail to impress. The fundamental Romanesque research was probably conducted to the south, at Cluny and in the Brionnais, but the take-up in central Burgundy was immediate, and in the naves of Vézelay and Autun one might see two of the most compelling essays on the interaction of sculpture and architecture twelfth-century Europe has produced.

Nor were Cistercians slow to tailor Burgundian architecture to suit their needs, and though her great early monasteries have now perished, at least Fontenay survives, ranking among the most breathtaking monastic sites of medieval France. Gothic also arrived early, and there began a second wave of experimentation, tentative at first but blossoming in the centre (where the new choir at Vézelay is the first intimation we have that Gothic architecture had a future outside northern France) into perhaps the most lucid of all architectural styles.

It is thus no surprise that the thirteenth century saw the region at the cutting edge of Europe. At Auxerre a definitive account of space as illusion took shape, and at Semur-en-Auxois a theatre of stone clambered aboard the church. Moreover, the patrons invested heavily in glass. No thirteenth-century church was without it - and most have retained it, blazing the interior with a heady combination of light, meaning and colour. This sublime vigour even continued into the later middle ages, where under the Valois dukes of Burgundy, Dijon became a major artistic centre, attracting artists of the calibre of Rogier van der Weyden and Claus Sluter.

Take the Eurostar at c. 10.30am from London St Pancras to Paris and then onwards by TGV (high-speed train) to Le Creusot. Continue by coach to Tournus where two nights are spent.

Cluny, Berzé-la-Ville, Tournus. Cluny is the site of the largest church and most powerful monastery in medieval France. Study the magnificent remains of the church and monastic buildings. The tiny chapel at Berzé-la-Ville was perhaps built as the abbot of Cluny’s private retreat, and is embellished with superb wall paintings of c. 1100. At Tournus see the striking and immensely influential early 11th-century monastery.

Beaune, Autun, Dijon. The 15th-century Hôtel-Dieu in Beaune houses Rogier van der Weyden’s Last Judgement. The stalwart Romanesque church of Notre-Dame has fine tapestries. At Autun the cathedral of St Lazare is celebrated for its sublime sequence of Romanesque capitals and relief sculptures by Gislebertus. First of three nights in Dijon.

St Thibault, Semur-en-Auxois, Fontenay. The church of the market town of St Thibault has a 13th-century choir that is the most graceful Burgundian construction of the period. The fortified hill town of Semur-en-Auxois has a splendid Gothic collegiate church. The tranquil abbey of Fontenay is the earliest Cistercian church to survive and has an exceptionally well-preserved monastic precinct.

Dijon. A day dedicated to Burgundy’s capital and one of the most attractive of French cities with many fine buildings from the 11th to 18th centuries. St Bénigne has an ambitious early Romanesque crypt. Notre-Dame is a quite stunning early Gothic parish church. The palace of the Valois dukes now houses a museum with extensive collections of work from the period of their rule (1364–1477).

Saulieu, Avallon, Vézelay. Visit the Basilique St-Andoche in Saulieu, with carved capitals depicting flora, fauna and biblical stories. Drive north to Avallon, whose fine Romanesque church is spectacularly situated above the river Cousin. Vézelay, a picturesque hill town whose summit is occupied by the abbey of La Madeleine, was one of the great pilgrimage centres of the Middle Ages, and has one of the most impressive of all 12th-century churches for both its architecture and its sculpture. First of two nights in Auxerre.

Auxerre. The morning includes the magnificent Carolingian crypt of St Germain and the cathedral, a pioneering 13th-century building with exceptional glass and sculpture. The afternoon is free.

Sens. The striking cathedral of Sens is among the earliest Gothic churches of Europe, housing important glass and an exquisitely carved 12th- and 13th-century west front. The diocesan museum also houses an extensive collection of Roman and medieval antiquities. Take the Eurostar from Paris arriving at London St Pancras c. 6.30pm.

Train travel by Eurostar (Standard Premier) and TGV (first class); travel by private coach; accommodation as described below; breakfasts and 6 dinners with wine or beer, soft drinks, water and coffee; all admissions; all tips; all taxes; the services of the lecturer and tour manager.

There is quite a lot of walking, some of it on steep hillsides, and standing around. There is plenty of coach travel and you stay in three hotels. You will need to be able to lift your luggage on and off the train and wheel it within stations. Average distance by coach per day: 71 miles. 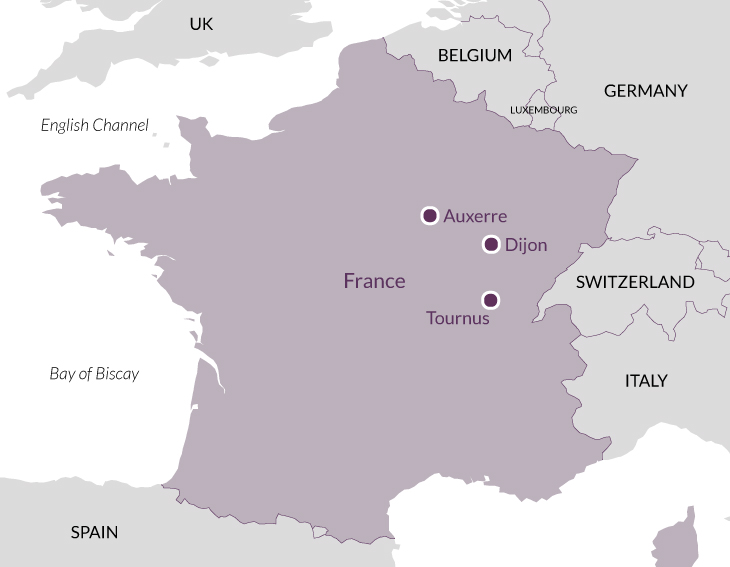 'Action packed. We saw several super places off the beaten track which we knew nothing about. We never got bored! A really wonderful holiday.'

'A good selection of abbeys and cathedrals. The tour was nicely paced.'

'I enjoyed this tour very much indeed. It was well planned then well executed. I have travelled with the lecturer before and cannot speak too highly of his attention to detail.'

'The lecturer was full of enthusiasm, knowledge and boundless energy - clearly had great love of the subject which was communicated highly effectively to us.'

'For me, it was the best course in Medieval history I have ever experienced.'

'John McNeill was the perfect lecturer on this trip. He has a deep knowledge of all aspects of the Romanesque and Gothic periods and is able to convey this knowledge in a way that is easily understandable and to put it in wider context. He has infinite patience and a very nice sense of humour.'