A highly important group of early medieval and Romanesque churches and the most spectacular Gothic cathedral in Italy.

Major art galleries and other collections in museums and palaces.

Excursions to Bergamo and Vigevano, among the loveliest towns in northern Italy, and to the magnificent Certosa di Pavia.

The Duchy of Milan – approximately coterminous with modern Lombardy – was the wealthiest and most powerful territory in medieval and Renaissance Italy, and its eponymous metropolis was possibly the largest city in Europe. A telling detail is that the greatest genius of his time, Leonardo da Vinci, chose to spend much of his working life in Milan rather than in other Italian cities that are now more commonly associated with artistic and intellectual endeavour.

The ruling dynasties in medieval Lombardy were the Visconti and, after 1450, the Sforza. They produced a string of feared rulers in Italy – but also created around them the most glittering court in the peninsula, the rival of any in Europe. Artists, musicians and men of letters flocked here to participate in the unending spectacle of court life and compete for unparalleled opportunities to exercise their talents.

Milan was no Renaissance upstart: it had been capital of the western Roman Empire for over a century, in succession to Rome itself, and in the Early Middle Ages remained a major centre of commerce, manufacture and church administration. At first, power coalesced around the archbishop but subsequently shifted towards civic institutions, the merchants and manufacturers, only to be seized in 1277 by a scion of the dominant family, Ottone Visconti – who, as it happens, was the archbishop.

Despite the vicissitudes of early modern history, when Lombardy was under occupation successively by France, Spain and Austria, Milan held its position as Italy’s most economically advanced city. And so it remains, a busy and prosperous capital, fashion and design to the fore, strewn with staggering architecture and world-class artworks. A surprising feature is that there are few tourists.

Fly at c. 10.30am from London Heathrow to Milan Linate (British Airways). After settling into the hotel, walk to the Poldi Pezzoli Museum, which houses a wonderful collection of decorative and fine arts in a 17th-century palace.

Milan. Start the day at Sant’Eustorgio, an important Early Christian church rebuilt several times during the Middle Ages and further embellished in the Renaissance. The Castello Sforzesco is a vast fortified palace, now with museums containing a variety of exhibits including room decorations by Leonardo and Michelangelo’s Rondanini Pietà. Finally, the Brera, one of Italy’s finest art galleries, where most of the great Italian artists are represented.

Certosa di Pavia, Milan. Drive out to the Certosa di Pavia, a Carthusian monastery which was generously endowed by both the Visconti and the Sforza families as their mausoleum. Gothic meets Renaissance in a church of exceptional decorative richness and a cloister of rare beauty. Back in Milan, see frescoes by leading Lombard painters of the 16th century at San Maurizio and the small but remarkable art collection in the Pinacoteca Ambrosiana.

Milan. Free morning, with the option of attending a church service. After lunch, there is a walk which includes the spectacular marble cathedral, the greatest Gothic building in Italy, and the nearby headquarters of the powers whose rivalry ensured a continuously lively (and sometimes deadly) political scene: bishop, duke and commune. Also see San Satiro, a jewel of the early Renaissance.

Vigevano. A very attractive little town, Vigevano has at its heart one of the largest castles in Italy, a major Sforza palace, a beautiful arcaded square and several churches of interest. Return to Milan to see the church of Sant’Ambrogio, one of northern Italy’s most important survivals from the Early Middle Ages, the fabric largely of the 4th–13th centuries. It contains precious metalwork and mosaics.

Bergamo. The Upper Town of Bergamo is among the most attractive old city centres in Italy. The Romanesque Basilica di Santa Maria Maggiore forms part of the superb architectural complex of the Piazza del Duomo. The adjacent Cappella Colleoni has frescoes by Tiepolo. Descending to the Lower Town, see the outstanding collection of paintings in the Accademia Carrara, and a church with an altarpiece by one-time resident Lorenzo Lotto.

Milan. The graceful Renaissance church of Santa Maria delle Grazie alone justifies a visit, though it is the refectory that gives the monastery fame: it is adorned with the world’s most famous wall painting, Leonardo’s Last Supper. Fly in the afternoon from Milan Linate, arriving London Heathrow at c. 5.30pm.

Rosa Grand Hotel, Milan: a smart 4-star hotel excellently located directly behind the Duomo. Rooms are well appointed in a clean, modern style. Single rooms are double for sole use.

There is quite a lot of walking on this tour and it is not suitable for anyone who has difficulties with everyday walking and stair climbing. Visits require a fair amount of standing around. Average distance by coach per day: 27 miles. 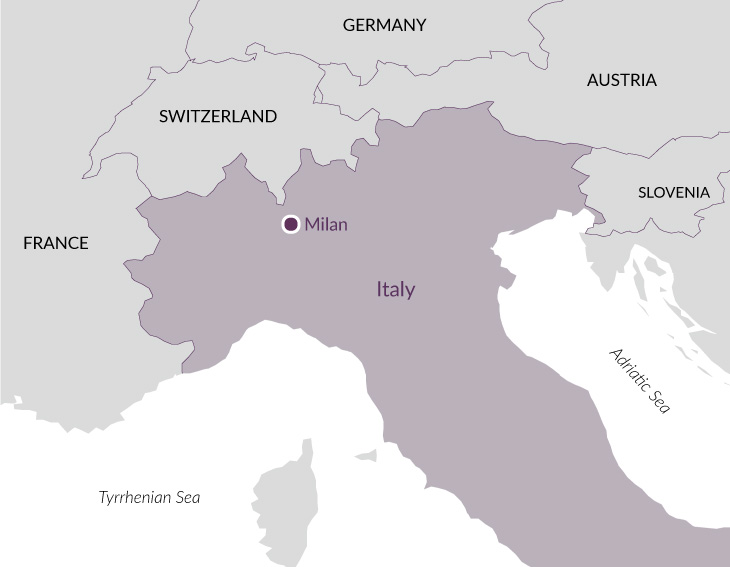 'We valued and enjoyed the profound knowledge and love of Renaissance art history that Luca shared with us, with grace and passion. A superb guide and lecturer!'

'A varied and well-planned programme. I particularly enjoyed the day visits to Vigevano and Bergamo, two delightful small towns. The Certosa di Pavia and Leonardo's ‘Last Supper’ were particular highlights.'