Memories of Monte Cassino - Stars and scars of the Italian Campaign

A walking tour offering unparalleled insight into a key moment in the Italian campaign, its history and landscape.

Explore in depth some of the most famous, least understood battlefields of the Second World War.

Led by a foremost military historian whose father fought in the campaign.

Based throughout at a four-star hotel, the former headquarters of the German army in San Pietro.

There are many tours to Cassino, but few of them grasp how the Italian campaign of 1943-44 unhinged the strategy of Hitler and his generals right across the European theatre. Normandy and the subsequent fighting tended to dominate the news, so much so that British troops in Italy often ruefully referred to themselves as ‘D Day Dodgers’! However, this tour will show how political grit, strategic thinking and the dogged courage of the Allied forces in Italy were major factors in the downfall of the Third Reich.

Similarly, much of the focus at the time centred on the monastery of Monte Cassino. Magnificently built, the medieval monastery dominated the surrounding countryside: the Allies claimed that their enemies were using it for military purposes, yet the Germans’ denial couldn’t save it from being bombed to rubble. This bombardment and the monastery’s subsequent capture by Polish troops are almost legendary, yet they are only a small part of the story.

In fact, fighting raged from well before the first assault on Cassino and even then, the monastery was not the key to the cracking of the Gustav Line – the defences that stretched right across the knee of the Italian boot. Few people understand that the landings at Anzio (70 miles north of Cassino) were integral to success on the Gustav Line. Even fewer realise that for nearly six months General Mark Clark’s 5th Army struggled and bled right along the banks of the Garigliano river before the German strongholds were pierced by the French Corps – whose commander has previously fought with the Germans.

Explore the breathtaking hills and villages near Cassino while tasting the valour of the men who seized them. The disastrous crossings of the Gari and Rapido rivers, the assaults on Minturno, Sant Ambrogio and Damiano, as well as the fighting around the monastery, are examined in detail. But what makes this tour extraordinary, beyond the scars and remains of battle, is the lecturer’s unique style of involving participants in the decisions that the troops and commanders had to take whilst under fire.

This is essentially an outdoor tour, with daily walks of up to two miles and moderate hills. But we will return at the end of each day to one luxurious hotel in the heart of the San Pietro battlefield; the perfect setting in which to appreciate how the ‘D Day Dodgers’ drove a stake into the heart of Nazism.

London to Naples. Fly from London Gatwick at c. 1.00pm to Naples (British Airways) and drive to the hotel at San Pietro. Drinks on the terrace and a talk on the strategic background to the Italian campaign and the landmarks of the surrounding countryside. Survey the monuments to the US 36th Texas Division to see where they grappled with the Germans. Overnight in San Pietro, where all six nights are spent.

Battle of Camino. A short drive away from the hotel lies the spectacular museum of the attack on Monte Lungo, where many of the tanks and vehicles and much of the weaponry that was used in these battles is on display. Ascend to the peak of Monte Camino from where the whole vista of the Gustav Line can be identified, with the prize of Rome in the distance. The hard fought actions by the Queen’s Regiment and the Brigade of Guards will be examined in detail.

The Battles for San Pietro. Having watched John Huston’s 1943 documentary film, ‘The Battle of San Pietro’, see for ourselves the initial attempts on the village, the armoured attack, the fighting among the buildings and the hiding places in which the civilian population sheltered. To complete the day, visit the spot where the US and Canadian Special Service Force captured the rocky heights of Monte La Difensa.

The first Battle of Cassino. The day starts with the first visit to Cassino monastery to appreciate the defences from the German point of view. Descend into the valley to examine the failure to cross the Rapido River – one of the most contentious stories of entire campaign and which caused a Congressional Inquiry. Drive south to the Garigliano to consider the British failure to cross the river before the little known triumph of the 5th and 56th Divisions’ crossings around Minturno. A visit to the Commonwealth Cemetery in Minturno ends the day.

The second and third Battles of Cassino. The impressive Polish Cemetery covers the slopes below the monastery and leads us up towards Snakeshead Ridge and the blood-soaked Point 593. From here the whole of the Allied objective of the Liri Valley is spread out below, while the arguments for and against the bombing of the monastery stand out starkly. The viscious fighting for Castle Hill and the New Zealanders’ attacks on the town of Cassino lead us to the Commonwealth Cemetery where men and women from every creed, race and regiment lie shoulder-to-shoulder.

Cassino, the final battle. Our final day takes us to the Liri Valley and the events of May 1944. Combining 5th and 8th Army’s muscle, Clark eventually cracked the Gustav Line, but not at Cassino – the French broke through well to the south, in the Aurunci mountains. We will see where this happened, where the Allied armoured finally poured across the rivers that had blocked the way and how Rome beckoned so tantalisingly.

Naples. As we drive to the airport to catch a mid-morning flight to Gatwick, the lecturer will sum-up the events of the winter and spring of 1943-44 before debating the advance on Rome and the capture of the first Axis capital. Fly Naples to Gatwick, arriving at c. 1pm.

Flights (Euro Traveller) with British Airways (Airbus 320); travel by private coach for transfers and excursions; hotel accommodation; breakfasts, 5 lunches (including some packed lunches) and 6 dinners with wine, water, coffee; all admissions; all tips; all taxes; the services of the lecturer.

There is quite a lot of walking (up to 2 miles) each day with modest hills on some days. There is also quite a lot of standing – up to 60 minutes’ – in exposed spots. Average distance by coach per day: 28 miles. 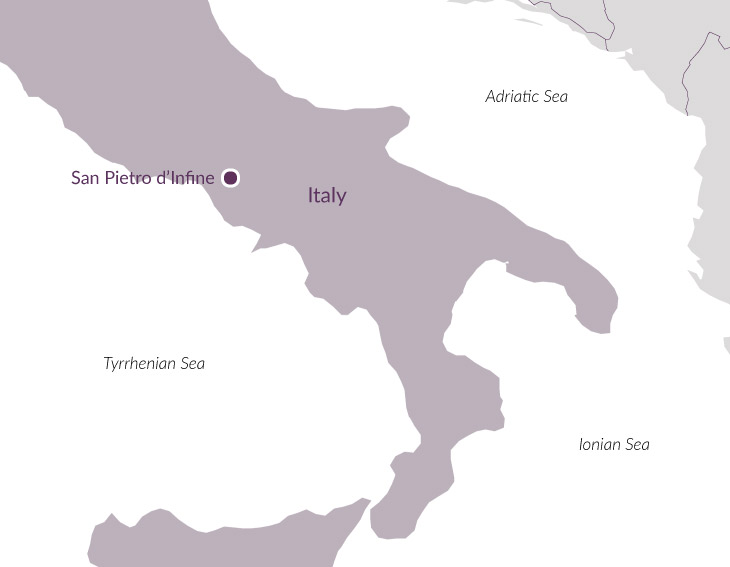