Selects the best of the art, architecture and antiquities in Naples.

Excursions to Amalfi, Ravello and the palaces and gardens at Caserta – with lunch in a private palace.

Naples is one of those rare places whose very name kindles a kaleidoscope of conflicting images. A highlight of the eighteenth-century Grand Tour, it is now all but ignored by mainstream tourism. Royal capital of the largest of the Italian kingdoms, in the twentieth century it became a byword for poverty and decline. Once it basked in a reputation for supreme beauty – ‘see Naples and die’; now it enjoys (false) notoriety as a pit of urban ills – chaos, congestion, corruption and Camorra.

Until recently there was some truth in all of these images of modern Naples. But the city has changed – not entirely, but it is one of the most heartening examples of inner-city regeneration of the last decade or so. Traffic is still appalling, but much of the historic centre is now pedestrianised. A burst of prosperity has transformed the ancient shopping and artisan districts. Restoration of buildings and works of art has further increased the beauty of the city, and more churches and museums are more often open and accessible. These museums display some of the finest art and antiquities to be found in Italy, and major architectural and archaeological sites are located nearby.

In striking contrast to the urban chaos of Naples, the Amalfi Coast is the most stunningly picturesque stretch of coastline in Italy. For a while during the Middle Ages, Amalfi rivalled Venice and Pisa as a maritime power intent on dominating trade in the Mediterranean, and its art and architecture are predominantly mediaeval in flavour. Both Ravello and Amalfi are delightful little towns, their cathedrals among the most impressive in the region.

Naples is a city of the south. In many ways it has more in common with Seville or Cairo than with Florence or Milan. It is a city of swaggering palaces and stupendous churches, of cacophonous street life and infectious vitality. Exciting, exhausting, energising.

Naples. A first walk through the teeming old city centre includes the Cappella Sansevero, a masterpiece of Baroque art and craft with multi-coloured marbles and virtuoso sculptures, and S.ta Chiara, an austere Gothic church with a delightful Rococo tile-encrusted cloister. Also among the other treasures seen are the churches of Il Gesù Nuovo and S. Domenico Maggiore.

Amalfi, Ravello. Amalfi is one of the loveliest coastal resorts in Italy, its churches, towers and arcaded houses rising above a small harbour and backed by high rugged cliffs. The Saracenic-Norman cathedral has a delightful cloister, the ‘Chiostro del Paradiso’. Ravello sits in a beautiful position in the hills above Amalfi, and has a fine Romanesque cathedral. Visit the Villa Rufolo, a wonderful 13th-century palace with a cloister of Saracenic influence and an evocative garden.

Naples The Castel Nuovo, also known as ‘Maschio Angioino’, is a mediaeval castle located on the waterfront in Piazza Municipio. It houses the Civic Museum and its Cappella Palatina contains frescoes by Giotto. Also seen are two works by Caravaggio: his Seven Acts of Mercy in the chapel for which it was commissioned and his Martyrdom of St Ursula in a bank. The Villa Pignatelli on the Riviera di Chiaia is one of the most important examples of neo-classical architecture in Naples.

Caserta. Situated a few miles outside Naples, the royal palace at Caserta, begun 1751, is Italy’s most magnificent and accomplished emulation of Versailles. An awesome absolutist statement, the apartments are superbly decorated and furnished and it is set within parkland and gardens equally magnificent in scale. Lunch is at a private palace.

Christmas Day. Free morning, with a range of options for a church service, followed by Christmas lunch.

Naples. The morning is spent at the National Archeological Museum, one of the world’s greatest collections of Greek and Roman antiquities. Many items come from the excavations at Pompeii and Herculaneum. High on a hill which provides stunning views over the city and the Bay of Naples, the monastery of S. Martino has a church of extraordinary lavishness of art and decoration and a museum of fine and decorative arts.

Naples. Free morning. In the afternoon, drive into the hilly suburbs to visit the palace of Capodimonte, originally a giant hunting lodge. Here is located one of Italy’s greatest art galleries, with a magnificent range of art from the Middle Ages onwards. Fly from Naples to London Gatwick, arriving at c. 8.45pm.

Flights (Euro Traveller, Airbus 319) with British Airways; travel by private coach; hotel accommodation as described below; breakfasts; 2 lunches and 4 dinners with wine, water, coffee; all admissions; all tips; all taxes; the services of the lecturer and tour manager.

Hotel Excelsior, Naples: a 4-star hotel on the waterfront about 15 minutes on foot from Piazza Plebiscito, with spectacular views of Mount Vesuvius and the island of Capri. Rooms are all of a good size. Single rooms throughout are doubles for sole use. Sea views are available on request and for a supplement.

A large swathe of central Naples is inaccessible to traffic, certainly to coaches. Pavements are often uneven, some roads are steep, traffic can be unpredictable. A good level of fitness is necessary. It should not be attempted by anyone who has difficulty with everyday walking and stair-climbing. Average distance by coach per day: 26 miles. 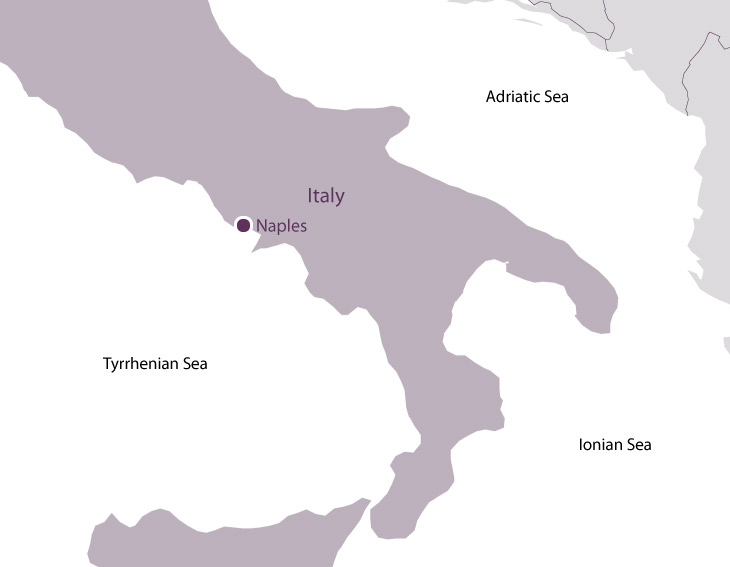