Normans in the South - Castles & cathedrals in Puglia, Basilicata & Campania

An architectural tour of one of the most sophisticated kingdoms in medieval Europe.

Splendid Norman legacy of Romanesque, with churches of unprecedented size and grandeur.

Later architecture of equal magnificence, in particular an elaborate flowering of Baroque.

The Norman conquest of southern Italy was one of the most remarkable episodes in medieval history. Whereas England was subjugated by a sizeable and highly organised Norman army, the ‘Kingdom in the Sun’ was won by small bands of soldiers of fortune. They trickled in during the eleventh century when the tangled political situation and incessant feuding made the area ripe for exploitation by ambitious knights in search of adventure and personal gain.

By the end of the century they had expelled the Byzantines from the mainland and the Saracens from Sicily, and by 1127 all Sicily and southern Italy was ruled by one Norman king.

This cosmopolitan kingdom was one of the best administered and most culturally sophisticated in Europe. As in England, in the wake of conquest there arose splendid new churches of unprecedented size and grandeur. A mixture of French, Lombard, Byzantine, Saracenic and ancient Roman elements, south Italian Romanesque is one of the most distinct and beautiful of the variants of this truly international style.

Prosperity and creativity continued after the extinction of the Norman dynasty in 1194 by the Hohenstaufen from Germany. In the first half of the thirteenth century the region was dominated by the extraordinary Emperor Frederick II, ‘Stupor Mundi’, ‘Wonder of the World’. He was as courageous and ambitious in artistic and intellectual spheres as he was in administration, diplomacy and war.

Much later there was another artistic outburst, appropriately international but characteristically idiosyncratic: a highly elaborate version of Baroque architecture and decoration.

The heel and spur of boot-shaped Italy, Puglia is remote from the better-known parts of the peninsula, and its raw limestone landscape wholly different from the silky richness of central and northern Italy. The last day of the tour is spent across the Apennines in Campania. This region presents another face of Italy, distinctly southern but with an equally cosmopolitan and pan-Mediterranean cultural history.

Fly at c. 6.45am (Alitalia) from London Heathrow to Brindisi, via Milan. Drive to Lecce, stopping on the way to visit the Romanesque church of Santa Maria del Casale, near Brindisi. First of three nights in Lecce.

Squinzano, Gallipoli, Otranto. Explore the Salentine Peninsula, the southernmost tip of the heel of Italy. Visit the Abbey of Sta. Maria di Cerrate, a 12th-century Romanesque complex. Gallipoli was the centre of Byzantine Italy until conquered by the Normans in 1071; the old town is on an off-shore island. Otranto, captured by Normans in 1068, has a cathedral with outstanding 12th-century floor mosaics.

Lecce. Lecce is distinguished by an elaborate style of Baroque and Rococo decoration wrought in the soft, honey-coloured tufa of the region, an outstanding example being the church of Sta. Croce. See also the Norman church of SS. Niccolò e Cataldo, founded by Tancred. Some free time.

Brindisi, Bitonto. Possessing the safest natural harbour on the Adriatic, the provincial capital of Brindisi has been of intermittent strategic importance for over 24 centuries. Visit S. Benedetto, with its Romanesque bell tower. Bitonto has one of the finest of Romanesque cathedrals with good sculpture and an early Christian lower church. Continue to Trani where the next four nights are spent.

Bari, Trani. Bari, capital of Puglia, has an extensive and unspoilt medieval quarter beside the sea. The Basilica di S. Nicola, begun in 1087, is not only the first but also the greatest of Puglian Romanesque churches; the episcopal throne here is remarkable. Also visit the cathedral (1170) and later medieval Angevin castle. Back in Trani, visit the magically beautiful Romanesque cathedral on the waterfront.

Canosa, Troia, Venosa. Canosa di Puglia has an 11th-century cathedral. The cathedral in Troia is influenced by Pisan Romanesque and Arabic art, and houses re-used Roman columns. Leave Puglia for Basilicata: the impressive but unfinished Abbazia della SS. Trinità at Venosa was built from the 12th-century over an early Christian church. Return to Puglia for the final night in Trani.

Benevento, Salerno. Cross the Apennines to Campania. Benevento was a strategic Roman colonia, Lombard Duchy and Norman from 1081. The Arch of Trajan is  one of the finest surviving Roman triumphal arches. Sta. Sofia has a magnificent 12th-century cloister. The seaport of Salerno has an 11th-century cathedral with a fine sculpted portal and a 12th-century ivory altarpiece. Overnight in Seiano.

Flights (economy class) with British Airways (aircraft: Airbus 320); travel by private coach; hotel accommodation; breakfasts, 1 lunch and 5 dinners with wine, water, coffee; all admissions; all taxes; all tips; the services of the lecturer.

Patria Palace Hotel, Lecce: stylish 5-star hotel in an excellent location near the church of Sta. Croce in the historic centre. Hotel San Paolo al Convento, Trani: charming 4-star hotel converted from a 15th-century convent. Grand Hotel Angiolieri, Seiano: modern 5-star hotel in the village of Seiano, close to the town of Vico Equense. Single rooms are doubles for sole use throughout.

The tour involves a lot of walking on uneven pavement in archaeological sites as well as in the town centres where vehicular access is restricted. It should not be attempted by anyone who has difficulty with everyday walking and stair-climbing. Fitness is essential. Some days involve a lot of driving. Average distance by coach per day: 99 miles. 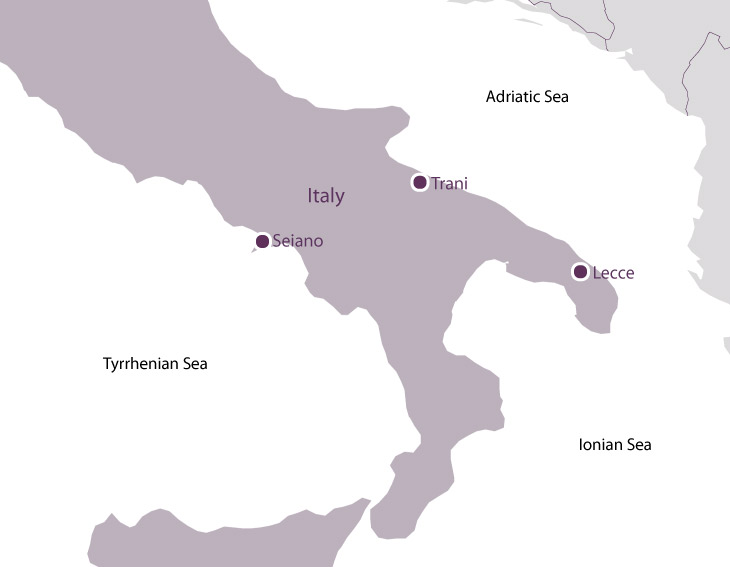 'I loved every minute - even though we visited many places we did not seem rushed - the pace was perfect.'

'The choice of itinerary was brilliant – a wonderful tour of Byzantine and Norman churches. The lecturer was impressively expert and willing to chat and answer questions. Excellent.'

'The lecturer was very informative and good company too. I enjoyed his talks immensely. The tour manager was a great asset.'