Explore the most influential of all ancient civilisations through physical remains both in Rome itself and in Umbria and Campania.

Great monuments and details of daily life, the highest achievements of art, architecture and engineering as well as everyday ephemera.

A study of history, society and literary culture as well as of the built environment.

The remains of Roman Italy continue to fascinate and astound, nowhere more so than in Rome itself. From the beating heart of the Republic in the Roman Forum to the seat of the emperors on the Palatine Hill, the monuments of Rome chart its history as it was transformed from a plucky little city-state to the magnificent capital of an empire of unprecedented size.

The Colosseum, the Baths of Caracalla, Hadrian’s sprawling Villa at Tivoli – these are among the many stunningly impressive structures which bear silent testimony to political, social and cultural upheavals. But not all survivals were creations of the elite. Rome still retains traces of the quotidien, workaday city with which every Roman was familiar. Water flowed into the city through the aqueducts and goods came up from the port at Ostia via the Tiber. The piles of broken amphorae at the Monte Testaccio contrast with the luxury goods on display in museums. Spiritual life is present too, in the many temples, Augustus’s Altar of Peace or at the Temple of Fortuna at Praeneste.

Many of the most intriguing and beautiful remains of Roman Italy lie outside the capital. To the north, amid the green lands of Umbria, the imprint of Rome is still present in the hilltown of Spoleto and at Carsulae, almost unknown but one of the most enthralling archaeological sites in Italy. To the south, Campania had a particularly strong bond with Rome because the wealthy, seeking refuge from city summer heat, built villas around the Bay of Naples. Campania became a playground for the rich and powerful, emperors among them.

It is in this region that two of the world’s most evocative archaeological sites are to be found, courtesy of the eruption of Mount Vesuivus in AD 79. There is a paradox here: the same volcanic ash which brutally terminated many thousands of lives in Pompeii and Herculaneum also preserved the fabric of these towns down to the minutest details of daily life to an extent unparalled anywhere else.

It is these ephemera of everyday life which provide unique insight into the lives of people who lived two thousand years ago. The empathy provoked is potent and moving, and counterpoints eloquently with the grander achievements of Roman architects, engineers, soldiers and statesmen.

Fly at c. 10.45am (British Airways) from London Heathrow to Rome. Drive to Spoleto, where the first of two nights are spent.

Spoleto, Carsulae. Drive out to the Parco Archaeologico at Carsulae, one of the most impressive archaeological ruins in Italy. An afternoon walk in Spoleto includes the Roman theatre and triumphal arch. There is some free time to see something of mediaeval and Renaissance Spoleto.

Tivoli, Rome. Hadrian’s extraordinarily lavish villa at Tivoli was designed by the emperor himself, drawing inspiration from the sites he saw during his travels. Continue to Rome. Visit the Baths of Caracalla, the best preserved of the several such complexes that emperors constructed in the capital for general enjoyment. First of four nights in Rome.

Rome. Among today’s highlights are the Pantheon, best preserved of Roman buildings, the Ara Pacis, Augustus’s beautifully sculpted altar, and Trajan’s Markets, remarkably complete and evocative. See also the Capitoline Museums, which have some of the best ancient sculpture in Rome and provide access to the administrative heart of Republican Rome.

Ostia, Rome. Drive to Ostia, the ancient port of Rome at the mouth of the Tiber. Silt led to its decline and abandonment. In the preservation of everyday details it is comparable to Pompeii – though without the crowds. Some free time in Rome.

Rome. The Forum Romanum, the civic, religious and social centre of Ancient Rome, has the remains of many structures famed throughout the Empire. See also Monte Testaccio, a hill formed entirely of fragments of broken amphorae. Outstanding among the displays in the National Roman Museum are the frescoes and stucco work.

Rome, Seiano. Visit the Colosseum, largest of ancient amphitheatres, and the Arch of Constantine, sculpturally the richest of triumphal arches. The Palatine Hill was the site of the luxurious palaces of successive emperors. In the afternoon travel by first-class rail to Naples, then coach to the hotel. First of three nights in Seiano.

Pompeii. Since its discovery in the 18th century, ancient Pompeii has been the world’s most famous archaeological excavation. It’s fascination lies not only in the public buildings such as theatre, temples and forum but also in the numerous dwellings, from cramped apartments to luxurious houses with mosaic pavements and gaudily frescoed walls.

Herculaneum, Oplontis. At Herculaneum, fragile artefacts have been preserved by the unique conditions of burial. In the small part of the town that has been excavated, private dwellings predominate, many with wonderful decoration. The lavish villa at Torre Annunziata (ancient Oplontis), one of the loveliest of ancient sites, may have been the home of Poppaea, wife of Nero.

Naples. The Archaeological Museum in Naples is the principal repository for both the small finds and the best-preserved mosaics and frescoes discovered at Pompeii and Herculaneum. Fly from Naples to Gatwick, arriving c. 8.45pm.

Flights with British Airways (Euro Traveller, Airbus 320); train travel from Rome to Naples; travel by private coach, minibus or taxi; hotel accommodation; breakfasts, 2 lunches (including 1 picnic) and 6 dinners with wine, water, coffee; all admissions; all tips; all taxes; the services of the lecturer.

The tour departs from London Heathrow airport and returns to London Gatwick. There are no flights from Naples to London Heathrow, so it is not possible to fly both ways from/to Heathrow. It is possible to fly from Gatwick to Rome, but the current flight schedule would mean a very late arrival at the hotel in Spoleto. If British Airways changes its schedule we will endeavour to secure outbound flights from Gatwick so that the tour begins and ends at the same London airport.

Hotel San Luca, Spoleto: a comfortable 4-star hotel, located in an elegantly converted former tannery. It is situated conveniently just within the city walls. Hotel Bernini Bristol, Rome: 5-star hotel excellently located on the Piazza Barberini. Grand Hotel Angiolieri, Seiano: a modern 5-star hotel on the hill-top above the town of Vico Equense. Rooms with a sea view are available on request and for a supplement. Single rooms are doubles for sole use throughout.

There is unavoidably a lot of walking, some of it over very rough ground and there is a lot of standing in museums and on archaeological sites. The day spent in Pompeii can be tiring. The historic area in Rome is vast, and vehicular access is increasingly restricted. Minibuses are used on some occasions but otherwise the city is traversed on foot. The tour should not be attempted by anyone who has difficulty with everyday walking and stair-climbing. Fitness is essential. Average distance by coach per day: 43 miles. 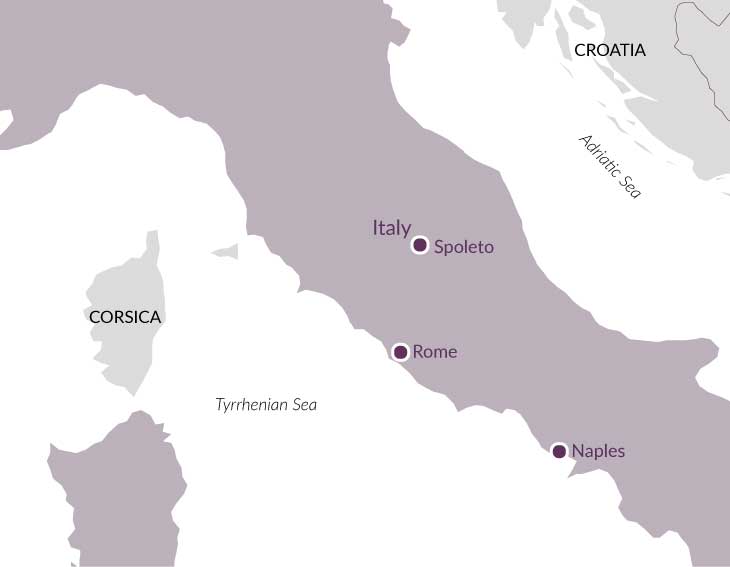