San Gimignano is one of the most extraordinary of Italian hill towns.

Two visits to nearby Siena, distinguished by architectural and artistic design of an exquisite elegance.

Towards the end of an autumn afternoon, when the last of the day trippers have departed and the shutters have clattered down on the souvenir shops, an ineffable timelessness descends. While dusk begins to obscure the hills and darken the streets, the inhabitants get on with their lives – shopping, socialising, doing business – amidst the most extraordinary streetscape in Europe. The ordinary within the quite extraordinary – that is the charm of Italy. San Gimignano is not a museum but a living country town.

It is also so improbable a phenomenon, with fourteen thirteenth-century hundred-foot stone tower houses, that a day trip does not always suffice to eradicate incredulity, let alone allow the visitor to feel the austere magic of the place. Scarcely changed in appearance for six hundred years, and looking like a balding porcupine in a searingly beautiful Tuscan landscape, the town provides a microcosm of life and art in medieval Italy.

The towers and circuit of walls were built not only in response to hostilities with neighbouring city-states but also to the incessant conflict between the swaggering, belligerent nobility and the emergent merchants and tradesmen.

Nevertheless, the little city flourished. A nodal point on the main north-south road to Rome, hospices and friaries swelled to serve pilgrims, officials and traders. Wealth, pride and piety conspired to attract some of the best artistic talent to embellish the churches. But San Gimignano never recovered from the double blow of the Black Death of 1348 and submission to Florence shortly after.

Extending the theme of hilltop towns, visits are made to two of the greatest: Volterra, rugged and dour, and Siena, the largest and the most beautiful of them all. Spilling across three converging hilltops, Siena contains perhaps the most extensive spread of medieval townscape in Europe. Culturally the city reached its peak in the late thirteenth and early fourteenth centuries. There is plenty of excellent Renaissance art here, but it is medieval painting for which the city is best known. Duccio, Simone Martini and the Lorenzetti brothers were among a host of brilliant artists who created the distinctive Sienese style: exquisite delicacy of design, detail and colour, and images which are godly yet humane, numinous yet naturalistic.

This tour provides opportunity for a concentrated study of Siena, not only its art and architecture but also its history. Medieval sculpture and painting is its main subject matter because of its exceptional quality and quantity, but Renaissance and Mannerist painters such as Pinturicchio, Sodoma and Beccafumi are also surveyed.

San Miniato. Fly at c. 7.15am (British Airways) from London Heathrow to Pisa. Drive to San Miniato, whose highly strategic location on both the Via Francigena and the main route between Pisa and Florence meant that it was one of the most important imperial centres in Tuscany in the 12th and 13th centuries. See here the church of S. Domenico, before driving to Colle Val d’Elsa, near San Gimignano,  where all four nights are spent.

Siena. Siena is the largest of hilltop towns in Tuscany (it is in fact a city), distinguished by red brick and architectural and artistic design of an exquisite elegance. The cathedral museum contains Duccio’s Maestà, the largest of all medieval altarpieces. The 14th-century Palazzo Pubblico has frescoes by Simone Martini and the Lorenzetti brothers. Visit also the cathedral, an imposing Romanesque and Gothic construction of white and green marble with outstanding Renaissance sculpture and painting including Pinturicchio’s brilliant frescoes in the Piccolomini Library and the font by Ghiberti, Donatello and Jacopo della Quercia.

San Gimignano. Visit the Romanesque collegiate church containing two great cycles of trecento frescoes depicting scenes from the Old and New Testaments. The town hall also has 14th-century frescoes and houses a small art gallery. Among the Renaissance works of art seen today are frescoes by Benozzo Gozzoli and an altarpiece by Pollaiuolo in the church of S. Agostino. Study the development of the city in the streets, alleys and squares, and walk along a stretch of the walls.

Volterra, Siena. A wonderful morning drive through Tuscan hills to the episcopal seat of Volterra (which in the early Middle Ages claimed suzerainty over San Gimignano), a rugged medieval hilltop town. Visit the art gallery and the Romanesque cathedral, which has fine Renaissance sculpture. Return to Siena to visit the hospital of Sta. Maria della Scala, with its exceptional collection of Renaissance frescoes.

Drive to Pisa for the flight to London Heathrow, arriving c. 2.00pm.

Dr Michael Douglas-Scott mixes scholarship with accessible discourse, with reasoned opinion, and is highly sought-after as an art history lecturer. He has lectured for New York University (London campus) and Birkbeck College, University of London, specialising primarily in 16th-century Italian art and architecture. He studied at the Courtauld and Birkbeck College and lived in Rome for several years. He has written articles for Arte Veneta, Burlington Magazine and the Journal of the Warburg & Courtauld Institutes.

Flights (Euro Traveller) with British Airways (Airbus 320); travel by private coach; hotel accommodation; breakfasts; 1 lunch and 3 dinners with wine, water, coffee; all admissions; all tips; all taxes; the services of the lecturer.

There is a lot of walking on this tour, some of it on uneven ground and much of it uphill. Coaches are not allowed inside the walls of any of the towns visited. Fitness is essential. Some days involve a lot of driving. Average distance by coach per day: 51 miles. 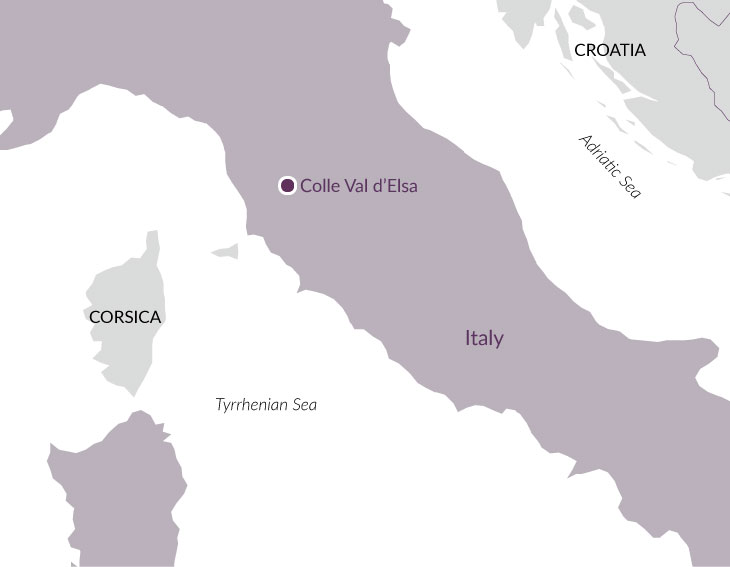 'An excellent selection of visits carried out at a sensible pace.'

'Perfectly organised. Just the right amount of time in each location.'

'The company and the people one meets on a MRT holiday are a good part of the enjoyment.'