Rich artistic and architectural centres from the Adriatic to Lake Garda: Padua, Verona, Vicenza, Treviso, and many others.

Spans an entire region from one base, Vicenza, Palladio’s home town.

For centuries the Veneto comprised the heartland of Venice’s terra ferma empire, stretching from the Adriatic to Lake Garda, and from the plain of the Po to the foothills of the Dolomites. But the Veneto is no mere subordinate appendage to La Serenissima, culturally or politically. The region is too large and varied for such relegation, and has a history which is far longer than that of the upstart maritime republic.

The towns and cities on this tour are among the most illustrious and art-historically important places in Italy, as well as being some of the most attractive. Most have Roman or pre-Roman origins; at many the mediaeval circuit of walls is still intact.

In the fields of painting and sculpture the Trecento (fourteenth century) is particularly well represented, with Giotto’s finest fresco cycle heading the list. From the fifteenth century are masterpieces by Pisanello, Donatello, Mantegna and Bellini; great paintings by Titian, Giorgione and Veronese show the High Renaissance to advantage, and the eighteenth century is represented by Tiepolo, the consummate master of the age.

Architecture ranges from Roman through Romanesque to Gothic, and on to Renaissance and Neoclassical. There are some great buildings here, but the appeal of the tour lies as much in the vernacular and the streetscape as in monumental set pieces.

A recurring theme is the genius of Andrea Palladio. To this one man is owed the appearance of most of the villas in the countryside, and indeed of much of eighteenth-century England, for he became the most internationally influential of all Italian architects. Work by another Italian architect also makes repeated appearances: Carlo Scarpa created some of the most affecting designs of the twentieth century, blending old with new.

Fly at c. 08.50am (British Airways) from London Gatwick to Venice and drive to Vicenza, where all seven nights are spent.

Vicenza. The beautiful little city of Vicenza is architecturally the noblest and most homogenous in northern Italy, much of the fabric consisting of Renaissance palaces. Andrea Palladio spent most of his life there, and his buildings include the town hall (Basilica Palladiana), an epoch-making theatre (Teatro Olimpico) and several aristocratic residences, one of which, the Palazzo Chiericati, houses an excellent art gallery.

Verona. A major Roman settlement, Verona also flourished in the Middle Ages under the tyrannical rule of the Scaligeri dynasty. A sequence of interconnecting squares lie at the heart of the city, lined with magnificent mediaeval palazzi. The vast Gothic church of Sta. Anastasia has a fresco by Pisanello and S. Zeno is a splendid Romanesque church with an altarpiece by Mantegna. The elegant red-brick castle contains a very fine art gallery.

San Vito, Asolo, Possagno. The Brion cemetery complex at San Vito by Carlo Scarpa is 20th-century architecture at its most beautiful and moving. There is a lunch break at Asolo, a lovely hilltop town with a Lorenzo Lotto altarpiece in the cathedral. Possagno was birthplace of the leading Neoclassical sculptor Antonio Canova and he rebuilt the church as his memorial, a cross between the Pantheon and Parthenon. Full-scale models for many of his sculptures have been assembled in a museum.

Padua. Giotto’s fresco cycle in the Arena Chapel is one of the greatest achievements in the history of art and marks the beginning of the modern era in painting. Further outstanding 14th-century fresco cycles are by Giusto de’ Menabuoi in the Baptistry and by Altichieri in the vast multi-domed Basilica of St Anthony. The Renaissance is represented by Donatello’s altar panels here and the bronze equestrian statue outside, the Gattamelata. The mediaeval town hall and surrounding squares are among the finest of such ensembles in Italy.

Vicenza, Vicentine villas. There is free time in Vicenza in the morning. The afternoon excursion is to places just outside the city: the hilltop ‘La Rotonda’, the most famous of all Palladian villas, and the adjacent Villa Valmarana ‘ai Nani’, with superb frescoes by Giambattista Tiepolo and his son.

Treviso. Once an important fortress city, Treviso has a fine historic centre with imposing public buildings and many painted façades. The cathedral has a Titian Annunciation, but the hero of the day is the 14th-century painter Tommaso da Modena: his frescoes of learned monks in the chapter house of St Nicholas are extraordinary, as is the St Ursula cycle in the church of Sta Caterina.

Castelfranco Veneto. Drive to the delightful little walled town of Castelfranco. The cathedral has Giorgione’s wonderful Madonna Enthroned and a museum in his house next door. Explore one of Palladio’s most evolved, most beautiful and most influential buildings, the Villa Cornaro at Piombino Dese. Fly from Venice, returning to Gatwick at c. 6.30pm.

Flights (Euro Traveller) with British Airways (Airbus 320); travel by private coach; hotel accommodation; breakfasts; 1 lunch and 4 dinners with wine, water, coffee; all admissions; all tips; all taxes; the services of the lecturer.

Hotel Campo Marzio, Vicenza: just outside a city gate of Vicenza, this 4-star hotel is well located and comfortable, with decent-sized rooms. Single rooms are doubles for sole use.

The tour involves a lot of walking, sometimes uphill and over unevenly paved ground. The coach can rarely enter town centres. Fitness and sure-footedness are essential. Average distance by coach per day: 50 miles. 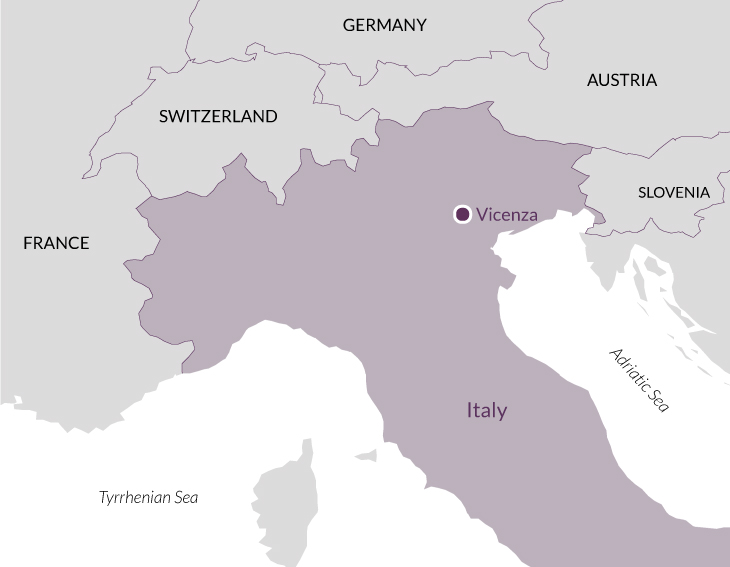 'Very well thought out and provided an attractive blend of art and architecture.'

'Michael Douglas-Scott is an outstanding expert for this part of the world, informative, entertaining and very approachable even when “off duty”.'