The stirring landscape of the west coast of Ireland is still largely unspoilt.

The Dingle Peninsula, the Burren, the Aran Islands.

The west coast of Ireland is one of the richest archaeological landscapes in Europe, its piquancy by juxtaposition with the surviving, though much threatened, Gaelic culture. There is a mixture of prehistoric and historical sites (there are no Roman or Saxon remains in Ireland), monastic and early Christian sites, country houses, small museums and other treats strung out along one of the most beautiful coastlines in Europe.

Irish archaeology and history offer a wealth of information, due partly to the extraordinary amount of survey and excavation carried out in the last three decades. From 10,000 years ago, the first hunter-gatherers moved across the island, exploiting the rich land and sea life of the western seaboard. From 6,000 years ago, complex societies were established and the development of a series of tombs bears witness to the structure of society at this time. From 4,000 years ago, Bronze Age and Iron Age Ireland produced incredible gold torcs, wonderful jewellery and fascinating evidence of religious beliefs and rituals, contact with people overseas, and an increasingly stratified society.

With the introduction of Christianity, many aspects of pagan practices were absorbed into the new belief. The arrival of the Vikings in 795 (Dublin became one of the largest Viking settlements outside of Scandinavia) brought new challenges and the beginnings of urbanisation. Ongoing conquest and colonisation from the east continued piecemeal to the end of the 17th century.

Closer to our time, rising rural populations led to a catastrophic famine and the deaths of one million people, the single largest loss of life in 19th-century Europe. Mass emigration to Britain and North America followed, and with it, ironically, a rising consciousness of the cultural importance of this disappearing Gaelic world. This awareness provided inspiration for the remarkable cultural literary revival at the end of the 19th century, and is something which remains to this day.

This tour explores the rich rural landscapes, studded with small towns and villages, of the south and west coasts. The vast bulk of the country is still beautiful, and offers a happy balance between first-rate archaeological sites and unspoilt scenery, comfortable accommodation and relative peace and quiet. In addition, the food is of a high standard, and the daily catch can bring in all sorts of delights.

The coach leaves Cork Airport at midday; alternatively, meet at the hotel. (Several airlines link Cork with various UK airports so flights are not included in the package.) The beautiful coastal town of Kinsale has a rich maritime history; the battle in 1601 was a turning point in Irish history, with the rule of the English prevailing. Visit the 17th-century, star-shaped Charles Fort. Overnight in Kinsale.

Killarney, Dingle. Leave west Cork for Killarney National Park and see the earliest Bronze Age copper mine in northwest Europe. Drive along the dramatic south coast of the Dingle peninsula passing Inch and Anascaul, a landscape of mountains and sandy beaches. First of two nights in Dingle.

the Dingle Peninsula. Drive around Slea Head (the westernmost point of Europe) to Dunquin and associated sites. The area is dotted with beehive huts, standing stones, and early monastic sites. Visit the Blasket Islands’ Visitor Centre and Ferriter’s Cove, the earliest Mesolithic site in the southwest of Ireland. Continue to the monastic sites of tenth-century Riasc, the perfectly preserved eighth-century Gallarus Oratory, and the 12th-century church at Kilmalkedar. Visit the region’s museum in the village of Ballyferriter.

County Clare. Visit the 15th-century castle at Listowel, once occupied by the Firzmaurice lords of Kerry and occupying the location of the original 13th-century castle which fronted on to the river Feale. Cross the Shannon by ferry and pass through the spectacular landscape of the Burren in north County Clare. Visit the 12th-century Kilfenora Cathedral, with its high crosses and glass-roofed chancel. First of three nights near Ballyvaughan.

The Aran Islands. The Aran Islands have captivated visitors for hundreds of years; distinctive geology and landscape alone make it a memorable trip, the archaeology makes it unforgettable. Occupation dates from the eighth century bc. Here in the 1890s J.M. Synge came to record the islands’ folklore and traditions which inspired his dramatic writings. By ferry to Inishmore, with views back to the Cliffs of Moher, for a day on the island exploring ring forts, churches and grave sites.

The Burren. Visit Ailwee Cave, the largest and most spectacular cave in Ireland. Leamaneh Castle dates to the 15th century, and surrounding it is a medieval landscape of ancient roads and ruins. Continue north through the Burren to view prehistoric Poulnabrone dolmen.

Kilmacduagh, Shannon. The 11th-century slightly leaning 100ft tower at Kilmacduagh is on a monastic site with four ruined churches. From here drive to Shannon Airport where the tour ends by 3.15pm.

Travel by private coach; accommodation as described below; breakfasts; 2 lunches and 6 dinners with wine, water, coffee; all admissions; all tips; all taxes; the services of the lecturer and tour manager.

Flights from London to Cork and Shannon to London are not included in the price of the tour. We will send the recommended flight options when they are available to book and ask that you make your own flight reservation. The cost of an economy seat at the time of going to press is c. £200.

The tour involves a lot of walking on archaeological sites. Uneven ground, irregular paving, steps and hills are standard. A good level of fitness is essential. Unless you enjoy entirely unimpaired mobility, cope with everyday walking and stair-climbing without difficulty and are reliably sure-footed, this tour is not for you. Average distance by coach per day: 61 miles. 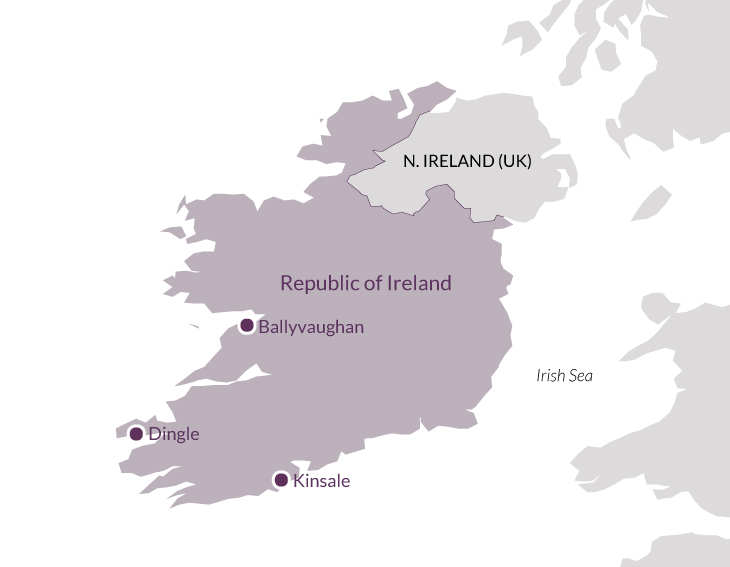