Includes Fallingwater, Robie and Taliesin houses, Johnson Wax Building and numerous other works by Frank Lloyd Wright – many of them visited by special arrangement.

Four nights in Chicago, with visits to the masterworks of the Chicago School and Mies van der Rohe’s Farnsworth House.

Drive through the countryside of Pennsylvania, Wisconsin and Illinois.

Frank Lloyd Wright (1869–1959), his own greatest admirer, said he had to choose between honest arrogance and hypocritical humility. Frustratingly, visiting his work makes this seem fair: in an extraordinarily long career Wright created a modern organic architecture infused with the artistic freedom and reverence for nature of his nineteenth-century American inheritance.

Wright embraced the Arts and Crafts, Japanese art and architecture, as well as the material advances of steel and concrete cantilevers to ‘break the box’. Interiors merge inside and out, with their fluid plans reverently anchored by their great hearths. Exteriors stress continuity with nature, and brilliantly amplify their location; be it the Wisconsin hills of Taliesin, or the Pennsylvanian gorge of Fallingwater.

That Chicago was the centre of Wright’s sphere is no coincidence. Carl Sandburg’s ‘City of Big Shoulders’ is still the continent’s most enjoyably assertive and distinctly ‘American’ city. Following the fire of 1871, it reinvented itself as the first modern metropolis, with the ‘Chicago School’ developing the technical means for, and artistic expression of, a new kind of city, and of course, the skyscraper. Little wonder that it became so natural a home to the New Bauhaus and Mies van der Rohe, through whose elegantly sparse work Chicago’s influence extends to this day.

As well as building, Chicago’s citizens collected; and the Chicago Art Institute quickly established itself as one of the great galleries of America; a status shared by the Carnegie collection in Pittsburgh where the tour begins. Beautifully sited on the confluence of two rivers, Pittsburgh epitomises American self-belief and its capacity for self-regeneration, and is unrecognisable from its former ‘rust-belt’ image. Santiago Calatrava’s Milwaukee art museum, spreading out over Lake Michigan, bears equal testament to that city’s revival.

In contrast to these urban scenes, the tour meanders through the gently prosperous mid-western countryside of three states, staying in the leafy university town of Madison sited on the isthmus between two lakes, and finishing at Mies’s sublime Farnsworth House on the banks of the Fox river.

Pittsburgh. Fly at c. 4.45pm (British Airways) from London Heathrow directly to Pittsburgh, arriving c. 7.45pm (total flying time c. 7½ hours). Set between the Allegheny, Monongahela and Ohio rivers, Pittsburgh is modern, dynamic, sleek, the smoke and steel of the past having been replaced by glass and aluminium. Carnegie, Frick and Mellon, great patrons of the arts, all made their money here before moving to the East Coast. First of three nights in Pittsburgh.

Pittsburgh. Begin with a walk around Pittsburgh passing H.H. Richardson’s Allegheny Courthouse, the Mellon bank building and Philip Johnson’s PPG Place. The Carnegie Museum of Art has an extensive and varied collection including the Heinz Architectural department, European and contemporary art. End with a cable car ride up the Duquesne Incline.

Fallingwater, Kentuck Knob. Drive out to Fallingwater, quintessential Frank Lloyd Wright (1936). In a spectacular setting amongst the woodland of Bear Run nature reserve, the house seems to grow from, and float above, the water and rocks. You will see not only the waterfall but experience it from inside the house; ‘the most sublime integration of man and nature’ (New York Times). Kentuck Knob (Wright 1953), a hexagonal building with panoramic views of the Pennsylvanian countryside, now owned by Lord Palumbo.

Pittsburgh to Madison. Morning flight to Chicago and from there continue by coach to Madison. Stop en route in Rockford to visit the Laurent House, commissioned in 1951 by Kenneth and Phyllis Laurent and their home until 2012. First of two nights in Madison.

Spring Green, Madison. Set in the beautiful Wisconsin countryside just outside Spring Green lies Wright’s former home and studio, Taliesin. Here he established the Taliesin Foundation to train architects; Hillside School (1932) exemplifies Wright’s break away from the ‘Victorian box’. The Romeo and Juliet Windmill and several homes and farms designed for members of Wright’s family are also seen from the exterior.

Madison, Milwaukee. Walk to the Monona Terrace Community and Convention Center, a monumental civic building set on the shores of Lake Monona (based on Wright’s 1938 design, it was completed in 1997). The Unitarian Meeting House (1946) is distinguished by its soaring copper roof and glass-prowed sanctuary. Drive to the excellent Milwaukee Art Museum to see the Prairie School Archives, with free time for the collection of European and 20th-cent. American art. End the day with a visit to one of Wright’s American System-Built homes (1916). Overnight Milwaukee.

Wind Point, Racine, Chicago. At Wind Point visit Wingspread: the expansive low-lying building designed for the head of the Johnson Wax Corporation. Continue south to Racine on the shores of Lake Michigan and the Johnson Wax Building built in 1936 with its half acre Great Workroom, unique mushroom columns and innovative use of glass. Drive further south still to Chicago; our hotel is in Burnham & Root’s restored Reliance Building, the first ‘skyscraper’ built in the 1890s. First of four nights in Chicago.

Chicago. The morning walk looks at the outstanding monuments of ‘The Loop’ to which Wright, Mies van der Rohe, Louis Sullivan and Frank Gehry have all contributed. Afternoon at the Chicago Art Institute, extended by Renzo Piano; the architectural courtyard contains several interesting pieces of sculpture and art glass from former Wright and Sullivan buildings. See also a reconstruction of Sullivan’s stock exchange trading room. Free time to enjoy one of the world’s great art galleries.

Chicago. Drive to the South Side to the Mies van der Rohe-designed Illinois Institute of Technology (1940–56), with additions by Rem Koolhaas. Continue to the Robie House (FLW 1910); epitome of the Prairie Style. The afternoon is free; we suggest an architectural cruise along the Chicago River, or a walk along the Magnificent Mile.

Oak Park. In Oak Park visit Wright’s Chicago home and studio (1889) for 20 years and the birthplace of the Prairie School of architecture: ‘I loved the prairie by instinct as a great simplicity… I had an idea that the horizontal planes in buildings, those planes parallel to earth, identify themselves with the ground, make the building belong to the ground’. The surrounding residential streets are home to a number of Wright designs. (The Unity Temple is closed for restoration).

Chicago, Plano. Drive at midday into the Illinois countryside to Plano. Here, built beside the Fox River, is one of Mies van der Rohe’s most significant works, the Farnsworth House (1951). Continue to Chicago O’Hare airport, arriving by 5.45pm (in time for the direct flight to London, departing c. 9.15pm).

London. Arriving at London Heathrow at c. 11.00am.

A number of these buildings are not usually open to the public and it is possible we will not be able to include everything listed. 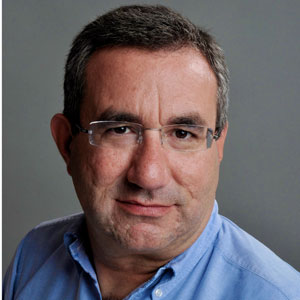 Specialist in architectural history from the Baroque to the 20th century with a wide knowledge of the performing arts. He graduated in Psychology and Art History from Carleton College, Minnesota and studied at the Louvre School of Art History in Paris. Since 1987 he has lived in Berlin and has organised and led many academic tours in Germany. Tom has a particular interest in the German and American architectural and artistic modern including the Bauhaus and Expressionism.

Flights with British Airways (World Traveller) day 1 from London to Pittsburgh, day 11 from Chicago to London, and day 4 from Pittsburgh to Chicago with United Airlines (economy class); private coach throughout; hotel accommodation; all breakfasts, 2 café lunch, and 7 dinners (2022) or 6 dinners (2023) with wine, water and coffee (plus meals on flights); all admission charges; donations for private visits; all tips; all state and airport taxes; the services of the lecturer and tour manager.

Not flying with the tour from London

The internal flight on day 4 from Pittsburgh to Chicago is still included in the price. Hotel accommodation is included on day 1. The group arrives late and so dinner is not included on the first evening (meet the lecturer and tour manager on the morning of day 2).

British citizens can enter the USA without a visa by applying for a visa waiver online. We will advise on this. If you have travelled to Iran, Iraq, Syria, Sudan, Yemen, Libya or Somalia since March 2011 you are not eligible for the waiver and will need to apply for a visa.

Kimpton Hotel Monaco, Pittsburgh: centrally located, comfortable rooms, good amenities. Standard rooms have little outlook; river view rooms available on request. Madison Edgewater Hotel: on the shores of Lake Mendota with fine views from rooms and public areas. The Pfister, Milwaukee: a historic hotel with grand public areas. An Iconic Hotel, Chicago: boutique hotel in the landmark Reliance Building; good location in ‘The Loop’ and within walking distance of the Chicago Institute of Art. Single rooms are doubles for sole use throughout.

This is a tiring tour with a lot of walking and standing around, and a fair amount of coach travel. Average distance by coach per day: 50 miles. 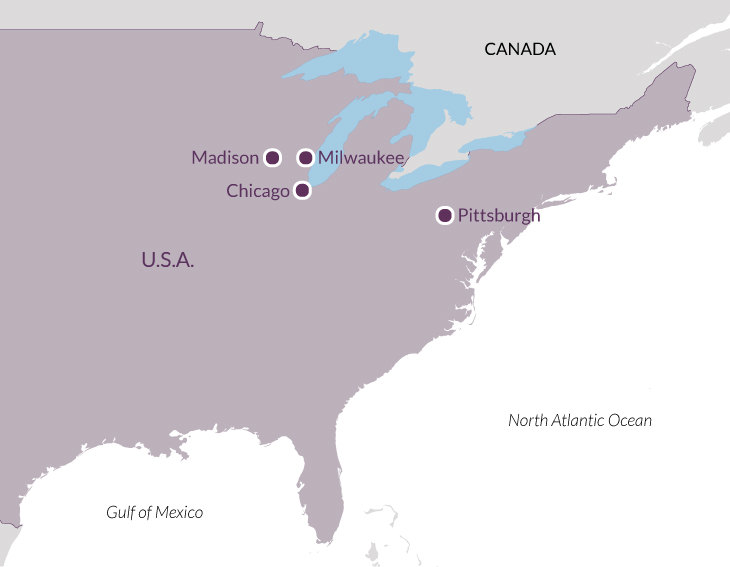 'For me this was a life-enhancing tour which has left me with so many vivid memories that will forever hold me in their thrall. It was perfect in every detail.'

'This exceeded my expectations. There was so much variety in every sense. The whole trip was intellectually stimulating.'

'Excellent: Not a minute was wasted; I am still trying to digest what I have seen.'

'Our appreciation of FLW and Mies van der Rohe rose steadily as the days passed. Both the lecturer and the tour manager added enormous value to the tour. One of our most enjoyable.'

'Tom was wonderful. Extremely knowledgable with the ability to enthuse us and teach us at the same time. An absolute powerhouse to travel with. Can't recommend him highly enough.'

'Heather was wonderful. She is extremely efficient with a special aura of calm. Nothing was too much trouble. All this served along with a sense of fun and humour.'

‘Your contacts and ability to get us privileged access to private properties gave the tour special value.’