Leonardo 500 - Tracing the roots of the Renaissance master

Works by the artist and places associated with his life in Vinci, Florence, Milan, Amboise and Paris.

Vinci, his birthplace, has a museum dedicated to Leonardo’s scientific achievements.

An extended itinerary with two days in France, where Leonardo spent his final years.

2019 marks the 500th anniversary of the artist’s death – visit a blockbuster exhibition at the Louvre in Paris, among others.

Florence was the cradle of the Renaissance and home to an unrivalled quantity of first-rate, locally produced works of art. At the age of fourteen, Leonardo moved here to become an apprentice to Verrocchio, in whose studio his technical training began. The tour begins here to explore areas of the city in which the artist lived and worked, as well as seeing important works by Verrocchio in the Bargello and by Leonardo in the Uffizi.

To the west of Florence is Vinci, Leonardo’s childhood town in the Tuscan countryside, a charming place with a fine museum displaying many of his designs for machines and tools. The remote hamlet of Anchiano, in which he was born, is also visited.

In the fifteenth century Milan was capital of the most powerful territory in Italy and, when Leonardo was employed there, probably the largest city in Europe. It was here that he received some of his most important commissions, notably The Last Supper for the wall of the refectory of Santa Maria delle Grazie. Two nights are spent in Milan, with two visits to The Last Supper and also to the Pinacoteca Brera, one of the world’s great galleries, for a study of works influenced by Leonardo.

Two nights are spent in France, where Leonardo spend his final years; a fitting end to a tour commemorating the five-hundred years since his death. To mark this anniversary, museums Europe-wide are offering a multitude of exhibitions, the most significant of which will take place at the Louvre in Paris. The Louvre Abu Dhabi is lending the Salvator Mundi to its Parisian counterpart for the occasion.

Other exhibitions include Leonardo and his Books at Florence’s Museo Galileo and Portrait of a Musician at the Ambrosiana Gallery in Milan. We also visit the Château d’Amboise, located in the area where Leonardo spent the last years of his life, which is offering a range of events to observe the anniversary, as yet unconfirmed.

Vinci, Anchiano. Fly at c. 11.30am (British Airways) from London City to Florence. Drive to Vinci, in the Tuscan hills, where the artist was born. The Museo Leonardiano has one of the largest collections of Leonardo’s technological designs and models constructed from them, housed in a 12th-century castle. Continue through olive groves to the reconstructed farmhouse where Leonardo was born, which now houses some of his early drawings of the Tuscan countryside. First of two nights in Florence.

Florence. A morning lecture is followed by a walk to see the sites of Leonardo’s father’s office and the workshop of his master Verrocchio’s. See the great sculpture museum in the Bargello, which possesses a collection by Verrocchio, including his David, thought to be the likeness of a young Leonardo. In the afternoon visit the Uffizi for several major works by Leonardo, including the Annunciation.

Florence, Milan. The Palazzo Vecchio was the fortified civic centre of the republic and has several rooms designed by Vasari. In the afternoon, travel by first-class rail to Milan for the first of two nights. The first of two visits to Leonardo’s Last Supper is this afternoon. The Dominican friary of S. Maria delle Grazie was lavishly endowed by Duke Ludovico Sforza in the 1490s, the consequences including Bramante’s monumental eastern extension of the church and the Last Supper on the wall of the refectory. First of two nights in Milan.

Milan. The Pinacoteca Ambrosiana has works by Raphael, Bramantino, Luini and other contemporaries and followers of Leonardo. Visit the Brera, one of Italy’s major art collections. Return to Leonardo’s Last Supper for a second viewing (there is a time limit for each visit).

Milan, Paris. Fly at c. 11.00am from Milan to Paris (Air France). Some free time on arrival, or an optional visit to the Louvre’s permanent collection. Overnight in Paris.

Paris, Amboise. The morning is spent at the Louvre, with a focus on the special Leonardo exhibition. Transfer to near Amboise by coach (c. 3 hour drive). Continue to Château d’Amboise, a favoured residence of French royals in the 15th and early 16th centuries. Overnight near Amboise.

Amboise, Paris. The tour ends with a visit the Château du Clos Lucé, Leonardo’s official residence from 1516 until he died in 1519. The park surrounding the Clos Lucé is home to some of the machines invented by da Vinci. Return to Paris by coach, in time to return to London St Pancras by Eurostar, arriving c. 5.45pm.

Flight with British Airways (Euro Traveller, Airbus 319), day 1 from London to Pisa; flight with Air France (economy class, Airbus 318), day 5 from Milan to Paris; rail travel (first class) from Florence to Milan and by Eurostar from Paris to London (standard premier); travel by private coach; hotel accommodation as described below; buffet breakfasts, 1 lunch and 4 dinners with wine; all admissions; all tips; all taxes; the services of the lecturer and tour manager.

Hotel Santa Maria Novella, Florence: a delightful 4-star hotel in a very central location. The Four Seasons, Milan: a 5-star hotel converted from a 15th-century convent in the heart of Milan’s fashion district, retaining many original features. Hotel Édouard 7, Paris: comfortable 4-star hotel, five minutes on foot from the Opéra Garnier. Château de Pray, Chargé: 4-star hotel in a converted château on the river Loire with an excellent restaurant. Single rooms are doubles for sole use throughout.

The tour involves a lot of walking in town centres where the ground is sometimes uneven and pavements are narrow. It should not be attempted by anyone who has difficulty with everyday walking and stair-climbing. Fitness is essential. There is a lot of standing in galleries and the itinerary is busy. Average distance by coach per day: 39 miles.

We choose to travel by train from Florence to Milan because it is less harmful to the environment, quicker and more comfortable than travelling by coach. However, trains can be crowded, there is often little room for luggage, even on the Frecciarossa (Florence to Milan), and buffet cars can run out of food. You will need to be able to carry (wheel) your own luggage on and off the train and within stations. Some train stations do not have escalators or lifts and porters are not always readily available. 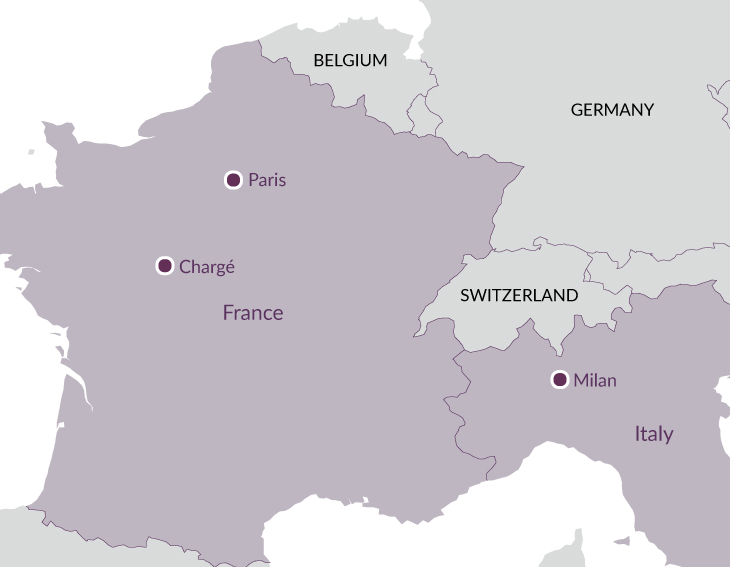