The best of Uzbekistan and some of the most glorious sights in the Islamic world.

Oxiana, Tartary, Turkestan, Khiva, Bukhara, Samarkand: names to produce a frisson. They evoke alluring images of shimmering turquoise domes and exquisite glazed wall tiles, of lost libraries and renowned scholars, of the delicious decadence of the Rubáiyát of Omar Khayyám, of gardens, poetry and wine, of the fabulous riches of the Silk Road between China and Christendom.

Less agreeable images are also evoked: of Ghengis Khan and Timur (Tamerlane), the most far-reaching conquerors in history; of the tyranny and cruelty of the khans, perpetuating the last redoubts of medieval misrule; of the Great Game, the nineteenth-century Cold War between Britain and Russia; of terrain as hostile as the tribesmen and of a post-Soviet penumbra of Stans of suspect politics and allegiances.

The cities of the subtitle lie now in Uzbekistan, independent since 1991 but an entity that has its origins in late nineteenth-century Russian imperialism, which agglomerated a number of independent khanates, and whose borders were settled in the 1920s. The country lies at the very centre of Central Asia. One of only two double land-locked nations in the world, its capital lies a thousand miles north of the Indian Ocean (Afghanistan and Pakistan intervene), 1,400 miles east of the Black Sea and 400 miles from Xinjiang, China’s largely Islamic western province.

Space is not at a premium in this part of the world. Broad tree-lined boulevards encircle the historic town centres and no expanding girdle of high-rise apartments disfigures the approach. The spacious modern capital Tashkent has good museums and galleries; Shakhr-i-Sabz is famed for the breathtaking remains of Timur’s palace. A slave-trading oasis khanate, Khiva, the smallest of these cities, is perhaps the most intact and homogenous urban ensemble in the Islamic world, with biscuit-coloured brick and blue and turquoise maiolica. In Bukhara, gorgeously adorned architecture spanning a thousand years still rises above a streetscape of indeterminate age, while Samarkand has the largest, most resplendently caparisoned historic buildings of all.

Modernity has made relatively unobtrusive inroads throughout and the whitewashed villages and farmsteads with their awnings of vines would hold few surprises for Tolstoy. Since independence, in the wake of economic liberalisation, streets and courtyards are draped with dazzling hued carpets and textiles; the glories of the Silk Road in its heyday are not hard to imagine.

Fly at c. 11.30am (Turkish Airlines) from London Heathrow to Tashkent via Istanbul, arriving Tashkent c. 1.00am. First of three nights in Tashkent. Rooms are available from 2.00pm today for those not flying from London but joining in Uzbekistan.

Tashkent. Nothing is planned before departure from the hotel at 1.00pm for lunch. Begin the afternoon visits in the old town: the Khast Imam complex houses one of the earliest Qur’an manuscripts; a trip on the metro includes stations notable for their colourful ceramic decoration, domed interiors and chandaliers.

Tashkent. The morning is spent at the Chorsu Bazaar and Kukeldash Madrassa, introducing the theme of Soviet reconstruction of Islamic heritage. Afternoon visits to the State Museum of History and Amir Timur Museum.

Tashkent to Samarkand. High-speed train from Tashkent to Samarkand (duration: c. 2 hours; luggage transferred separately). Visit Shah-i-Zinda, an ensemble of mausolea gorgeously apparelled in many types of dazzling glazed tiles, the Afrasiab History Museum, which documents pre-Islamic Samarkand, and the remains of the extraordinary observatory built by Ulug Beg in the 15th century. First of three nights in Samarkand.

Shakhr-i-Sabz. Cross the Hisor Mountains (by car; coaches are not permitted), a dramatic drive with long views down the sun-baked valley the other side. Shakhr-i-Sabz was transformed by Timur (1336–1405) whose home town it was. An astounding survival is the most imposing palace portal in the history of architecture, an arch 22 metres wide with a wondrous range of tiled decoration. Further Timurid remnants include a mosque complex with three turquoise domes.

Samarkand. Begin with the Amir Timur Masuoleum, burial place of Timur. The Registan, ‘the noblest public square in the world’ (Lord Curzon, 1889), is bounded on three sides by magnificent madrassas of the 15th and 17th centuries. Commissioned by Timur in honour of his wife, Bibi Khanum Mosque is an impressive exercise in gigantism despite partial destruction and over-zealous restoration. Gumbaz Synagogue, hidden in the Old Town, was constructed in the 19th century for Samarkand’s Jewish community.

Samarkand to Bukhara. High-speed train from Samarkand to Bukhara (duration: c. 1 hour 30 minutes; luggage transferred separately). Visit Central Asia’s oldest surviving mosque, Magok-i-Attari, before lunch in the hotel. The afternoon walk begins in the social heart of the city, the Lyab-i Hauz square built around a 15th-century pool and flanked by the Nadir Divanbegi Madrassa and Khanaga. Time for tea under the mulberry trees. First of three nights in Bukhara.

Bukhara. Genghis Khan ensured in 1220 that – with notable exceptions, including the Kalyan Minaret at 48 metres then the tallest in the world – little of Bukhara’s first golden age remains, but of the second, the 15th and 16th centuries, there survives much magnificent architecture, lavishly embellished. Today’s walks take in the vast Kalyan Mosque (finished 1514) with a capacity of 10,000, several grand madrassas, the formidable citadel of the khans and the Zindan, their infamous prison. Free afternoon, with an optional excursion to Cheshma-yi-Ayyub, Vabkent, an enclosure of a spring associated with the prophet Job, dating from the early 13th century.

Bukhara. Visit the 12th century Namaz Goh mosque, before moving on to the perfectly preserved 10th-century Mausoleum of Ismail Samani, which displays exquisite brickwork. From here walk through the park to the Bolo Hauz Mosque with its elegant patio of timber columns. The resting place of a Mongol khan, the Mausoleum of Buyan-Khuli Khan still has some fine chipped 14th-century mosaic and terracotta. Next door are the twin domes of the larger Saifuddin Bukharzi Mausoleum. Free afternoon.

From Bukhara to Khiva. The 280-mile journey starts and finishes in an unspoilt landscape of green fields, plentiful trees and adobe farmsteads, while the central section is undulating desert, specked with tufty shrubs that are briefly green in the spring. There are periodic sightings of the meandering Oxus, the mighty river crossed by Alexander the Great in 329 bc. Reach Khiva in time for a walk to the Khan’s palace before dinner. Overnight Khiva.

Khiva. No modern intrusions spoil the timeless fabric within a rectangle of crenellated and turreted ramparts. Most of the buildings are 19th-century, but such was Khiva’s isolation and conservatism that to the inexpert eye they could date to any time from the 16th or even 13th century. The Friday Mosque, a forest of carved wooden columns some dating to the 10th century, the Tash Hauli Palace, whose harem quarters constitute the loveliest secular spaces in Central Asia, and the Paklavan Mahmoud Mausoleum where tiled interiors reach a peak of opulence. Late evening flight to Tashkent, arriving shortly after midnight. Overnight Tashkent.

Lecturer in Arabic at Leiden University and a specialist in the cultural history of the Muslim world. Peter has travelled extensively across the Middle East and Central Asia and has studied at the Universities of Damascus and Isfahan. He held a fellowship at the Museum of Islamic Art, Berlin, where he researched Muslim architecture and Arabic calligraphy, studying monuments of medieval Egypt and Uzbekistan. In Oman, he studied pre-Islamic sites and local shrines dedicated to ancient Arabian prophets in as part of his current research focus on the legends and history of Arabia. His publications include Imagining the Arabs (Edinburgh University Press, 2016), a comprehensive exploration of the Arab people in early Islam, and The Arab Thieves (Brill, 2019), a critical study of Arabian outlaw tales.

International air travel (economy class) with Turkish Airlines: London to Tashkent via Istanbul (aircraft: Airbus 321, Airbus A350-900) and Uzbekistan Airways: Tashkent to London (aircraft: Airbus 321Neo); internal flight between Urgench and Tashkent with Uzbekistan Airways (Airbus 321); travel by private air-conditioned coach, cars (in convoy, for one excursion) and high-speed train between Tashkent and Samarkand and Samarkand and Bukhara; hotel accommodation; breakfasts, 10 lunches and 10 dinners with wine, water and coffee; all admissions; all tips; all taxes; the services of the lecturer, tour manager and national guide.

Internal flight: the flight schedule between Urgench and Tashkent can vary and is not confirmed until c. 4 months before the tour departs. If you choose to take the tour without international flights, this internal flight is still included.

British, Canadian, Australian and New Zealand passport holders, as well as many European citizens, can travel to Uzbekistan without a visa for a period of 30 days. Citizens of the USA need to apply online for an eVisa (current cost is $20 and is not included in the price of the tour). We will advise on this. Citizens of other countries should check their requirements with the relevant authorities.

We use hotels we consider the best available but once out of Tashkent choice is limited. In Tashkent: Lotte City Hotel, Tashkent Palace: spacious, opulent and comfortable or Radisson Blu Hotel: a functional business hotel. In Samarkand: City Hotel, Hotel Malika Prime or Hotel Sultan: all are small, with willing staff and outside terraces (rooftop or courtyard), but fairly basic. In Bukhara: Omar Khayyam Hotel: excellent location in the centre of the old city, adequately comfortable or Hotel Asia: also located in the old part of the city. Madrassa Mukhammad Hotel, Khiva: converted madrassa, impressively restored, each room a former student’s cell opening onto the courtyard.

This is a long and demanding tour which begins with a very late arrival into Tashkent. You will be on your feet a lot, walking and standing around – sometimes on exposed sites in warm temperatures. Fitness is essential. There is one long coach journey but many days with minimal driving. The average distance by coach per day is 51 miles. 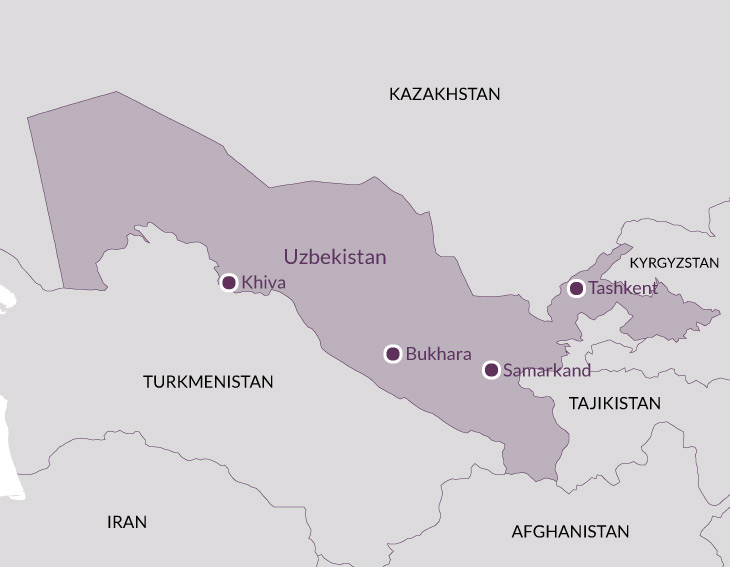 'I have always wanted to visit Samarkand and Bukhara and I am pleased to have done so. The buildings are absolutely fantastic. This trip will be long remembered.'

'It will be the second time I’ve taken this tour with Peter Webb. The first time was one of those life-changing experiences. Peter is, of course a classical Qu’ranic Arabic specialist, so it was wonderful to stand in front of a 30 metre tiled madrassa facade and hear him read around the inscriptions above, simultaneously translating, and literally identifying their chapter and verse.'

'Beautifully planned. I appreciated the balance between the landscapes.'

'The lecturer is superb, young and so enthusiastic about his subject. Approachable, unflappable and diplomatic. Excellent lecturers were given and equally excellent impromptu lecturers and information were also provided.’

'What a happy time we had. I met some very nice people, saw some amazing things that I never thought I would see, and can only thank Martin Randall Travel for a very well planned trip.'

'This was a fantastic holiday which we found fascinating in all respects. Well done MRT.'