2018 marks 500 years since the birth of Jacopo Tintoretto.

Based in Venice throughout, where the artist spent his entire life.

Visits two major exhibitions, at the Accademia and the Doge’s Palace, with works from the Louvre, Prado and National Gallery (London).

Led by Dr Michael Douglas-Scott, whose thesis was on the Madonna dell’Orto where the artist is buried, and has published articles about him.

This year, Venice celebrates the five-hundredth anniversary of the birth of the great Renaissance painter Jacopo Tintoretto (who was born in either 1518 or 1519). The exhibitions being held are the first major ones to be staged in his native city exclusively in his honour since 1937. One takes place in the Accademia Gallery, the other in the Doge’s Palace, and both bring together works by him from all over the world.

This tour contextualises the exhibitions by also considering his works still situated in the Venetian churches and confraternities for which he originally painted them. For, unlike Titian, the true greatness of Tintoretto can only be appreciated in Venice. His work will be compared with that of Titian (who ejected him from his workshop) and his other major rival Paolo Veronese. His most sublime masterpiece is the biblical cycle at the Scuola Grande di San Rocco, where he revealed the true breadth of his religious vision and unfurled his fiery genius.

Tintoretto also worked for much smaller and poorer confraternities of the Holy Sacrament all over Venice, painting an animated series of Last Supper canvasses for the sidewalls of their chapels, stressing a down-to-earth while spiritually engaged version of Counter-Reformation spirituality. His local church and burial site, the Madonna dell’Orto, is the theatre of some of his most dramatic pieces. Working on a colossal scale, his Last Judgement here is among the most terrifying ever painted, rivalling even Michelangelo’s in the Sistine Chapel.

According to his biographer, Carlo Ridolfi, Tintoretto had ‘Il disegno di Michelangelo e il colorito di Tiziano’ (Michelangelo’s sense of form and Titian’s handling of paint) written on his studio wall. His mission was to bring together the figurative complexity of the central Italian mannerist tradition with Venetian openness in the handling of oil paint.

Controversial in his own lifetime, the ‘little dyer’ (Tintoretto) continues to arouse distaste as well as admiration, but none can remain indifferent to his prodigious output. This year provides a once-in-a-lifetime opportunity to understand the full range of Tintoretto’s monumental achievement as one of the truly great firebrands of the Venetian pictorial tradition.

Spend the entire morning in the Gallerie dell’Accademia, Venice’s major art gallery. Works by Tintoretto housed here include his Miracle of the Slave, the Creation of the Animals and the Murder of Abel. The gallery also hosts an exhibition covering the artist’s emergence as a painter challenging the dominance of Titian, with works from major public and private collections. In the afternoon, visit the Scuola Grande di San Rocco – the grandest of all confraternity premises, the halls are decorated with a magnificent cycle of dynamic and highly charged canvasses by Tintoretto.

Today, compare Tintoretto with his rivals Titian and Veronese. Visit the flamboyant church of the Gesuiti, S.ta Maria Assunta, which houses Tintoretto’s Assumption altarpiece and Titian’s Martyrdom of St. Lawrence. See more late Titian at S. Salvatore (his Annunciation), as well as decoration by Veronese at S. Sebastiano.

Visit the Palazzo Ducale, supremely beautiful with its 14th-century pink and white revetment. Tintoretto’s last work, Il Paradiso, is one of the world’s largest paintings. The second part of the exhibition is held here, and showcases his rise to maturity, with some seventy works and drawings illustrating his creative process. In the afternoon cross the bacino to Palladio’s beautiful island church of S. Giorgio Maggiore, which contains a Tintoretto Last Supper. Also visit the Marciana library at the Museo Correr to see paintings by Tintoretto and Veronese in the reading room.

The final morning of the tour focuses on the Chiesa della Madonna dell’Orto, the burial place of Tintoretto, which also contains two of his laterali as well as the Presentation of the Virgin Mary. Travel by motoscafo to Venice airport. Fly to London Gatwick, arriving c. 7.00pm.

At the time of going to print, the Venice Civic Museums Foundation was unable to confirm which works will be part of the two exhibitions. There may be changes to the itinerary depending on which are included and which are on loan from other venues in Venice.

The nature of Venice means that the city is more often than not traversed on foot. Although part of her charm, there is a lot of walking along the flat and up and down bridges; standing around in museums and palaces is also unavoidable. The tour should not be attempted by anyone who has difficulty with everyday walking and stair-climbing. Fitness is essential. 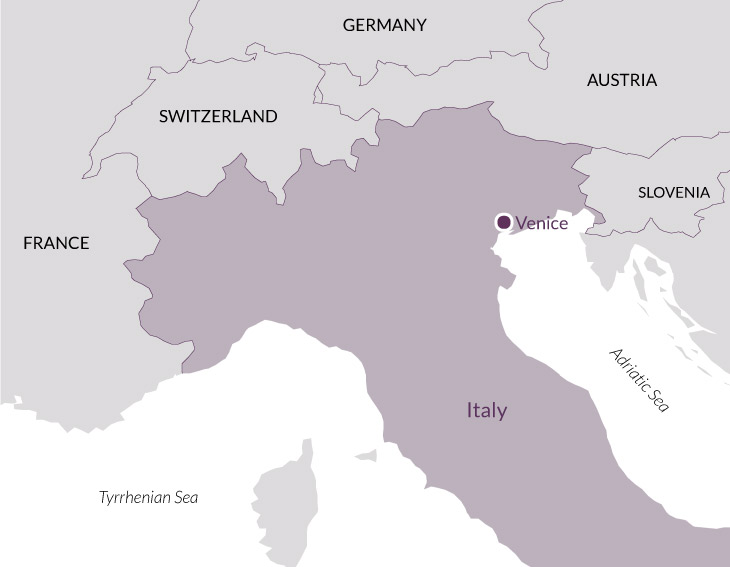