A ground-breaking journey through one of the most politically complex and fissiparous yet fundamentally similar regions of Europe.

This journey takes us to borderlands where, for much of their history, the South Slavs have been divided by competing empires and cultures. In Serbia, the Nemanjić dynasty flourished from the 12th until the 14th centuries and built monasteries that combined Byzantine and Romanesque influences. But from the early-15th century (following the defeat of Prince Lazar in 1389) until the mid-19th century, the Ottoman Turks ruled Serbia, Bosnia and much of Slavonia. Meanwhile, the Habsburg Empire reached south into Croatia, and Venice dominated the cities of the Adriatic coast.

The modern politics and structure of the Western Balkans were defined by the Congress of Berlin in 1878; the Paris Peace Conference in 1919, which created the first Yugoslavia; the Second World War, which ravaged the region and gave birth to Tito’s Yugoslavia; and, most recently, the maelstrom of the 1990s and the emergence of the present seven independent states.

What are the Western Balkans like now? There has been a major change in the past decade. The capitals and main cities that we shall visit are all lively and welcoming, but each retains a distinct character. Croatia is prosperous and joined the EU in the summer of 2013. Its historic links to Vienna and Budapest can be seen clearly in Zagreb and Osijek.

Our other destinations are more complex and multi-layered. Belgrade is historically the extension of a strategic Ottoman citadel overlooking the Danube and Sava. It has fine and varied architecture (including some from the Art Nouveau period) and a cosmopolitan feel. Sarajevo combines mosques, Orthodox churches, squares and kafanas in a mountainous setting. Its troubled history is not far below the surface.

The smaller Bosnian towns on our route (Višegrad, Mostar and Trebinje) have great charm. Kotor – in Montenegro – is a small fortified Venetian port city with a Romanesque cathedral on the shore of a fjord. Visits to the old capital, Cetinje, and the coast will offer insights into Montenegro’s history and strongly independent national character.

One particular feature of this journey is that it takes in remote and functioning Serbian Orthodox monasteries that are of exceptional architectural and artistic interest, and include unesco World Heritage sites.

This tour is emphatically a journey, with some long days and much driving through hilly terrain. The late-spring and autumn departures will show the magnificent countryside at its best.

Zagreb. Early morning flight (British Airways) from London Heathrow to Zagreb. Lunch is served upon arrival followed by an orientation walk, including a visit to the State Archives. First of two nights in Zagreb (Croatia).

Zagreb. The westernmost place on this tour, the capital of Croatia ranks with the loveliest cities of Central Europe. Walk to the upper town, the Kaptol district, via the bustling market and visit the Croatian Museum of Naïve Art, and the Gothic Cathedral of the Assumption. After lunch there is a free afternoon to explore Zagreb independently. Overnight Zagreb.

Zagreb, Osijek. Drive through Croatia’s rustic north-eastern region of Slavonia, via lunch at a vineyard, to Osijek. Located on the River Drava amid gently undulating countryside, Osijek is the administrative centre of Slavonia. There is a remarkably unspoilt 18th-century quarter built by the Austrians as their military and administrative headquarters when they pushed back the Turks, with cobbled alleys and fortress walls. Overnight Osijek (Croatia).

Ilok, Novi Sad. Pass through Vukovar, the Croatian town worst damaged by the 1991 war. Stop near Ilok, a picturesque fortified settlement on a bluff high above the Danube. Cross the river into Serbia and spend the afternoon in Novi Sad. This has a picturesque core with buildings from the 18th century. Onwards and, across the Danube, the massive fortress of Petrovaradin which was pivotal in Prince Eugene’s wars with the Turks. First of two nights in Belgrade (Serbia).

Belgrade. With its broad avenues and imposing public buildings, Belgrade is unmistakably a capital and instantly recognisable as a Balkan one. After Diocletian divided the Roman Empire in the late third century ad, it became the westernmost stronghold of the eastern portion. Its kernel is a citadel on a hill above the meeting of the Danube and Sava rivers, which holds the record for the number of times it has changed hands between hostile powers. Most of the city’s architecture dates from the late 19th century onwards. Liveliness is provided by the café culture typical of the Balkans. Overnight in Belgrade.

Belgrade, Manasija. Free morning in Belgrade. Then begin three days visiting what Serbia does best, medieval Orthodox monasteries. Tucked in a wooded valley, Manasija is ringed by surely the highest and stoutest walls of any monastery anywhere, built in the early 15th century in expectation of the inevitable Turkish assault. Frescoes of the highest quality – a late flowering of Byzantine art – survive well. First of two nights in Kraljevo (Serbia).

Studenica, Sopoćani. This includes a drive through spectacular mountain scenery. We visit two more superb medieval monasteries, Studenica and Sopoćani. Both are located in remote and beautiful valleys; both have amongst the finest 13th- and 14th-century Byzantine frescoes to survive anywhere. We stop briefly near the Bosniak town of Novi Pazar in the Sandžak. Overnight Kraljevo.

Sarajevo. Famously squeezed by high tree-clad hills at the head of a river valley, Sarajevo was founded in the 15th century by the Ottoman Turks in the wake of their steady conquest of the Balkan Peninsula. The various assorted mosques, churches and synagogues highlight the pluralist nature of the city. It is possible to stand where Gavrilo Princip assassinated Archduke Franz Ferdinand; in the adjacent museum it is strangely moving to see the trousers of the man who started the First World War. Overnight in Sarajevo.

Sarajevo, Mostar. Free morning in Sarajevo. Drive over the mountains that encircle the city and following the Neretva river, we arrive in Mostar in the afternoon. A thriving trading town since Herzegovina came under Ottoman rule in 1482, this is Bosnia-Herzegovina’s most picturesque town, an open-air museum with narrow cobbled streets and original Ottoman architecture. At its heart is the Old Bridge, shelled until it collapsed in 1993 and rebuilt in 2004. Overnight Mostar (Bosnia-Herzegovina).

Stolac, Trebinje, Tivat. This is wine country, and after a stop in the quiet Ottoman town of Stolac, lunch is at a winery in Trebinje, the southernmost city of Bosnia-Herzegovina. Walk around the historic walled town and a country market. In the afternoon cross from Bosnia-Herzegovina to Montenegro and descend into the Bay of Kotor. First of three nights in Tivat (Montenegro).

Kotor, Perast. Kotor nestles at the foot of high hills, a harbour on a sheltered fjord off the Adriatic. This diminutive city retains its fearsome ramparts, much unspoilt streetscape and an astonishing Romanesque cathedral incorporating Roman columns. In the later afternoon drive around the fjord to Perast, perched between towering mountains and the water, with large mansions, medieval to Baroque. A short boat ride allows a visit to an island church, Our Lady of the Rock, before lunch on the water’s edge. Overnight Tivat.

Cetinje, Njeguši. A mountain drive to Cetinje, which until the end of the First World War was the capital of Montenegro and still retains the echo of uniforms, a royal court and Balkan diplomacy. Visit the Palace of King Nikola, the Art and History Museum and former embassies. In the afternoon visit the historic village of Njeguši on the slopes of Mount Lovćen. Final night in Tivat.

Tivat. Fly from Dubrovnik, arriving at London Heathrow in the afternoon. 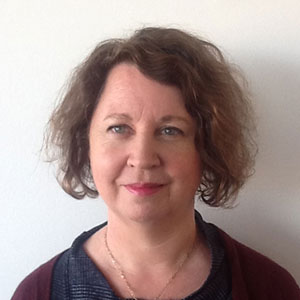 Flights (economy class) with British Airways (aircraft: Airbus 320); travel by private air-conditioned coach; hotel accommodation; breakfasts, 10 lunches and 9 dinners with wine, water and coffee; all admissions; all tips; all taxes; the services of the lecturer, tour manager and local guides.

Not required for British citizens. Citizens of Australia and the US do not require visas for tourist stays of up to 90 days.

The Regent Esplanade Hotel, Zagreb: grand 5- star hotel within walking distance of the city centre. Hotel Osijek, Osijek: a modern and comfortable high-rise hotel on the bank of the river Drava. Hotel Moskva, Belgrade: a well-located and comfortable hotel built in 1926 with a great deal of character, recently renovated. Hotel Crystal, Kraljevo: simple but adequate and with welcoming service, the only acceptable hotel in a region with little tourism. Hotel Europe, Sarajevo: a centrally located 5-star hotel, the best in the city, built in the late 19th century but comprehensively renovated. Hotel Mepas, Mostar: a modern business hotel just a short drive from the historic centre. Regent Porto Montenegro, Tivat: a luxurious 5-star hotel located on the shores of the unesco-protected Bay of Kotor. Single rooms are doubles for sole use throughout.

A good level of fitness is essential. There is a lot of walking in the city centres, some of it on uneven ground and up and down steep flights of steps. Though the average distance by coach per day is 65 miles, many roads are slow and mountainous and some travelling days are long. Border crossings may entail minor delays. There are 6 hotel changes. 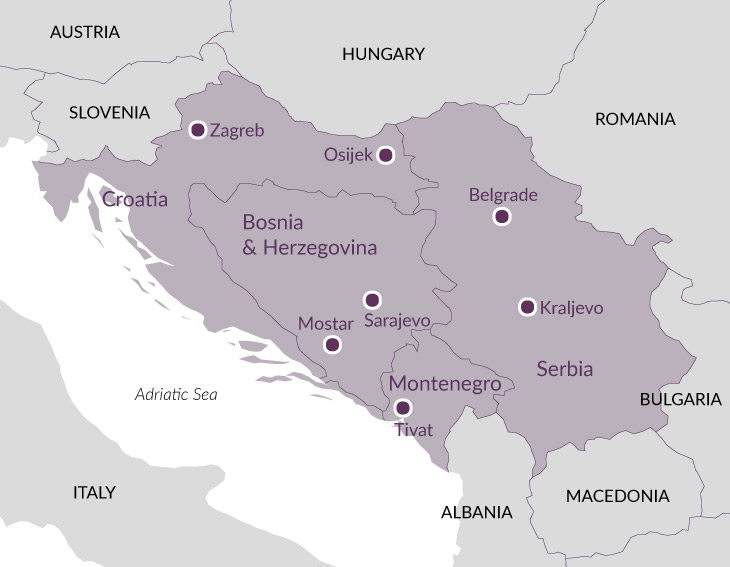 'We took this tour because we really wanted to learn about the Balkans. It accomplished this far beyond our expectations.'