Gardens of the Bay of Naples - With Ischia, Capri and the Amalfi Coast

Visit a family-owned lemon grove on the Sorrento peninsula, with tastings, and two villa-gardens at Ravello.

Many foreign visitors have left accounts of their first sight of the Bay of Naples – all have been overwhelmed. The footprints of ancient craters have left crumbled cones, semicircular inlets, islands, thermal pools and fumaroles, all presided over by the silhouette of the most famous volcano in the world. Perhaps it is this sense of foreboding which has brought so many aesthetes here to set aside their work and bask instead in the glory of the here and now.

The flanks of every volcano gradually yield deep and fertile soil. This, combined with an excellent climate, has led to a landscape covered in vines, lemons, olives and figs. From the mid-19th century onwards, expatriate settlers began to use this soil to make pleasure gardens as a foreground to the dramatic views along the Amalfi Coast. Some were earnest philanthropists, others roués with money to burn, still others refugees from social attitudes back home. Their feelings are summed up in Tchaikovsky’s Capriccio Italien.

The sybarites began their work here early. Though we may only imagine the seaside villas of holidaying Roman emperors, we can actually stand in the gardens of their patrician citizens at Pompeii. The best examples of artefacts from those gardens are on view in the great Archaeological Museum in Naples. And on a larger scale, the cascade at Caserta made for the Bourbon monarchs will give some idea of Baroque ambition.

Sailing to the fabled islands of Ischia and Capri will keep us in touch with the litany of lotus-eaters who made their homes and gardens there over the centuries. The reasons they all came are still here, waiting to be explored.

Naples. Visit the National Archaeological Museum, one of the world’s greatest collections of Greek and Roman antiquities. Original garden artefacts from Pompeii and Herculaneum are superbly presented here, including statues, frescoes and mosaics of startling and moving beauty.

Ischia. Travel by hydrofoil to the volcanic island of Ischia. Developed since 1956 by the late Susana Walton and overseen by Russell Page, La Mortella is one of Italy’s outstanding private gardens, a clever fusion of art and exceptional planting. Lunch at leisure before returning to Naples by boat.

Caserta. Situated a few miles outside Naples, the delightful gardens at Villa Porfidia, laid out in the second half of the 18th century,  retain their period charm. The nearby royal palace at Caserta, begun 1751, is Italy’s most magnificent and accomplished emulation of Versailles. An awesome absolutist statement, it is set within parkland and gardens equally magnificent in scale. Lunch is in a private villa.

Gardens of Pompeii, Massa Lubrense, Sorrento. Drive to Sorrento via Pompeii. Since its first exploration during the 18th century, the site has been one of the world’s most famous archaeological excavations. The numerous dwellings offer insight into the planting schemes and garden layouts with their peristyle courtyards, water features, mosaics and frescoes. Lunch is at a family-owned lemon grove near Sorrento. First of three nights in Sorrento.

Ravello. Drive across the Sorrento peninsula to Amalfi, where a coach completes the climb to Ravello, situated in the hills with thrilling views of the coastline. Visit the evocative garden of Villa Rufolo, a wonderful 13th-century palace. Also see Lord Grimthorpe’s vast Anglo-Italian garden at Villa Cimbrone, a charming muddle of the classical, Gothic and the Edwardian under a vast pergola. Return to Sorrento by Hydrofoil.

Capri. Travel by hydrofoil to the island of Capri to visit Villa San Michele, Axel Munthe’s visionary house and garden high on the mountain. It is a place of singular atmosphere, ideally arranged for serene contemplation.

Flights (Euro Traveller) with British Airways (Airbus 320); travel by private coach throughout; hotel accommodation; breakfasts, 3 lunches (including 1 picnic) and 4 dinners with wine, water, coffee; all admissions; all tips; all taxes; the services of the lecturer.

Hotel Excelsior, Naples: a 4-star hotel on the waterfront with spectacular views of Mount Vesuvius and the island of Capri. Sea views are available on request and for a supplement. Imperial Hotel Tramontano, Sorrento: a 4-star, 19th-cent. grand hotel situated on Sorrento’s clifftop with a garden and good access to the town centre.

There is a lot of walking. Pavements in Naples are often uneven, some roads are steep, traffic can be unpredictable. Some of the gardens are extensive with uneven ground. Participants need to be fit and sure-footed. Hydrofoil journeys can be affected by conditions at sea. Average distance by coach per day: 30 miles. 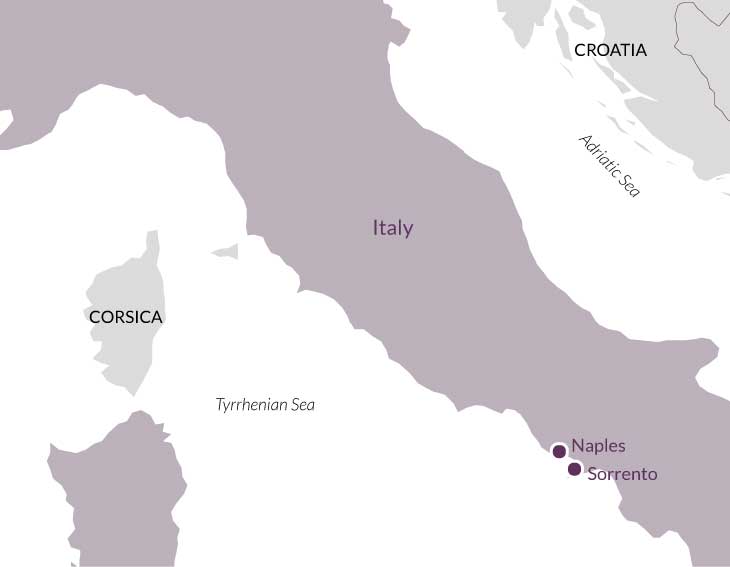