Includes a top category ticket to Il Viaggio a Reims at the Teatro alla Scala in Milan.

Lecturer Fred Plotkin is a world-famous Italy expert, author of Italy for the Gourmet Traveller and former director at the Teatro alla Scala.

Lombardy – Lombardia – is the region of Italian excellence, the place that sets modern standards for much of what Italy is admired for around the world. It is one of the country’s most geographically diverse areas and with that comes a remarkable variety of food and wines that make its cucina among the most sophisticated in Italy.

The region contains the famous Lake District, including Lake Como, the deep blue jewel that is the most beautiful of them all, as well as the nearby Valtellina, a glorious and undiscovered swath of the Italian Alps that produces the region’s best wines and rustic mountain food. Noble cities such as Milan, Cremona and Bergamo each have their own rich traditions, and in Lombardy one also finds hill towns and broad fertile plains. Its southern border is the Po, the largest river in Italy.

Such geographic diversity provides a feast of ingredients to cook with. They include wild mushrooms, berries, rice, corn for polenta, wheat for pasta and baking, fish from lakes and rivers, prized cattle, and more cow’s milk cheeses than any other region of Italy, including Parmesan, Stracchino, Taleggio, Bitto and Gorgonzola.

Lombardy has known its share of geniuses. Leonardo da Vinci lived in Milan, the region’s capital, for 25 years and introduced engineering, design, canals and modern irrigation for agriculture. He also wrote his codices here, those precious volumes that reflect his restless imagination and contain his innovative inventions. And he painted, including the Last Supper in the church of Santa Maria delle Grazie. Claudio Monteverdi, the first great opera composer, was born in Cremona, and Giuseppe Verdi, Italy’s titan of opera, lived much of his life in Milan. Gaetano Donizetti, whose operas often depicted royals and nobles from the United Kingdom, was from Bergamo.

This tour is a unique combination of the very best elements the region has to offer, whether musical, gastronomic or artistic. To savour Lombardy is to experience all the pleasures of life, gratifying the eye, ear, nose, palate and soul. It is the region of cultivated sensuality.

Fly at c. 12 noon (British Airways) from London Heathrow to Milan Linate. Drive to Bellagio, among the loveliest and most romantic spots on earth. First of three nights in Bellagio.

Lake Como. Spend the day on land and water, travelling exclusively by boat. Visit Como and see a glorious lakeside villa. Built as a summer residence for a Milanese aristocrat on the western shore of Lake Como, the Villa Carlotta combines dramatic terracing, parterre and grottoes with an extensive landscape park and arboretum. The house contains notable collections from the Napoleonic period.

The Valtellina. Just north of the lake is the Valtellina, a valley that opens to Lombardy’s alps. Some of Italy’s top red wines come from here, and there is a tasting with delicious local cheeses at one of the region’s best producers. This zone is famous for numerous local foods, among them pizzoccheri, a buckwheat pasta served with cheese, greens, potatoes and garlic – ideal paired with local red wine.

Bergamo. Leave Bellagio to travel to an exceptional family-run trattoria near Bergamo. With its own herb garden, vegetables and fruit, this restaurant is beloved for the freshness of its flavours and fidelity to local food traditions. Continue to Bergamo, birthplace of Gaetano Donizetti, and visit the Basilica, founded in 1137. The Cappella Colleoni was built on the orders of Bartolomeo Colleoni, who destroyed the sacristy of S. Maria Maggiore in order to use the site as a personal shrine to himself and his daughter Medea. Travel on to Milan for the first of three nights.

Cremona. This glorious town in the Po Valley gave the world Claudio Monteverdi, the first great opera composer, as well as the Stradivari, Amati and other families of luthiers whose stringed instruments have been the world’s best for more than 300 years.

Milan. Morning lecture by Fred Plotkin on Rossini’s Il Viaggio a Reims, followed by a visit to La Scala’s remarkable museum. Lunch at one of Milan’s temples of gastronomy, situated inside the opera house. Some free time in Milan. Evening opera at the Teatro alla Scala: Il Viaggio a Reims.

Flights (Euro Traveller) with British Airways (Airbus 320); travel by private coach; hotel accommodation as described below; breakfasts, 4 lunches and 3 dinners with wine, water, coffee; all admissions; all tips; all taxes; the services of the lecturer and tour manager. Music: an opera ticket (top category) for one performance is included, costing c. £350.

Grand Hotel Villa Serbelloni, Bellagio: excellently situated on the edge of the lake, a historic 5-star hotel with lavishly decorated public rooms and well-appointed bedrooms (they vary in size). Rooms with a lake view are available on request and for a supplement. Rosa Grand Hotel, Milan: smart 4-star hotel excellently located directly behind the Duomo. Rooms are well appointed in a clean, modern style.

Visits require a fair amount of walking and standing around. There is one late night after the opera but the start is leisurely the following day. Some days involve a lot of coach travel. Average distance by coach per day: 58 miles. 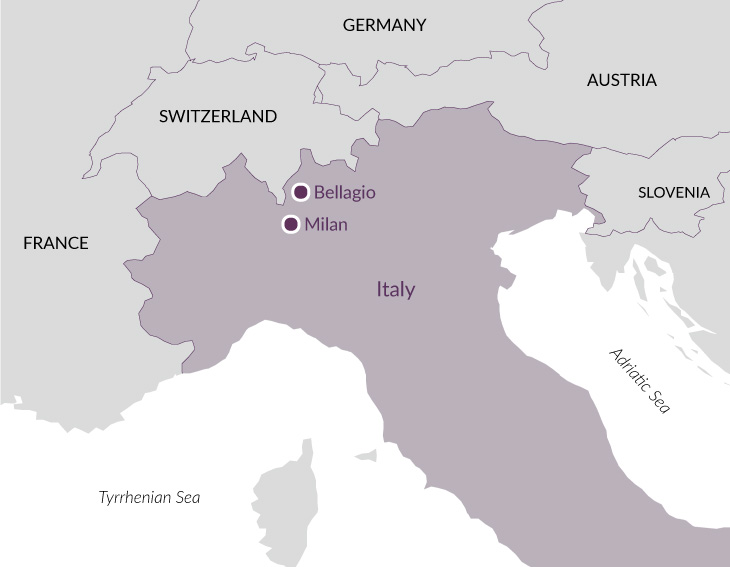 'Fred Plotkin is so knowledgeable about both food and opera, we came away with all manner of new found information.'